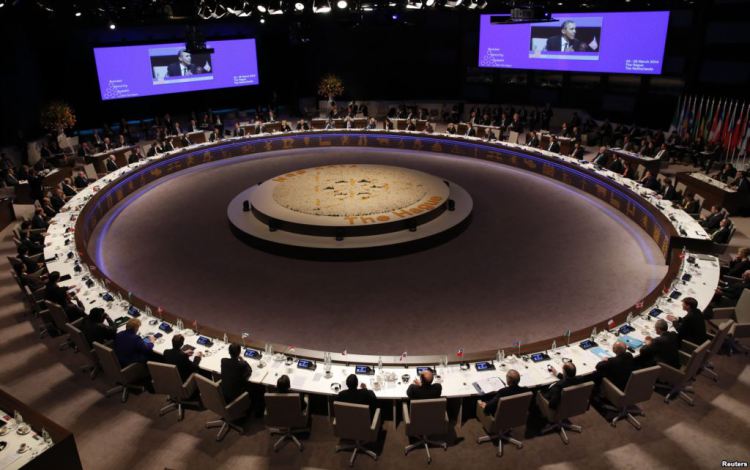 When over fifty world leaders gather in Washington on March 31 for the fourth Nuclear Security Summit, Iran will be absent from the table.

Tehran’s exclusion from the first three summits in 2010, 2012, and 2014 is understandable. Given international allegations of illicit nuclear weapons development and UN Security Council Resolutions calling for a suspension of some nuclear activities, Tehran’s participation would have distracted from the summits’ narrow focus on securing nuclear materials and preventing nuclear terrorism.

But the failure to invite Iran to the fourth and final Nuclear Security Summit is a missed opportunity to work toward reintegrating Iran into the international nuclear order and encouraging Tehran to enhance the security and safety of its nuclear program.

The nuclear deal reached between Iran and six countries (China, France, Germany, Russia, the United Kingdom and the United States) in July allayed immediate concerns that the Iranian government may choose to pursue nuclear weapons. The combination of limiting Iran to producing small quantities of low-enriched uranium (far below the necessary 90 percent enrichment levels needed for nuclear weapons), and putting in place a multilayered monitoring and verification regime provides assurance that Iran could not make a move toward nuclear weapons without quick detection.

But the risk of nuclear terrorism remains. Events over the past several years, such as the Islamic State surveillance of Belgium nuclear facilities, the Fukushima disaster in Japan, and missing radiological sources in the United States, demonstrate that every country must take steps to continuously improve its nuclear security and safety. Iran, for instance, still possesses a small quantity of weapons-grade uranium (900 grams, far less than the standard 25 kilograms used for a bomb) and poorly-secured radioactive sources that could be used in a dirty bomb.  Iran’s Bushehr nuclear plant could be targeted in an act of nuclear terrorism that would have devastating regional consequences.

Currently, Iran is not providing adequate assurances that its nuclear activities are protected against acts of nuclear terrorism. A recent report by the Nuclear Threat Initiative ranked Iran most at risk for sabotage to a nuclear facility, in part because Iran does not publish nuclear security laws or regulations so it is unclear what steps Tehran is taking to secure facilities such as the Bushehr reactor.

The summit’s unique commitment-making model would have been an ideal vehicle for Iran to take steps unilaterally and multilaterally to make the much-needed upgrades in safety and security at its nuclear facilities. At each summit, states are encouraged to bring “house gifts,” which are pledges to take action to strengthen domestic nuclear security. These pledges range from commitments to eliminate stockpiles of nuclear materials, to updating domestic laws and regulations, to holding workshops, or ratifying treaties. Fulfillment of these national commitments account for some of the most significant advancements in nuclear security over the past six years.

The nuclear deal with Iran laid out a number of areas for improving safety and security at Tehran’s nuclear facilities in line with the summits’ goals and recommendations. The nuclear agreement endorses holding training courses to strengthen Iran’s ability to prevent, protect and respond to nuclear security threats, strengthening Iran’s ability to protect against sabotage, putting in place effective physical protection systems, establishing a Nuclear Safety Center, and upgrading reactor equipment to meet safety concerns.

The high-level political attention generated by this heads-of-state process at the summits could have served as a forum to encourage Iran to make specific commitments to act on the areas laid out in the agreement.

Iran also has not signed on to key nuclear security treaties. Participation in the summit would have been an opportunity to pressure Iran to take steps to ratify the Convention on the Physical Protection of Nuclear Materials, its 2005 Amendment and the International Convention on the Suppression of Acts of Nuclear Terrorism.

The consensus documents produced at each summit have reaffirmed the central role that these treaties play in strengthening nuclear security and providing assurance to the international community that countries are acting responsibly to secure their materials and encourage ratifications. Action on the physical protection convention would put in place binding standards for securing facilities, materials in storage, nuclear materials in domestic and international transit. The nuclear terrorism convention provides a definition of nuclear terrorism and details how illicit materials should be handled if seized.  The summit spurred over 25 countries, including the United States, to take action on these treaties.

Implementation of the July nuclear deal alleviates concerns about Tehran’s ability to covertly develop nuclear weapons. But the threat of nuclear terrorism will remain. Iran must do more to provide assurances that its nuclear program is both peaceful and secure. The international community should play its part by encouraging Tehran to take steps to strengthen its nuclear security and implement global norms and regulations that provide assurances on nuclear security. Unfortunately, an opportunity to press Iran to take those steps at the Nuclear Security Summit was lost.

Kelsey Davenport is Director for Nonproliferation Policy at the Arms Control Association.