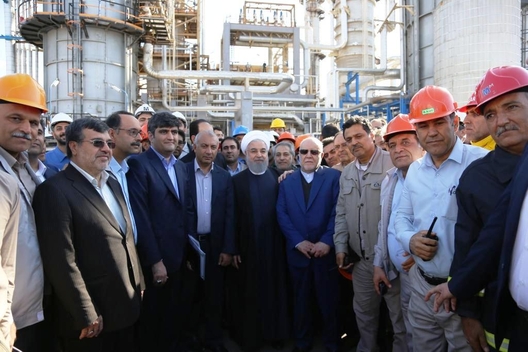 With the US aiming to bring Iran’s petroleum exports to a complete stop through imposed sanctions, and Iran’s dependence on petroleum revenues, the Iranian government will do its utmost to secure the minimum required oil exports. But, what is that minimum? In order to perhaps find an answer, one needs to understand current Iranian macroeconomics.Crude oil exports is one of the main revenue sources of the Iranian government, as well as a major contributing engine for developing the country’s infrastructure and economy. Yet, only 17 percent of the Iranian GDP in 2018 and 30 percent of the government’s fiscal budget for the Iranian year 2019-2020 depend on petroleum exports.

According to the Iranian government’s “Sixth Economic Development Plan,” dependence on petroleum export revenues shall be reduced to 20 percent by 2022 and completely eliminated by 2024. To skeptics, this seem unrealistic, considering that Iran is the world’s fourth and OPEC’s third largest crude oil reserves holder. But to those who have observed Iran’s economic development during the past two decades, it may not be such a farfetched plan after all. In 2009, the petroleum sector accounted for 60 percent of total government revenue compared to today’s 30 percent despite financial crises that have continuously hit Iran, sanctions and embargos.

The final revision of the government’s budget for the Iranian fiscal year 1398 (March 2019 – March 2020) was released on March 19. The budget is presented in Iranian Rials (IRR). There are several formal and informal IRR-USD exchange rates in Iran, so depending on which exchange rate one uses, the budget numbers in dollars vary. In this analysis, the government’s exchange rate used for its budget is $1 = IRR 57,000 IRR.

The total approved government budget for the ongoing fiscal year is $91.2 billion, out of which $78.7 billion shall be funded by non-government generated revenue sources including petroleum. The government, however, is not entitled to receive all oil and gas export revenues. A portion (20 percent) is supposed to be deposited into the National Development Fund (NDF), another portion (3 percent) must be allocated to development of underprivileged areas, and a portion (14.5 percent) shall be returned to oil and gas production facilities for development and maintenance. After these deductions, the government expects to receive $24 billion.

But, in the last revision of the budget, a new field is added to the external revenue sources table, which has escaped the eyes of many financial analysts. Additional petroleum export revenue equivalent to $1.7 billion is projected as “Crude oil delivery to real or juridical persons,” i.e. petroleum sales through private entities on the open international market. Hence, the expected petroleum export revenue to support the government’s budget becomes $25.7 billion, which—considering that the Iranian government has assumed a crude oil price of $54 per barrel—translates to a crude oil export quantity of approximately 1.5 million barrels per day (bpd).

This explains why the Iranian government insists on selling 1.5 million bpd of crude oil in order to remain committed to Joint Comprehensive Plan of Action (JCPOA) in the midst of the ongoing crisis triggered by the US decision to quit the nuclear deal unilaterally.

It is important to mention that a key priority for the government is to import food and medicine to prevent social unrest. The government has pledged to allocate $14 billion for importation of “basic products”—primarily food and medicine. This amount is planned to be secured through petroleum exports.

But, what if Iran can’t sell 1.5 million bpd of its crude oil?

The Iranian government’s budget is backed by two major funds—Iran’s foreign exchange fund and the NDF. By early 2018, Iran’s reserves in foreign exchange and gold amounted to $132 billion. At present, it is believed that the figure is $100-$103 billion. The NDF, which has had $91 billion in turnover since its inception in 2011, appears to have $20 billion available in cash. Both funds can be used if oil exports are halted and the financial crisis worsens.

In case of a budget deficit, mainly due to reduced petroleum exports, the Iranian parliament has already approved allowing the government to utilize up to $7 billion from NDF, as well as up to 50 percent of foreign exchange reserves. Thus, if worse comes to worst, the government may access $57 billion to compensate for the budget deficit, which is more than the country’s expected crude oil export revenues. Of course, repatriation of funds—especially foreign exchange reserves outside Iran—won’t come without challenges. The point here is that the Iranian government obviously has contingency plans.

Nonetheless, Iran – having rank 20 and rank 16 in the world regarding foreign exchange reserves and its development fund, respectively, is certainly not keen to utilize those funds to compensate for budget shortfalls. Therefore, the Iranian government will make tremendous efforts to export crude oil. In addition, the government will try to increase non-oil exports, optimize tax management and prevent further depreciation of rial.

In general, Iran’s economy is better prepared to deal with sanctions and a financial downfall than it was in 2012-2013, when the sanctions had willing multilateral support. The Iranian government is more coherent and better managed now under President Hassan Rouhani than it was under his predecessor, Mahmoud Ahmadinejad, and more capable of financial engineering and financial reforms.

By applying the lessons from the previous sanctions period, implementing saving plans, increasing non-oil exports, enacting financial reforms, currency controls and managing the NDF and foreign reserves, Iran can probably manage with a minimum petroleum export revenue of around $17 billion a year, equivalent to 720,000 bpd. That would allow the country to keep its head above water and the population to survive until the next US presidential election.

Mohsen Tavakol is a nonresident senior fellow with the Middle East Programs at the Atlantic Council. He is also an international business executive within telecommunications and IT industry. Follow him on Twitter: @Mohsen_Tavakol.