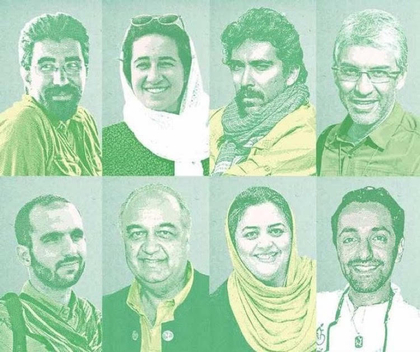 The family of Kavous Seyed Emami, a prominent environmentalist and professor at Tehran’s Imam Sadegh University, broke the horrific news on February 10 that he had died under suspicious circumstances while in detention. Iranian authorities claimed he had committed suicide.

Only a few weeks earlier, the Islamic Revolutionary Guard Corps (IRGC) intelligence arm had arrested Seyed Emami, an Iranian-Canadian citizen, and seven other environmental activists from the Persian Wildlife Heritage Foundation, a local nonprofit organization that works to conserve and protect endangered species in Iran.

Fast forward eight months, and the seven environmental activists including another activist arrested in March are still in pre-trial detention without access to a lawyer of their own choosing. Iranian authorities have not carried out a transparent investigation into Seyed Emami’s death, but instead placed his wife, Maryam—also an Iranian-Canadian citizen—under a travel ban.

As a result of climate change affecting the Middle East and the Iranian government’s mismanagement, Iran is facing a potential environmental crisis, particularly a water shortage. At a time when the country is also confronting major economic hardship after the United States re-imposed economic sanctions, government officials should be welcoming volunteer efforts to tackle these issues. Instead, the security apparatus’ long-held wariness of international cooperation and fear of independent activism have led it to crackdown on the people who were trying to help address these problems.

In February, authorities also briefly arrested the deputy head of Iran’s Department of Environment, Kaveh Madani, who had returned from the U.K. to help with the country’s water management problems. He decided not to return from a trip abroad after authorities threatened him with arrest again.

Tehran prosecutor Abbas Jafaridolatabadi told reporters that the detained activists are accused of using environmental projects as a cover to collect classified strategic information, providing no evidence for the allegation. It’s not clear how an environmental conservation group can get access to classified information. Several Iranian officials, including Issa Kalantari, the head of the Department of Environment, have said that the Rouhani administration’s investigation did not find any evidence that they are spies. No lawyer or family member has been told about the exact charges against the activists or has reviewed their cases.

Nine months of pre-trial detention with no clear charges and no access to a lawyer is an unusually long time even by Iran’s dismal due process standards. It’s hard not to conclude that the authorities are struggling to gather enough evidence to charge them with any recognizable crime. The disagreement between the Rouhani administration on one side, and the judiciary and the IRGC on the other, only adds to the suspicion that these activists’ rights are being further tampered with as a consequence of a domestic power struggle.

The Wildlife Heritage Foundation was a well-regarded group that extensively cooperated with government entities and international organizations such as the United Nations. It had been successful in raising public awareness about endangered Asiatic Cheetah by helping to place its image on the Iranian national team’s 2014 World Cup jerseys. The group’s reach and extensive contacts in the conservation community might be the very reasons its members were targeted.

After the nuclear negotiations with five members of the UN Security Council plus Germany that resulted in the Joint Comprehensive Plan of Action, Supreme Leader Ayatollah Ali Khamenei and other leading government figures expressed concerns about Western intentions to influence Iranian politics. In October 2015, Khamenei explicitly advised against negotiating further with the US, as it could open doors for “cultural, economic, political, and security infiltration.” The phrase “infiltration” became the watchword for Iranian intelligence agencies in defining domestic enemies they claimed were national security “threats.” Since then, dozens of dual and foreign nationals as well as Iranian citizens have been arrested, accused of being part of the Western “infiltration” network.

Kayhan newspaper—seen as close to the intelligence apparatus—has been promoting this narrative, publishing numerous articles on the West’s supposed infiltration attempts, including on start-up and environmental activities. These articles have mentioned several people by name, including Morad Tahbaz, one of the detained environmentalists—a dual national—accusing them without proof of cooperating with the West.

Since the environmentalists’ arrests, state television and other media seen close to the intelligence apparatus have run similar smear campaigns against them without a shred of evidence of their guilt.

Meanwhile, as Kalantari has noted, their repression has had a chilling effect on all environmental groups in the country, whose members wonder if environmental activism is now a crime.

The continued detention of the environmental activists is a serious violation of their due process rights. It’s also an attack on nongovernmental groups that are trying to help Iran tackle major problems that will have long-lasting consequences for millions of Iranians.