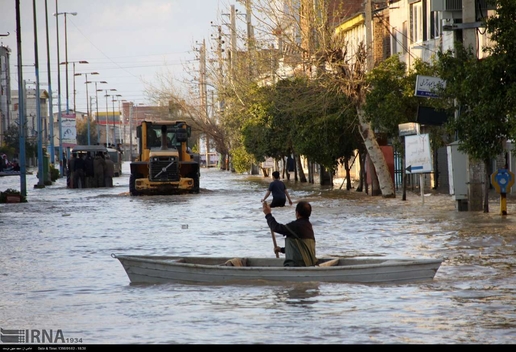 Iranian authorities barred international journalists from covering the disastrous floods that have stricken most of the country’s provinces and caused death and mayhem during the normally festive two-week Nowruz holidays that follow the Iranian new year. Not even the smattering of foreign journalists still huddled precariously in Tehran were granted permission to head to Golestan and Mazandaran provinces or even Shiraz to speak with victims, rescue workers, and good Samaritans—something reporters do during natural disasters all over the world, including recent floods in Nebraska and Mozambique.

So tightly and firmly do Iranian authorities want to maintain control over the messaging over the flood that, with the exception of reporters from state television and the official state news agency, even Iranian journalists were kept away for President Hassan Rouhani’s visit to the disaster scenes in the southern province of Khuzestan. This came after angry protesters confronted Rouhani during his visit to flood zones in Golestan. “I have three children,” one woman cried to him. “Attend to our suffering!”

To find out what’s happening in Iran in the wake of the floods, the world is forced to piece together a narrative based on amateur video trickling out of the country on social media and messaging apps.

And what a story the videos tell.

Horrific images include Iranians clinging for dear life on traffic posts as floods wash away others away, entire towns inundated with muddy water, Iranian motorists stuck inside their cars as unceasing waters carried them off. In all at least 44 people were killed in the nationwide floods. Hundreds of millions of dollars worth of transportation infrastructure has been destroyed, including 314 bridges, according to local press.

But the videos also showed scenes of heroism and solidarity. A man in Fars province struggles to save a woman and child being swept away by floodwaters. Villagers in Kermanshah province work together to save farm animals from drowning.

Meanwhile authorities looked pathetic. In an ostensible attempt to prevent fraud, but also to ban heroes from emerging outside the elite circle of power, the judiciary banned celebrities from raising funds for the flood victims, instead demanding that all donations go to the government or official charities.

Mostly bigwigs showed up at the flood zone for infuriating photo ops, in what will likely be remembered throughout Iran as the country’s Hurricane Katrina moment, when the administration of George W. Bush so badly bungled its response to the 2005 Louisiana hurricane that it defined the rest of his presidency.

In one scene in Iran, a bigtime Islamic Revolutionary Guard Corps (IRGC) officer meekly dips his hand into the floodwater, as if by his very gesture he could reverse the tide.

Clearly the regime was caught unaware and unprepared for the disaster in part because of the Nowruz holidays. The governor of Golestan province, now fired, was apparently abroad somewhere. Rouhani himself was resting on Qeshm Island in the Persian Gulf.

But holidays didn’t stop ever-vigilante IRGC thugs from stopping and arresting Nazanin Zaghari-Ratcliffe from departing unhindered from Tehran as she visited her family during Nowruz holidays in April 2016. If they were so tightly prepared that they could identify a young mother traveling with her 22-month-old daughter as a threat to national security, they could surely have foreseen heavy storms meteorologists had been warning of for days, and gathered bags of sand and mobilized officials ahead of the deluge. That’s especially true since places like the north of Iran regularly suffer from flooding.

The regime claims to have maximum control over all aspects of life in Iran. Though that sounds totalitarian to non-Iranians, the promise of security and stability appeals to many inside the country collectively traumatized by the the chaotic disasters that befell Iran in the twentieth century.

But the floods showed what a paper tiger the regime is. People are largely left to fend for themselves as ineffectual hardline regime stalwarts bark orders or stage photo ops.

Like the military-dominated regimes in Egypt and Algeria, Iran under the sway of the IRGC is weak and incompetent. It’s also brittle. State television on March 29 cut off a live broadcast of a crisis management meeting chaired by Rouhani after one official complained about a lack of opportunity for participants to express their concerns about the floods.

A defensive Rouhani said it was “impossible” to prevent floods, pointing to the 2011 tsunami in Japan and even the recent floods in Nebraska as examples.

But Iranians are outraged. Even if unpreventable, how could a regime that spends so many resources on controversial troop deployments and missile advancements claim not to be able to mitigate the damage. One Iranian man posted a video of himself directly addressing Supreme Leader Ali Khamenei and the leaders of the IRGC.

“You gave so much for Syria, what did you get out of it?” he says. “People are being destroyed by this flooding. Our own children are drowning. You who didn’t want Israel to exist in twenty years, with this situation, our country won’t see another year.”

There’s only one way for Iran to take advantage of the floods, and that is if the Trump administration begins mouthing off about the issue. That will give the regime the ability to cast the many critical of its performance as stooges of the west.

US policymakers should understand that Iran’s inability to respond to the floods in the most basic way, and it’s unwillingness to listen to the environmental scientists who have for years warned of Iran’s impending water management crises, is a far bigger condemnation of the regime than any tweet by National Security Advisor John Bolton or State Department press release.

Image: A man paddles through the flood waters in Gorgan, Golestan province (IRNA)