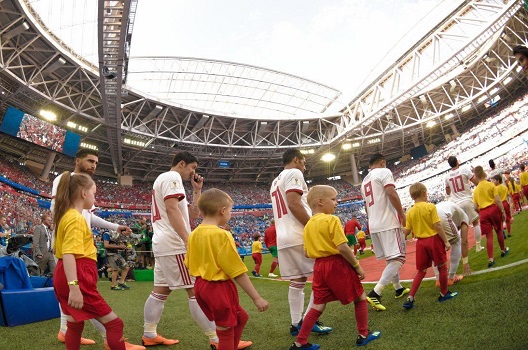 Iran's squad against Morocco in St. Petersburg at the 2018 World Cup (Mahdi Zare via Wikimedia Commons)

The one thing, besides Nowruz, that unites Iranians across the globe is Team Melli, the national soccer team. If social media is any indication, Team Melli is an obsession for Iranians everywhere.

Iran qualified for this summer’s World Cup on June 17, 2017, the first time the country has punched its ticket for two consecutive tournaments. There was a sense, by the end of the qualifying campaign, that Iran had become strong enough to make it into the round of 16, also for the first time. Although these hopes ultimately were not realized, Team Melli performed much better than expected when paired in the first round against traditional powerhouses Spain and Portugal as well as a strong side from Morocco.

In preparation for the World Cup, Iran’s Portuguese manager, Carlos Quieroz, brought the players together for a series of friendly matches in March and then again in the weeks leading up to the tournament. He used these camps to finalize his 23-man roster.

These early performances stirred quite a bit of controversy, however. If anything, the team looked a shadow of itself. They were disorganized, aloof, and uninspired.

To be fair, they also had trouble securing quality competition. In one instance, against Sierra Leone, there was speculation that Iran’s opponents purposely sent younger, inexperienced players. The Sierra Leone football association went so far as to claim that it was unaware of the match.

At the end of May, in a surprising twist on the brink of the World Cup, Nike announced that it would no longer honor shoe contracts with several Iranian players. The sports gear company claimed that those contracts violated US sanctions law, which had not yet come back into effect but was slated to do so following the Trump administration’s unilateral withdrawal from the Iran nuclear deal on May 8.

Undaunted by the Nike decision – and sporting soccer shoes in a variety of colors including hot pink and orange — the Iranian Cheetahs kicked off their campaign June 15 in a must-win game against Morocco. Spain and Portugal would be tough to beat, but if Iran could earn three points by winning the first match, its chances of surviving the first round would improve dramatically. The Iranians would have to do so, however, without the services of their star defensive midfielder Saeid Ezatolahi, who was suspended for the initial contest.

Queiroz’s side spent most of the game on the back foot, slightly disorganized in defense and anemic on counterattack. When Team Melli was able to get forward, its raids into the Moroccan defensive third petered out relatively quickly.

But deep in second half stoppage time, Iran got what it needed. After Morocco conceded a free kick close to the left corner, Ehsan Haji Safi’s subsequent cross was deflected by Moroccan striker Aziz Bouhaddouz into his own net.

Iranian fans could breathe a sigh of relief. Their team walked out with a 1-0 victory.

The next adversary, Spain, is known for its tiki-taka style of play, which can best be described as “death by a thousand passes.” Iran had to be comfortable without the ball requiring discipline in the defensive third, while seeking to spring counterattacks in only a few cases. Team Melli would need its absolute best effort.

Having Ezatolahi back made a huge difference as Iran was far more organized and actually looked dangerous when attacking Spain’s goal. La Furia Roja was reduced to just a handful of half-chances. Unfortunately, despite eliminating nearly every Spanish opportunity and having a goal disallowed, Iran lost 1-0. Diego Costa deflected an attempted clearance into Iran’s goal in the 54th minute.

But Iran fans, and many neutral observers, walked away feeling inspired, even confident. Proud of the defensive effort and never say die attitude, hopes were high for the last group game against Portugal on June 25.

Portugal was Iran’s last Group B rival. One name is all you need to know about the reigning European champion—Cristiano Ronaldo. He’s arguably the best player in the game today and possibly one of the all-time greats. His sublime performance against Spain in their first game left no doubt just how dangerous he is.

Much like in the game against Spain, Iran was able to close down the space and deny Portugal opportunities to score. But it was Ricardo Quaresma and Adrien Silva who finally broke down Iran’s defense in the 45th minute with a clever exchange. Silva’s return pass to Quaresma allowed him to skip past his defender and pick out the top corner with a signature curling shot using the outside of his right foot. Portugal went into the half 1-0.

After the match referee, with the assistance of the video assistant referee (VAR), awarded Portugal a penalty kick, things looked like they would get worse for Team Melli. But Iran’s tenacious goalkeeper, Alireza Beiravand, stepped up and saved Ronaldo’s spot kick. Beiravand is famous for having run away from home at an early age to pursue his soccer career. He often had to sleep on the streets before making it as a professional.

Iran continued pressing for opportunities and also benefitted from the VAR system. A handball in the box by a Portuguese defender was missed by the match official. Once he reviewed the game footage, he signaled for an Iranian penalty kick. Karim Ansarifard stepped up and buried his shot in the back of the net, tying the game at 1-1.

Almost immediately after, Iran was back on the attack. Sardar Azmoun got his head onto a long ball from substitute Milad Mohammadi. Azmoun flicked it on to Saman Ghoddos, who took a touch but had his shot blocked right into the path of Mehdi Taremi. Unfortunately, Taremi sent his shot into the side netting.

With only a few minutes left, neither side was able to break the deadlock. A tie and an unfavorable result from the Spain-Morocco match meant Iran would be headed home.

Iranian fans still exuded pride at their more than respectable showing. An added bonus came when Iranian female fans were allowed on the grounds of Tehran’s Azadi stadium to watch the Iran-Spain match. Famed Iranian filmmaker Jafar Panahi’s 2006 film, “Offside,” brought attention to the plight of female sports fans in Iran. Since the 1979 Islamic Revolution, women have been banned from attending sporting events alongside men. The regime has claimed it wants to “protect” females from harassment and the unruly behavior of males during games. But critics suggest that’s just another ploy to institutionalize the ruling elite’s misogyny.

Thus, the government’s decision to open up Azadi stadium, the main site for most of Iran’s home matches, for watch parties was a positive step that won favor with Iranians and sports fan across the globe.

On June 25, anti-government protests broke out in Tehran over the collapse of the national currency, the rial, against the dollar – one consequence of the US decision to quit the Iran nuclear deal and reimpose sanctions on Iran.

But for the last ten days, Team Melli’s run has helped Iranians forget about the Trump administration’s decision – and let foreigners see Iran in a different light.  Derek Rae, the on-air game commentator for American broadcaster Fox, put it best when he described his experience covering Team Melli: “It’s been a real joy to cover Iran at this World Cup.”

David Shams is a writer and keen soccer commentator. You can find his works at bourbonandchai.com and dcsoccerdigest.com.