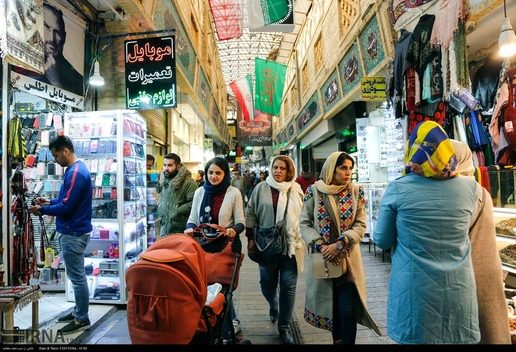 The Iranian economy and population are every day feeling the painful effects of US-driven financial pressure aimed at blocking any kind of economic interaction between foreign and Iranian banks and businesses.

The sanctions’ political aim is to make it harder for the Iranian government to govern and reach its political, military and economic ambitions. But in reality, the sanctions do more harm to the already struggling private sector, which employs a large part of the Iranian workforce, and consequently to average Iranians.

With a population of more than 82 million, Iran ranks eighteen among the world’s economies. Providing products and services to meet the consumption needs of such a big population demands a sophisticated business infrastructure. Iran has an ancient history of trade and free markets in which the private sector plays a vital role.

Yet the private sector in Iran has been struggling since the 1979 revolution given an increasingly mismanaged government, poor public administration and judiciary system, and regulatory bodies that often impede normal economic activity. Dealing with these obstacles is a costly affair and the situation only gets harder when sanctions hit.

Despite what many outsiders may believe, Iran has never been isolated from the global economy. That is why sanctions and embargos have made the struggle even harder for the private sector. A significant portion of Iranian private companies are—in one or another way—dependent on foreign trade. They need, for example, to import raw material for pharmaceuticals, software modules for high-tech industries, and spare parts for previously imported foreign products. On the export side, Iran provides food products, ceramics and construction materials, as well as oil and petrochemicals.

Severed access to international financial systems hits private companies in Iran hardest since they can neither pay nor receive payments from abroad.

Further, denied access to international shipping and courier services prevents both Iranian and foreign parties from delivering goods and services according to commercial agreements.

The disruptions not only make continued business with foreign counterparts very cumbersome if not impossible but also cause legal, commercial and financial problems that often are not covered by force majeure clauses in commercial contracts or covered by insurance. Thus the parties may be dragged into legal and commercial battles that can take years to resolve.

In spite of the risks and other difficulties, many Iranian companies are willing to continue international business engagements by using alternative trade and financial channels such as front companies and exchange offices. This increases the business costs for Iranian companies by as much as 40 percent as well as the exposure risks for both Iranian and foreign partners in terms of fines, blacklisting or legal prosecution by the US or other authorities.

The devaluation of Iran’s currency, the rial—as a result of US withdrawal from the Joint Comprehensive Plan of Action a year ago—has put further pressure on private companies, especially those that need foreign goods and services. The companies desperately need to sell more goods and services in local currency to afford foreign exchange. This becomes even harder because rising inflation in Iran, despite interventions by Iran’s central bank to support the rial, is significantly reducing Iranian consumers’ purchasing power.

The private sector hence needs to maintain a very difficult balance: securing enough local revenues and on the other side, euros and dollars for foreign trade.

The financial sanctions make it harder for the CBI to allocate hard currency to Iranian companies. The government has defined and dictated a currency allocation priority list to the CBI and since the amount of hard currency is limited, private companies have to lobby the CBI and local banks to secure required allocations. The lobbying in turn imposes additional business costs.

The challenges for the private sector in trying to maintain international trade do not end there.

During the past couple of months, the CBI has not been able to allocate euros to many Iranian private companies. Instead, it has allocated Chinese renminbi, collected in China in return for Iranian oil sales. The problem is that the companies cannot easily convert the Chinese currency to euros to conduct business with Europeans and others. The allocated renminbi is supposed to be spent in China; transferring the money to Europe through informal channels imposes yet more costs—up to 20 percent of the transferred amount.

The accumulated costs of business for the private sector have thus become unbearable. The situation feels hopeless. One could say that the Iranian private sector—humiliated, broken and abused—has been taken hostage both by domestic challenges and by US-led imposed sanctions. The private sector is on the verge of breaking under such grievous pressure, but it has to survive to serve millions of people in Iran.

Private companies that cannot cope are driven into bankruptcy, meaning employees lose jobs and the market misses vital products and services. Every day, a number of private companies in Iran are forced out of business in this way.

Considering that Iranian petroleum export revenue accounts for less than 40 percent of Iran’s GDP, the private sector has had a major positive impact on the nation’s economy. Sanctions are failing to change the political choices of the government while directly impacting the well-being of the Iranian people.