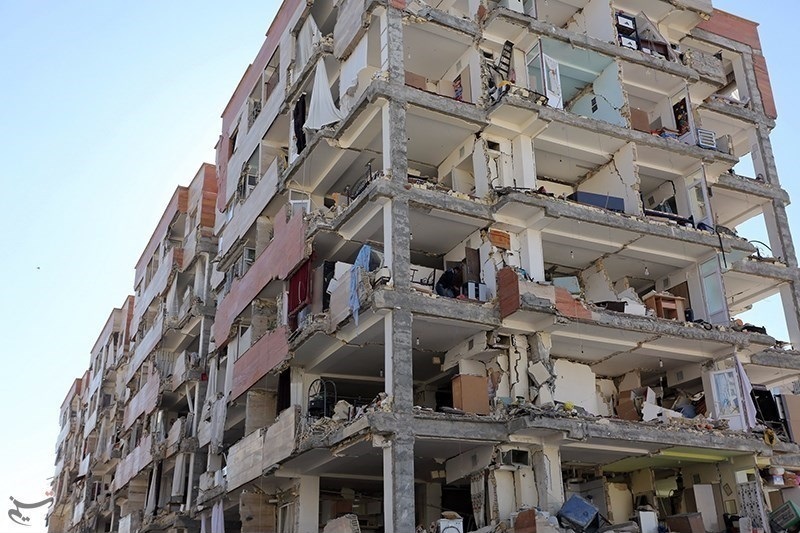 The evening of November 12th, 2017 was tragic for the people of the Western province of Kermanshah, which has a Kurdish population famous for its warm hospitality. A powerful earthquake of 7.3 magnitude shook the province, destroying thousands of homes, killing at least 500 people and injuring nearly 10,000 more. The Iranian governmentsays the quake also caused some $6.3 billion in damage.

Ahmad Safari, Kermanshah representative in the Iranian Parliament, said that the number of dead and injured, as well as the scope of damage, is much higher than has been reported. Safari criticized the IRIB (state radio-TV) for its coverage and the Red Crescent for a weak response and added that Kermanshah lacks proper crisis management.

Kermanshah province is close to the Iraq border. It is the same naturally beautiful area invaded by Iraq 37 years ago, enduring the tragedies of an eight year-long war that claimed countless lives and caused widespread devastation and destruction.

Iran is no stranger to earthquakes, which have been a frequent occurrence across the country over the past decades. The multitude of lives lost, homes ruined, schools and hospitals destroyed, however, is not solely caused by the fact that buildings are constructed on fault lines. It is more rooted in the fact that engineering principles ensuring safety in the case of earthquakes are not always closely, if at all, followed at the time of construction.

This was sadly evident in the aftermath of the Kermanshah quake. Apartment buildings built ten years ago during the presidency of Mahmoud Ahmadinejad as part of state-sponsored housing, known as Maskan-e Mehr, or Mehr Housing, were destroyed. Details of sloppy construction and systematic negligence are gradually resurfacing. President Hassan Rouhani mentioned the matter on the heels of his visit to the areas hit by the earthquake. Rouhani said he had observed privately built homes that remained intact, while government built buildings have collapsed, “which is a sign of corruption in the construction process.”

However, Rouhani-era construction has also received a failing grade. In Eslam-Abad-e Gharb, one of the areas most harshly hit by the earthquake, a newly built hospital was severely damaged, although it was supposed to have been built to earthquake code and was opened only eight months ago. The damaged hospital is believed to have been poorly constructed, and some attribute the hasty completion of the project to the presidential election and Rouhani’s attempts to attract votes.

Rouhani’s visit to the quake-stricken area was widely covered in the media. The president was criticized because he failed to exit his vehicle and meet with the people, choosing instead to simply stick his head out of the car’s sunroof. Some wrote that Rouhani may have stayed in the car for fear of local Kurdish militant groups. Others suggested that he may have been cautioned against getting out of the car because people were frustrated and angry at the inadequate government response to the earthquake. Interestingly, despite being lambasted for the Mehr housing project, Ahmadinejad also visited Kermanshah.

The Iranian Army has reportedly been active in helping quake survivors, earning thanks from the public. There has been some criticism, however, of the Iranian Revolutionary Guard Corps, a parallel force to the regular army, for purported shortcomings in delivering aid and helping the survivors.

Ordinary Iranians throughout the country have sent an abundance of aid, in some cases gathered by celebrities or other trusted figures through social media. However, Iranian Americans have struggled to transfer funds to Iran for earthquake relief because of US sanctions. A Facebook page set up to help the quake victims reportedly collected $200,000 from Iranian-Americans, but was taken down by Facebook for the same reason. It was later announced, however, that money could be transferred via a few NGOs in the US.

Several countries, including Israel, offered help directly or through the Red Cross, though Iran was reportedly not informed of the Israeli offer. The Trump administration made no such gesture.

Iranians are sending money and goods and donating blood, as they have done in the wake of previous such tragedies. The personnel of several public and private sector organizations  each dedicated a day’s salary to the people affected by the earthquake. A major problem, however, is the chaotic status of aid distribution in Sar Pol-e Zahab and its surrounding rural areas, which have been hit the hardest by the earthquake.

Over a week after the disaster, many in the area are still suffering from a lack of clean water, showers, tents and blankets and the health and sanitary conditions in the area are described as very poor. There are still children whose families have not been located, and a shortage of medical care. Temperatures at night fall below freezing.

Some journalists have published videos of the quake-stricken area that they shot themselves or obtained from earthquake survivors. While grateful for the public’s assistance, the Kurdish population of Kermanshah is angry at the government. In one video, an elderly man in Kurdish clothing complains that “the government has helped everyone: Bosnia-Herzegovina, Lebanon, Syria, Iraq … but not us.”

Unfortunately, such scenes have become all too familiar. Large areas of the country are earthquake-prone but suffer from insufficient attention and care in the construction of buildings. When earthquakes occur, the death tolls are high and government response is inadequent, deepening public mistrust. Ordinary people respond but in the absence of good coordination and management, the suffering of many survivors is more acute than it would otherwise be.

Mehrnaz Samimi is a linguist, simultaneous interpreter, and an editor with the International Center For Journalists.