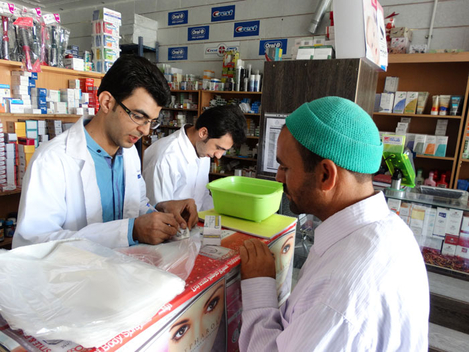 The re-imposition of US sanctions since President Donald Trump abandoned the Joint Comprehensive Plan of Action (JCPOA) in May 2018 has had a devastating effect on the Iranian economy and has especially impacted the lives of those who struggle to provide medicine for themselves and their families.

Medicine is supposed to be exempt from the sanctions. Yet Europeans companies and banks have refused to participate in financial transactions involving pharmaceuticals out of fear of US secondary sanctions.

Iran has frequently complained that this is a deviation from international law and human rights because it targets ordinary people. A recent case study pointed out that sanctions have also negatively impacted the production of drugs within Iran because the active ingredients of most medicine manufactured in Iran are imported.

Many people complain that the price of medicine has increased significantly in three phases since last year and that many live-saving drugs have become scarce in the market.

Ensieh, a retired teacher who is in her late 60s and has diabetes and high blood pressure, told this author that while her physician has prescribed Norvasc, a long-acting calcium channel blocker used to treat high blood pressure and angina, she has not been able to find the medicine despite contacting numerous drug stores.

Hossein, a university professor, said he had been purchasing a certain medicine for his wife for the past few years, but the price has now increased fourfold. While Hossein said he could afford it, he doubted working class Iranians could manage.

The manager said other medicines had disappeared entirely, including Zilomele eyes drops and Citalopram, an antidepressant.

The manager at another drugstore in the Majidieh neighborhood of Tehran said that even medicine manufactured in Iran had increased in price by 50 – 60 percent. The pharmacist at this drugstore said a pack of Levothyroxine, which treats enlarged thyroids and is made in Iran, has increased from 15,000 rials ($1.12) to 75,000 rials ($5.61); Acetaminophen from 7,000 rials (52 cents) to 20,000 rials ($1.49) and Ranitidine, which treats indigestion and stomach acid, from 8,000 rials (59 cents)  to 13,000 rials (97 cents). Some other drugs that are normally purchased regularly by patients are now hardly available, she said, among them Valsartan, Dimethicone, Methimazole and Fluoxtine.

US Secretary of State Mike Pompeo has denied that sanctions have impacted Iranian access to medicine and food. He tweeted in November 2018: “The truth is: the US does not, and never did, sanction food and medicine. They are exempt from sanctions, as are financial transactions related to humanitarian needs.”

But the Trump administration is now threatening to sanction INSTEX, a mechanism set up by Europe and Iran to facilitate humanitarian trade because no European banks would risk US sanctions and loss of the American market. On May 31, Pompeo claimed that the United States does not have a problem with INSTEX as long as “it’s aimed at facilitating the movement of goods that are authorized to move.” However, in a meeting on June 2 with the Swiss Foreign Minister Ignazio Cassis, Pompeo was told that the Trump administration must allow bank transfers to Tehran in order for Switzerland to provide humanitarian goods.

Iranian officials have harshly criticized the US for hypocrisy in claiming that it has exempted medicine and food from sanctions. Alireza Marandi, the president of Iran’s Academy of Medical Sciences, said the United States has endangered the lives of many Iranian patients by imposing “unjust” food and medicine sanctions against Tehran. He further called on the UN to act against what he called the “incessant violation of human rights” by the Trump administration.

Dr. Mohammad Hassan Bani Asad, the managing director of the Gandhi Hotel Hospital, told CNN in February: “Sanctions is the first problem in our country and in our system. We can’t transfer the money and make the preparations for surgery. It’s a big problem for us… We have the procedures, but we don’t have the instruments. It’s very difficult for patients and maybe leads to death of some patients.”

Many Iranians have sought to adapt to this horrible situation by resorting to the black market or asking a relative or a friend to provide supplies from abroad.

A woman told this author that she has asked friends traveling from foreign countries to bring medicine for her husband and that this is a constant source of anxiety.

Tahereh Hadian-Jazy is a free-lance writer in Iran. She holds a masters degree in modern Middle Eastern studies from Oxford University and has been accepted for a PhD at the University of St. Andrews.

Image: A doctor fills the prescription of a patient ( esfahanshargh.ir)