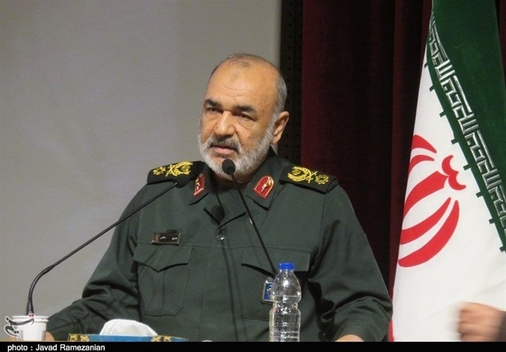 Supreme Leader Ayatollah Ali Khamenei had extended the tenure of the former IRGC top commander, General Mohammad Ali Jafari, by another three years in 2017 after he had served for a decade. The decision to replace him with Salami was unexpected and premature.

A day earlier, the IRGC head of security General Ali Nasiri was also sacked and replaced—only after serving a year and half in his post. Nasiri was in charge of the “protection” division of the IRGC which oversees security for key Iranian officials, critical centers and organizations, as well as airports across the country.

Then on April 19, the Ministry of Intelligence claimed to have identified 290 Central Intelligence Agency (CIA) spies in various countries over the past year, some of whom had managed to infiltrate “critical centers” inside Iran. Referring to a Yahoo News story about how a CIA covert communications system was compromised in Iran, Minister of Intelligence Mahmoud Alavi highlighted the ministry’s “shift of method from defensive to offensive.”

These series of events are hardly coincidental.

Given Salami’s more hardline approach and bellicose rhetoric compared to his predecessor, the IRGC change of command seems to be the latest effort by the Islamic Republic to adapt to the emerging threat environment and move towards a more offensive posture.

The decision came about two weeks after the US designation of the IRGC as a Foreign Terrorist Organization (FTO) and shortly before the Trump administration’s decision to halt sanctions waivers for buyers of Iranian oil. To further tighten the screws on Iran and its regional activities, Washington simultaneously offered a reward of up to $10 million for intelligence that could help disrupt the financial networks and dealings of Lebanese Hezbollah, Iran’s linchpin proxy in the Middle East.

Under these menacing circumstances, Salami’s new position points to a potential strategy shift, where one scenario might be for the Revolutionary Guards to focus more on security and military affairs—at home and abroad—and less on economy.

One of the key differences between Salami and his predecessor is that his training is more fit for military leadership and defense-offense strategization.

A veteran member who joined the IRGC shortly after the outbreak of Iran-Iraq War, Salami has since dedicated his professional life to studying defense management and building the corps’ military doctrinal base. He also chaired the staff college of the IRGC during 1992 – 1997 and devised its famous “high war course.”

Salami is also known for his controversial statements about Iran’s position in the world and against enemies of the state, particularly Israel and the United States.

“We should expand our realm of authority from the region to the [whole] world so that there is no safe spot for the enemy around the globe,” Salami stressed during his inauguration address, despite mounting international pressure on Tehran to alter its “destabilizing” behavior and become a “normal” country. On more than one occasion, Salami has “welcomed war with the United States,” even suggesting it in the lead up to the 2015 nuclear agreement.

More recently, following Israel’s intensified airstrikes against Iranian positions in Syria, Salami warned in late January that “our strategy is to eliminate Israel from the political geography of the world” and that if a military conflict breaks out, “Israelis will not even find a graveyard in Palestine to bury their corpses.”

Salami also threatened Europe in February over pressures on Iran to contain its ballistic missile program, emphasizing that Tehran will have to boost its missiles’ range beyond the current limits if Europeans push for “missile disarmament.” Tehran’s missile capability is “unstoppable and uncontainable,” he added.

While Jafari focused on upgrading the organizational structure of the IRGC—including the establishment in 2008 of separate corps for each province—Salami remained preoccupied with external threats and formulating a military doctrine of irregular and asymmetric warfare to compensate for Iran’s weak and outdated air force. Leaving behind an extensive decentralization project during his term as the IRGC’s top commander, Jafari was ultimately put in charge of the Baghiatallah Cultural and Social Base, an entity tasked with countering cultural and ideological threats to Tehran.

“Considering the damage done to the IRGC’s image as a consequence of foreign designations and domestic corruption scandals, this reshuffle means the Revolutionary Guards will seek to play a more active role in the so-called hearts and minds campaign to preserve its supporter base and grassroots backup in the society,” explained Saeid Golkar, a senior fellow for Iran policy at the Chicago Council on Global Affairs.

Yet, perhaps the most complicated issue will be the economy and the IRGC’s heavy involvement in it.

The rationale is that the FTO designation will persuade the IRGC top ranks to reduce their role in economic affairs. From an international business perspective, any connection with an economic enterprise will likely scare off foreign partners and investors.

“From now on, the Revolutionary Guards will contaminate any area of Iranian economy it puts its hands on, so this might deter them from expanded economic activity, but the question is, does the Islamic Republic always act rationally?” Golkar emphasized.

Even if the Iranian leadership wants to “act rationally” now to the IRGC’s economic involvement, an entrenched pattern of dependency on this kind of role and other structural factors will likely stymie that course of action.

First, due to its unrivalled military-political power and exclusive rentier position, the IRGC has invariably been the main force behind busting and evading international sanctions. This has not only maximized its chances of amassing economic clout—accounting for between 20 to 40 percent of Iran’s economy—but also enabled the group to feed its supporter base and fund initiatives that keep them economically content and ideologically convinced. Undoing this, even gradually, will not be easy now that Tehran has been subjected to crippling US sanctions once again. In other words, who will bust these sanctions if the Revolutionary Guards decide to retire from the economic sphere?

There might also be obstacles to the redefinition of the IRGC’s role at the personal level.

“Salami himself has been thickly involved in some lucrative schemes, particularly when Rostam Ghasemi was serving as head of the Khatam al-Anbia Construction Headquarters from 2007 to 2011,” a Tehran-based observer with close ties to the IRGC told this author on condition of anonymity. A key link between the Revolutionary Guards and the government of former President Mahmoud Ahmadinejad, Ghasemi went on to become minister of petroleum from 2011 to 2013.

While the IRGC’s approach to economy under its new leadership and in the emerging circumstances remains unclear, the appointment of Salami indicates Tehran’s gradual shift to a more offensive posture abroad and further securitization in the society. This shift is historically consistent with the Islamic Republic’s pattern of behavior as a nondemocratic state when it comes under severe foreign pressure. In other words, instead of unclenching its fist—as former US President Barack Obama once urged Tehran to do—it is likely to tighten it further.

Maysam Behravesh is a senior political analyst at Persis Media and a PhD candidate in the Department of Political Science at Lund University, Sweden. Follow him on Twitter: @behmash.