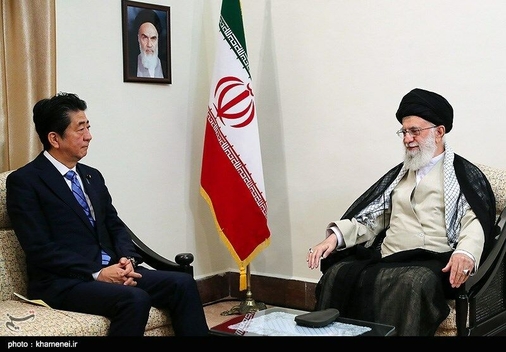 Iran shot down a US military drone near the Persian Gulf, increasing fears of an armed conflict between Tehran and Washington. Against this backdrop, the path to talks between the two governments appears blocked.President Donald Trump’s “maximum pressure” campaign ostensibly aims to force Iran to come to the negotiating table and strike a new deal, including bigger and more long-lasting restrictions on its nuclear and missile programs and an end to support for proxy groups. Iran’s supreme leader, Ayatollah Ali Khamenei, has so far vehemently opposed new direct talks with the Americans.

During his June 13 meeting with Japanese Prime Minister Shinzo Abe, who said he conveyed a message from Trump, Khamenei categorically rejected negotiations, saying, “The Islamic Republic of Iran has no trust in America and will never repeat the bitter experience of previous negotiations with America in the framework of Barjam,” using the Persian acronym for the nuclear deal. “No wise and proud nation will accept negotiations under pressure,” Khamenei added. Pointing out to Abe’s remarks that the US is ready to hold genuine talks with Iran, Khamenei said, “We do not believe that at all. Because genuine talks would not come from someone like Trump.”

Before explaining the flaws and contradictions in these statements, it is imperative to note that Trump’s unilateral withdrawal from the 2015 Iran nuclear deal not only ruined America’s credibility, even in the eyes of its closest allies, but made the world less safe and risks the US and Iran entangling in a potentially disastrous war that could engulf the whole region.

However, contrary to what he tried to portray during his meeting with Abe, Khamenei’s “no-talks, no-détente” policy toward the US is not just a reaction to Trump’s campaign against Iran. This has essentially been Khamenei’s strategy since he assumed power thirty years ago. He nullified the efforts of three moderate/reformist presidents, Akbar Hashemi Rafsanjani, Mohammad Khatami, and Hassan Rouhani, who believed in détente and tried to improve US-Iran relations.

A glaring example was Khamenei’s move immediately after the culmination of the 2015 nuclear accord with six world powers, which was the outcome of compromise and cooperation between Iran and the US. The realization of the deal after twelve years of diplomacy and brinkmanship emerged as a historic moment providing the two systems with the opportunity to break the deadlock of a “no-talks, no-détente” relationship. Khamenei, who during the talks suggested that they could be the basis for resolving other disputes if successful, banned any further negotiations with the US, saying, “Negotiations with the United States [aimed at improving relations] open gates to their economic, cultural, political, and security influence… Through negotiations, Americans seek to influence Iran.”

Why do Iranian conservatives relentlessly hold Americans at a distance? Khamenei and his followers are in fact fighting for their identity and existence. What scares them most is a so-called “soft war”—reconciliation with the US that would lead to infiltration and expansion of American pop culture. The influence of conservatives, including the clergy, would further erode and so would the system that has ruled the country since 1979.

Khamenei told Abe “no wise and proud nation will accept negotiations under pressure.” That could be applicable to some nations but definitely not to Iran. In 2013, under immense pressure imposed by American sanctions, Khamenei altered his decades-long stance of “no talks with the Great Satan” by introducing the concept of “heroic flexibility” in diplomacy. Iran entered major and lengthy multilateral and bilateral talks which led to the Joint Comprehensive Plan of Action (JCPOA).

One of the reasons Khamenei puts forward for rejecting talks with the US aimed at détente is that “the Islamic Republic of Iran has no trust in America.” This vision is flawed on two accounts. First, it is a clear indication of unfamiliarity with international relations, because distrust between states is not uncommon. The competition for superiority in weapons—the so-called the arms race—and in military, intelligence and spying organizations, exists because of mistrust. (As evidenced by numerous cases, even close allies do not trust each other: Israelis spy on Americans, Americans spy on Israelis, Germany helps Americans spy on its neighboring European countries, while its own chancellor’s mobile phone has been tapped by Americans.)

Second, it is nonsensical to set trusting your adversaries as a pre-condition to entering negotiations with them. If distrust were an obstacle to entering talks, no talks would have ever happened between adversaries.

Khamenei and the deep state continually argue that the US-Iran conflict is “fundamental, ideological, existential and cannot be resolved through negotiations.” What is the remedy to end this situation? The answer, Iranian hardliners say, is “resistance.” But one question never addressed by Khamenei is “resistance until what and when?”

The reality is that, for the last sixty years, US foreign policy in the Middle East has been heavily influenced by two elements: the Israeli factor and energy resources. The security of America’s oil supply has been an element in national strategic thinking at least since Franklin Roosevelt. The Iranian government has threatened both the security of oil and Israel.

Some may argue that US dependence on the Persian Gulf’s oil is now only a fraction of its domestic demand; therefore oil no longer drives American grand strategy. However, any instability in oil supplies from the region affects global oil prices and thus the economy of the US. Second, the rest of the capitalist world—namely Europe, Japan and South Korea—still depend on Middle East oil. To put this into perspective, a study showed that Iraq war expenses could grow to more than $6 trillion including care for its veterans. It would have been ideal if the US were not in the region and Iran not challenge Washington’s interests. However, considering the cost that the US has paid for a single war and the billions of dollars it spends to fortify its military presence in the Persian Gulf, how realistic is it for Khamenei to say that the US must leave?

Of course, it must be underlined that Trump and his team started the current escalation by abandoning a deal blessed by a UN Security Council resolution. If their claim to want new negotiations is true, they cannot achieve this by using only sticks and no carrots. It is significant that even Iran’s pragmatic President Rouhani as so far rejected talks with the Trump administration and chosen “resistance.”

As Tehran has announced that it will breach, on June 27, the limit on its stockpile of enriched uranium and thus violate one of its central limits set under the JCPOA, we might be nearing the end of the diplomatic road that began in 2003 and intensified in 2013. Stuck in the “no talk, no détente” situation, tensions between Iran and the US escalate day by day and the shadow of war looms over the Middle East. Can the Europeans’ new push avert war? Hopefully. If not, as things stand right now, Iran begins to violate the nuclear deal over the next few days and will continue increasingly provocative reactions to Trump’s maximum pressure campaign.

Trump seems to have three choices. Exercise restraint even at the cost of contradicting himself, retreat and falsely claim a diplomatic victory where none exists, or choose a military confrontation. Khamenei also faces similar choices.