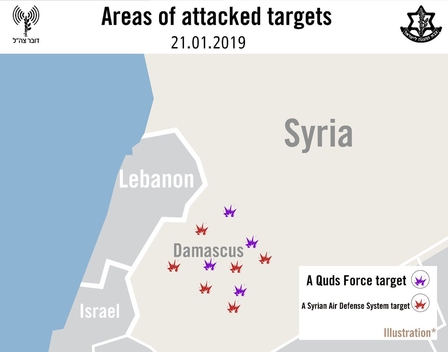 The January 20 Israeli attack on an Iranian weapons shipment delivery near the Damascus airport in Syria led to a quick and exceptional succession of events that could have easily brought both sides to the brink of war.

Iran reacted with a missile launch at the Golan Heights. Israel then responded with an attack on Iranian military targets in the Damascus vicinity. The Israel Defense Forces (IDF) spokesperson’s official statements and briefings that were given to journalists appeared to present a detailed picture of what had occurred on the northern front. However, in spite of the abundance of material published and the unusual openness on the part of Israel, there still remains information gaps and a number of unanswered questions. These require additional examination and interpretation. First and foremost, there is the need to distinguish the background noise from accurate signals.

What did the Iranians launch and why only a single launch? According to the IDF Spokesperson’s official statement, the Iranians fired a surface-to-surface rocket, i.e. an unguided artillery weapon which by definition is not generally accurate. Israeli military correspondents reported a short-range surface-to-surface missile, while some reports mentioned a medium-range missile. The launching of a missile indicates an accuracy capability and therefore has more threatening implications. The IDF spokesperson did not provide further details of the type of rocket or missile that was fired. Israeli officials also did not provide any details about the target, i.e. whether it was a civilian target—the missile flew over the Mount Hermon ski resort which at the time was filled with hundreds of civilians—or a military target.

The Iranians launched a single rocket that was intercepted by Israel’s Iron Dome defense system, which is typically used against short-range rockets. We can therefore assume that the launch was not revenge for an attack on Iranian assets in the Damascus airport, but a signal to Israel.

That single rocket appears to have been intended as a message rather than as a military strike. This is particularly evident when compared with an incident in May 2018 when the Islamic Revolutionary Guard Corps (IRGC) retaliated to Israeli attacks by launching about thirty rockets toward the Golan Heights—considered to be Syrian territory by the international community—and not within the state of Israel proper.

What message Iran wished to convey to Israel and what motivated the launch of a single rocket and risking escalation? Paradoxically, Iran which had turned a blind eye to the many Israeli operations over the past year was pushed into a corner this time and had no choice than to react.

This was in part because of the recent change in Israeli strategy: from a position of not commenting on or acknowledging its military operation against Iran in Syria to one of public statements and taking responsibility for operations. The recently retired IDF Chief of Staff, Lieutenant General Gadi Eisenkot, said in an January 11 interview with the New York Times that the IDF had carried “thousands of aerial attacks” against Iranian targets in Syria during the past years. At the beginning of January, Prime Minister Benjamin Netanyahu also spoke of attacks on “hundreds of Iranian targets” in Syria. Thus, Israel took away Iran’s option to ignore or deny an attack on its military assets in Syria, as it has done in the past.

There were voices in the Israeli security establishment that expressed their opposition to the new public strategy. Reservations were expressed by some ministers who are members of the security cabinet. From their comments, it is not clear whether the decision to take responsibility for the Syria attacks was taken in an orderly manner in the cabinet, or whether this was a direct instruction from Prime Minister Netanyahu in his new role as minister of defense, which was accepted without discussion.

Surprisingly, the Israeli military reaction to the Iranian rocket this week was relatively moderate and not wide in scope. Like Iran, Israel was also sending a message: it has no interest in escalating the military confrontations that have almost become routine in Syria. In this framework, Israel attacked a limited number of Iranian targets in the Damascus vicinity, including intelligence sites, munitions storage depots, and training camps of the IRGC’s Qods Force. This was a measured reaction that did not come close to the massive retaliatory operations in May 2018 when seventy Iranian targets were attacked all over Syria, in which nearly all the infrastructure and garrisons set up by Iran were destroyed.

What message did Israel wish to convey, especially after it had succeeded over the previous year to significantly “roll back” the Iranian military presence in Syria? There is neither IRGC presence close to the border with Israel in the area between the Golan Heights and Damascus, nor are there air, sea, or submarine bases. In addition to the overall strategy—to remove the Iranians from Syria—the Israeli message had a specific goal: to stop the transfer of weapons consignments to storage facilities in the Damascus airport and to remove the Iranian presence from the area.

There is also another element in the equation: Israel and Russia. Until a few months ago, Israel enjoyed complete freedom in Syrian airspace. But after the downing of the Russian Elint aircraft in September 2018 by the Syrian air defense—though Russia put the blame on Israel—Moscow limited Israel’s freedom of action and did not permit Israel to operate in the Syrian coast, where its bases are located. Russia also did not authorize the Syrians to use its S-300 advance air defense systems, which it had sent to Damascus after the September incident.

It is possible that Russian military personnel are involved in their operations—in response to the Israeli attacks which continued in the Damascus area—but the more the civil war drew to its final stages and Moscow succeeded in stabilizing President Bashar al-Assad’s regime, the more the signs of Russian dissatisfaction with the continued Israeli attacks increased.

Russia has since increased its diplomatic pressure on Israel. In a strongly worded statement following this week’s escalating events, Moscow warned Israel and demanded that it stop its aerial attacks in “the territory of a sovereign state.” Russia emphasized that it would not permit Syria to be turned into “an arena for geopolitical settling of scores.” Israel is now faced with a dilemma: how to continue preventing weapons consignments from reaching Damascus’ airport?

Iran and Israel have focused this week on an exchange of strategic nonverbal messages. Both sides are careful not to raise tensions further and have chosen relatively moderate responses. The two players adopted a rational system of deliberation which prevented a dangerous deterioration. However, it is worth remembering the dangers of miscalculation in the military strategy playing field—an incorrect interpretation of the other side’s intentions and slipping into unintended and undesirable consequences. The analysis of intentions is highly complex and it is therefore necessary to act with the utmost caution as to not automatically slip into the worst-case scenario.

One can hope that Russia will step in as mediator to work towards reaching a political solution in Syria that could in part influence Iran to withdraw its forces and return the country to a pre-civil war situation.

Shemuel Meir is a strategic blogger for Ha’aretz focusing mainly on nuclear issues, Iran, and a Middle East Nuclear Free Zone. He is a former IDF analyst and Tel Aviv University researcher. Follow him on Twitter: @ShemuelMeir.