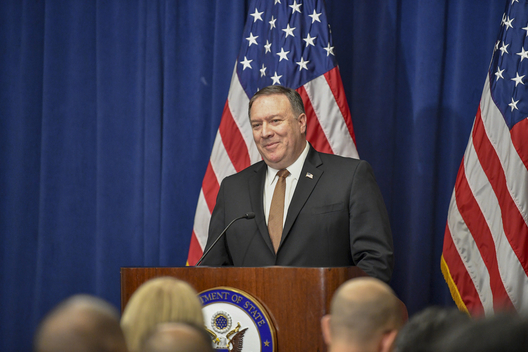 US Secretary of State Mike Pompeo addresses reporters in New York City on May 31, 2018 (US Department of State)

In his January 10 speech in Cairo, US Secretary of State Mike Pompeo described America as a “force for good in the Middle East.”

“We need to acknowledge that truth, because if we don’t, we make bad choices [that will] have consequences for nations, for millions of people,” he said. “In falsely seeing ourselves as a force for what ails the Middle East, we were timid in asserting ourselves when the times—and our partners—demanded it.”

At the same time, Pompeo reiterated the twelve demands he put forward to Iran in a May 2018 speech at the Heritage Foundation. Although he offered Iran normalization of relations if it met those demands, he failed to describe any realistic diplomatic path to reach that goal.

Any diplomatic breakthrough would necessitate at some point offering US policy compromises. One essential element could include attempting to bring Iran into the fold of the 2002 Arab Peace Initiative. This would also require the US to exert substantial pressure on an Israeli government that appears more than ever disinclined to engage in serious negotiations with the Palestinians. The Trump administration has promised to reveal its own peace proposal but that has been repeatedly delayed, now by upcoming Israeli elections.

Persuading Iran to negotiate over regional issues, as well as extending curbs on its nuclear program and establishing a new ballistic missile regime would have to start with an effort to rebuild the diplomatic rapport that has been lost between the US and Iran over the last two years.

This would require US leaders to have the moral courage to acknowledge first to themselves as well as to Iran that the US has not, in reality, always been a “force for good” judging by the profoundly painful experiences of many people in the region. While in some cases the road to hell has been paved with good intentions, in others, American leaders were responsible for unequivocal moral failures that the US has yet to acknowledge. These issues remain at the very core of hostile relations between the US and Iran and could be best imagined as a psychological minefield both sides must navigate to achieve a mutually beneficial set of understandings. A purely transactional diplomatic approach will not prove durable, as the near-collapse of the Joint Comprehensive Plan of Action (JCPOA) is now demonstrating.

Pompeo’s description of America as an unequivocal “force for good” may have been motivated primarily as a psychological defense of the national ego as well as his own core identity more than to persuade an understandably more ambivalent regional audience. Declaring this so boldly to the world when Iranian leaders have experienced a different reality in a profoundly painful way is not constructive. Americans must have the moral courage to look at themselves honestly. Iranian leaders, whose own behavior has glaringly contradicted their stated values, should do the same.

As a West Point graduate and former military officer, Pompeo should know that the ability to accept responsibility for one’s actions is a vital component of leadership. This principle is no less operative among nations, which are not simply coldly calculating geopolitical tectonic plates but are, rather, comprised of humans who are pulled in various directions by powerful emotions and drives, including humiliation and revenge.

The question is how to gradually neutralize these emotions and drives through diplomacy. Human beings are not predestined toward war even if it is also hard to establish peace.

Accepting responsibility for actions that contradict stated values is not an exercise in self-flagellation. It need not paralyze the US from taking actions that may become necessary to decisively address threats from Iran. It would be irresponsible, however, not to assess the risks of continuing on the current confrontational course, including stumbling into a new Middle East war. Americans who have been conditioned to perceive the US-Iran relationship through a good versus evil paradigm may feel that their self-image is threatened by a more complex depiction of reality. Iranian leaders, rather than reciprocating, might cynically exploit any goodwill effort by the US.

There is much to potentially gain, however, and the value of this should not be underestimated: an Iran at peace with other regional states including Israel (even if a cold peace, to start); tens or hundreds of billions of dollars—if not more—in military costs that could be reallocated to reducing the US’s national debt or invested in pressing domestic priorities; greatly improved conditions for the international community to put Iraq, Syria, Jordan, Lebanon and other regional actors on relatively more stable trajectories; the resettlement of hundreds of thousands of refugees; and more political and financial capacity for cooperation on the common threat of climate change.

Pompeo, as a national security leader and self-professed evangelical Christian, should also know that engaging in a preventive war with Iran before diplomacy has been exhausted would be a violation not only of international law but also just war traditions established by Christian ethicists over the course of centuries.

Diplomacy has the potential to change Iranian hardliners’ perceptions of the US as an implacable enemy and thereby increase the probability that the Iranian government will evolve in a more moderate direction, albeit not without setbacks and tensions along the way.

For the sake of Americans and the peoples of the Middle East, may Pompeo find the moral courage needed to navigate these diplomatic minefields.

Thomas Buonomo is an international relations and foreign policy analyst with expertise in US-Iran relations. His writing has been published by the Atlantic Council, Middle East Policy Council, the Washington Institute for Near East Policy’s Fikra Forum, The Cipher Brief, Cairo Review of Global Affairs, Small Wars Journal, Diplomatic Courier, and other outlets. Follow him on Twitter: @ThomasBuonomo.