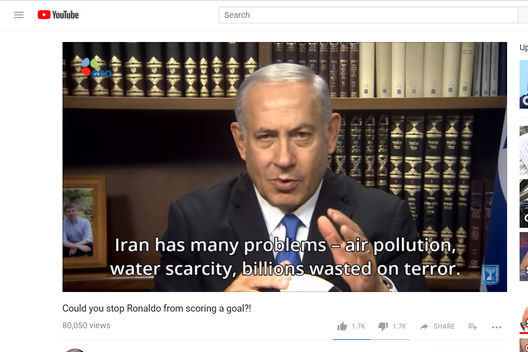 In 2015, a glaring Netanyahu stared down the United Nations General Assembly in silence for almost a minute. The gesture was to protest what Netanyahu described as the organization’s lack of action against Iran’s murderous plans to destroy Israel.

More recently, in April, the prime minister held a press conference in which he pulled away black sheets, unveiling thousands of documents and dozens of CDs that Israel’s foreign intelligence agency, Mossad, stole from a Tehran nuclear archive. The data, the prime minister stated, was proof of Iran’s efforts to secure nuclear weapons capability during the early 2000s.

Against this background, it was rather surprising when the Prime Minister’s office began airing in May short YouTube videos of Netanyahu addressing Tehran in a different way. The crux of the clips: Netanyahu doesn’t see the Iranian people as the threat, only its regime.

In fact, Netanyahu is concerned for the well-being of the Iranian people. He stands with them against their oppressive leaders. Netanyahu stated in a May 31 video that the Iranian people are “brilliant,” and that it’s the regime that prevents them from flourishing—in part by diverting Iranian resources to terrorism and regional subversion.

In a June 10 clip, he offered Israeli technology to help alleviate Iran’s water crisis. The prime minister reminded his Iranian viewers that their government stands between them and Israeli technology by banning Israelis from traveling to Iran. However, he stated, Israel will circumvent the Iranian restrictions, by publishing a Persian-language Telegram channel and website about the country’s water shortage that shares Israeli expertise.

During the 2018 World Cup in Russia, Netanyahu commended Iran’s national soccer team for its courage, insinuating that similar courage can be displayed on the political field against their regime.

Like the earlier video, Netanyahu drew a clear distinction between the Iranian people and their regime, and claimed Israeli affinity and admiration for the former. The clips ooze with hipness. A more relaxed Netanyahu replaces the formerly ominous one, as he is seen bouncing a soccer ball at the entrance to his office.

Instead of speaking to a global institution such as the UN, the messages are aired on YouTube. The prime minister’s long, dark pontifications are amended in favor of seventy-second messages of hope. The clips begin with an informal gesture—such as pouring a glass of water—and end with a short, marketing-like slogan, envisioning a future Israeli-Iranian collaboration in the areas of sports and entrepreneurship.

The videos reflect what may amount to a new turn in the Israeli approach to its conflict with Iran. Israel has long been concerned by Tehran’s nuclear program and its regional aspirations, especially in Syria. Now, Israel almost openly calls, in effect, for regime change in Tehran.

At the same time, Israeli officials are careful to calibrate expectations in this regard. As noted, Netanyahu separates his rhetoric between the Iranian regime and its people. He advises the latter that life without the Islamic Republic would be better. This new tact is probably one public manifestation of Israeli-American efforts, reported by Israeli journalist Barak Ravid, to develop a strategy against Iran, including assisting and maybe even fomenting internal dissent in the Islamic Republic.

Israel has been traditionally careful not to intervene in the internal politics of its foes. In part, because past efforts to do so, are generally viewed by Israel’s security elites as breeding mostly adverse effects.

In 1982, Israel invaded Lebanon with a secret goal of inaugurating a pro-Israeli Lebanese president. The goal wasn’t achieved, but Israel remained as an occupier in parts of Lebanon until 2000, and in the process, contributed to the rise of a new foe, Hezbollah. Some 1,000 Israeli soldiers paid with their lives for this “regime change” effort. In 1992, Israel assassinated Hezbollah leader Abbas al-Musawi. This paved the way for a much more able leader that also emerged to be one of Israel’s most formidable enemies in the region, Hassan Nasrallah.

It’s not clear why the prime minister amended Israel’s cautious approach to meddling in internal affairs in the region. Maybe it’s a result of his effective consolidation with the Mossad. It may also reflect Israeli adaptation to the new global norms of external interfering in internal politics, as seen by the Russian intervention in the 2016 US elections.

It’s also interesting that the prime minister is spearheading the effort himself, in the most public of ways. Gone are the days of mid-level intelligence officials such as Kermit Roosevelt secretly conniving to topple the prime minister of Iran during 1953. Now, a head of state is leading the charge.

This may be a reflection of the continued direct involvement of leaders in diplomacy, what Hebrew University’s Piki Ish Shalom called the “king diplomat.” This is even more pronounced with the Israeli prime minister.

Before Netanyahu was elected in 2009, Israeli comedy show Erezt Nehedert (“a wonderful country”) mocked his monarchic approach to democratic politics, at least in comparison to his first tour as prime minister during 1996 to 1999. Even Time Magazine had a 2012 cover with the title, King Bibi. Perhaps it’s Netanyahu’s own sense that his videoed pleas can change history, such as a clip during the 2015 elections to rally his voters against the Israeli left who were falsely accused of  “bussing the Arabs to the polling stations.”

Either way, Netanyahu’s populist policy delivery now resembles that of US President Donald Trump’s: announcing policy on social media, directly to the citizens. It’s ironic, that in their struggle against the Iranian theocracy, Netanyahu and Trump choose a populist avenue that subtly undercuts the building blocks of their own democracy and state structures, traditional media outlets, and the professional foreign policy and national security establishments.

Before Trump, there was a more authentic approach by Israelis and Iranians on social media—the 2012 projects known as Israel loves Iran and Iran loves Israel—to bring about amicable relations between the two peoples. However, this is not the era of people-to-people diplomacy. This is the era of populist leaders.

Finally, the prime minister’s promise of an Israeli-supported technological progress for the Iranian people, if they would only topple the regime, reflects Israel’s own image in the last decade as a “start-up nation.” It also echoes an old Zionist theme: rejected as outsiders, the Jews can gain legitimacy by alleviating a lagging region through the introduction of innovation and technology. Palestinian leader Musa al-Alami rejected the idea in the 1930s when presented by Israel’s first Prime Minister David Ben-Gurion during a secret dialogue.

In the 1990s, when Ben-Gurion’s acolyte Shimon Peres offered a “New Middle East” based on the same idea, many in the region saw it as a conspiracy that would lead to Israeli economic domination of the region.

If history is any indicator, the promise of technology doesn’t lead to a shift in political attitudes in the region, at least not towards Israel.

Ehud (Udi) Eiran is an Assistant Professor at the University of Haifa, Israel, and a board member at Mitvim, The Israeli Institute for Regional Foreign Policies. Follow him on Twitter: @EhudEiran.