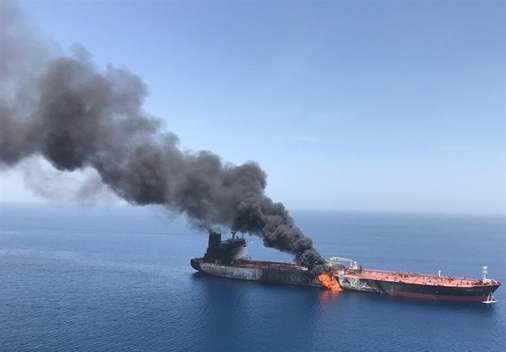 Despite repeated assertions by regime officials in Tehran and key members of the Trump administration regarding a mutual desire to avoid war, tensions in the region continue to rise.

With each side seemingly determined to push the other up to, but not beyond poorly defined red lines, an increasingly volatile situation is developing. Given the poor state of diplomatic relations between the US and Iran and an inability of the two nations to communicate at the military to military level beyond the most basic tactical contacts, the opportunity for even a minor miscalculation to develop into a much more serious strategic incident remains disturbingly high.

There is no doubt, on either side, that a direct military confrontation between the two nations will have a decidedly unfavorable outcome for Iran. The acceleration of a carrier strike group and movement of several strategic bombers into the Middle East—neither of which considered to be a heavy lift for US forces—were apparently considered significant enough actions by Tehran to cause regime officials to reconsider planned actions designed to counter increased sanctions and oil waiver retractions.

Still, the movement of US forces was followed by attacks in mid-May against four ships near the UAE port of Fujairah; two ships near the Strait of Hormuz in mid-June; on a Saudi oil pipeline and civilian airport; attacks largely but not yet factually attributed to Iran or one of its proxies.

Continued attacks that are difficult to directly attribute to the Iranian regime or Islamic Revolutionary Guard Corps (IRGC) are likely Tehran’s preferred course of action as tensions continue, making the opportunity to inadvertently cross either a US or coalition partner red line increasingly possible.

It would be useful to consider what Iranian military forces bring to the table, should matters get out of hand. The regime has been under some form of sanctions since its inception and much of its military equipment predates the 1979 revolution. Despite this, the regime has proven itself adept and innovative and while there is no doubt the US will prevail, a fight with Iran would be disruptive for the nations in the Gulf, harmful to the global economy, and would come at a cost to the US that would not be inconsequential.

A direct confrontation would likely not involve many ground troops and would be air and maritime focused. While most of Iran’s air defense system predates the revolution, the recent integration of the very capable Russian made S-300 air defense system, the only major weapon system acquisition the regime has ever completed, marks a substantial upgrade to their air defense capability. The Iranian Air Force, an unfortunate mix of pre-revolution western aircraft and post Desert Storm Russian-made Iraqi aircraft, will likely contribute little to Iran’s air defense and less to its ability to project power into or across the Gulf.

The Iranian Navy (IRIN) is mostly made up of pre-revolution ships with 1970’s technology. The IRIN reflects Tehran’s desire to possess a blue water Navy and its inability to currently do so in any meaningful way. It maintains a few Russian-made Kilo class submarines and numerous “midget” submarines, which can be difficult to detect in the Gulf’s quirky water. The traffic separation scheme that ships use to transit the Strait of Hormuz in order to ensure the safe conduct of a high volume of very large vessels in fairly narrow waters, also make the entry and exit points a good place for a submarine to lie in wait.

The IRGC represents the significant fighting force in the country, possessing both the most modern capabilities and the confidence of the Supreme Leader. Iran possesses substantial numbers of ballistic missiles and in December 2018, the IRGC-affiliated Tasnim News Agency announced that Iran has developed anti-ship ballistic missiles. Iran also possesses anti-ship cruise missiles that can range most of the Gulf; mines that are capable of disabling or sinking ships that routinely transit the region; fast attack and fast inshore attack craft (FAC/FIAC) armed with machine guns, rocket propelled grenades or high explosives for use as suicide craft; and unmanned aerial vehicles (UAVs). A substantial portion of this capability, particularly mines and FAC/FIAC are routinely kept in a high state of readiness, especially during times of increased tension. UAVs, which can be used for surveillance or as weapons, or both, are a routine presence over the Gulf.

A direct confrontation may very well begin with further attacks that are difficult to factually attribute to Iran—similar to the Fujairah attack—or it could be something more provocative, but still difficult to positively attribute to Iran, such as covertly placed mines at key shipping nodes in the Gulf or a “misunderstood” action by a Fast Attack Craft. Either type of attack could quickly escalate. US and coalition partners would almost certainly take some hits in the early action, but Iran has the most at risk.

The US policy of exerting maximum pressure on Iran makes sense if it is designed to incentivize changes in behavior, especially with regard to ballistic missile development and malign behavior throughout the region—the two areas the Trump administration finds lacking in the 2015 nuclear agreement. However, exerting maximum pressure without clearly articulating the goals of such a policy and without apparently providing diplomatic mechanisms to negotiate a path where any improvement in Iranian behavior—especially in Yemen, Syria, Iraq and Lebanon—can result in benefit to the regime, will only increase tension and increase the likelihood of miscalculation—one that all sides will regret.

Image: An oil tanker that was attacked on June 13 (Tasnim News Agency)