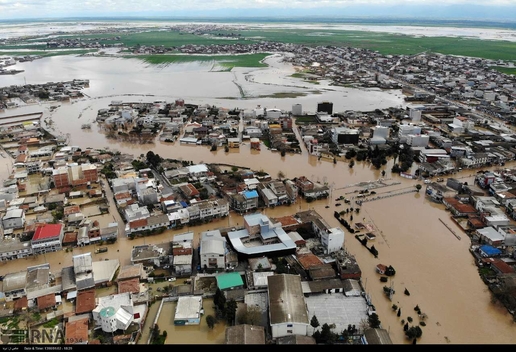 The Iranian new year, Nowruz, is supposed to be a time of joy and celebration when Iranians visit family and go on vacation in other provinces. But for many this year, it was a time of sorrow and loss. Heavy rains, first welcomed in the drought-stricken country, turned into catastrophic floods. Twenty-eight of Iran’s thirty-one provinces were underwater during the two-week holiday.

So far, 43 people have reportedly died in flashfloods and tens of thousands have been displaced. The historic city of Shiraz in Fars Province was the hardest hit, with 19 dead.

According to the Washington Post, “Part of what made the city so vulnerable to flooding amid seemingly less-than-impressive rain amounts is its location in the Zagros foothills.” This may have prompted a funneling effect in the capital of Fars province. The World Meteorological Organization reported that Shiraz gets an average of 1.91 inches of rain every March, but the torrential rainfall this time totaled 2.33 inches—more than a month’s worth in just a few hours.

Early investigation into the flooding also shows negligence on the part of the local government. The governor of Fars province claimed that warnings were issued two weeks prior to the floods. Angry Iranians took to social media to point out that if there was cause for concern, vulnerable streets should have been blocked. As one Iranian Twitter user (@musafa_sh) commented in Persian: “How are you able to block people on [Cyrus the Great Day] and not even allow a bicycle to enter Pasargadae, but when you know people’s lives are in danger you can’t block them then?”

Environmental experts have noted that the loss of vegetation and soil as well as deforestation have made water more likely to run off than be absorbed into the ground. The deputy for construction to Mazandaran’s governor denied any correlation. Still, over the years, the Iranian government has been guilty of poor water management and has become complacent about flooding in part due to the extensive construction of dams. At an event at the Atlantic Council on March 27, Kaveh Madani, a former deputy head of Iran’s Department of the Environment, noted that “people have lost the memory” of flood plains because of dams. With record rainfall caused in part by climate change, the dams that have been built are now insufficient to prevent flooding. But the reaction, Madani explained, is that Iran should build even more dams.

In the most recent case, it took two days for a government response to the humanitarian disaster that began to spread on March 19. It didn’t help that emergency responders were overwhelmed, and possibly understaffed due to the Nowruz holiday.

Iran’s president, Hassan Rouhani, was reportedly vacationing on Qeshm Island in the Persian Gulf when news of the floods made headlines. Reuters reported that many Iranians on social media criticized him for remaining on holiday in the south, while floods devastated the north. By March 23, Rouhani ordered the Interior Ministry to hasten plans to help residents in Golestan and Mazandaran provinces. Vice President Eshaq Jahangiri, who arrived in Golestan’s capital, Gorgan, that day, reportedly fired its governor because he didn’t cut a trip abroad short to address the devastation.

On March 26, a video emerged of the head of the Islamic Revolutionary Guard Corps (IRGC) Major General Mohammad Ali Jafari, trudging through the murky waters of Golestan province to visit flooded areas.

It took seven days for Rouhani to finally visit provinces hard hit by the floods—likely a response to Jafari’s visit. At a National Disaster Management meeting in Golestan province on March 27, responding to criticism, Rouhani said, “I had planned to come in the first days, but ultimately due to considerations, it was decided the first vice president would travel here.”

Much of the criticism of the Rouhani administration’s slow response to the floods was found on social media and came from hardline government officials. It’s estimated that the floods caused millions of dollars in damage to farms, homes, and infrastructure. The Iranian government has pledged 7.1 trillion rials (about $169 million) in compensation to those impacted by the floods.

Pope Francis “expressed sorrow” for the Iranian flood victims and prayed for those who lost their lives, while the State Department’s Persian language Twitter account (@USAdarFarsi) tweeted condolences to the families of the flood victims on March 25 and said that the United States is “always ready to help.” (How exactly it can help given US sanctions is unclear, although some US-based NGOs reportedly have licenses to collect donations.) Austria, Armenia, and Turkey have also stepped in to offer humanitarian assistance.

Iran’s Energy Minister Reza Ardekanian, who also manages the country’s dams and water supply, blamed the floods on climate change. “Climate change is forcing itself on our country” and is part of a worldwide problem, he said. However, experts such as Madani blamed poor management of resources as well as the Iranian government’s persecution of environmentalists with ties to the West.

In the past, some Iranian officials have relied on conspiracy theories to shift the blame for environmental challenges and humanitarian disasters. In July 2018, the chief of Iran’s civil defense claimed that neighboring enemy countries, including Israel, were stealing Iran’s clouds and snow—essentially blaming outside forces for a prolonged drought.

Madani denied any notion that a conspiracy was behind the devastation by tweeting: “The recent floods in the country were not caused by rain-laden clouds, the HAARP project, or the stealing of clouds!” He repeated this comment at the Atlantic Council’s ‘Environmental Security in the Middle East’ event.

The Rouhani administration hired Madani, an Iranian-born water conservation expert, from the Imperial College London, in 2017 to deal with Iran’s water challenges but he ended up fleeing the country a year ago. Madani was constantly harassed and interrogated by the intelligence arm of the IRGC who viewed him and other environmental experts with suspicion. Since February 2018, a dozen environmentalists have been rounded up and imprisoned on bogus charges. Kavous Seyed-Emami, a prominent Canadian-Iranian academic and environmentalist, reportedly died under suspicious circumstances—leading some to believe he was tortured to death.

Meanwhile, Ahmad Reza Djalali—a Swedish-Iranian with crisis management expertise—who is facing the death penalty, was interviewed at Evin Prison through an intermediary. Djalili explained that most emergency response drills focused on earthquakes, and that the threat of floods has been largely ignored. He added that part of what contributed to the floods in Shiraz was the obstruction of flood outlets and dry river beds by construction.

So far, Rouhani’s slow response has only further angered Iranians who had already grown frustrated by his broken promises and the poor state of economy, which has been hammered by a combination of re-imposed sanctions, mismanagement, and corruption.

Recognizing climate change is a start. But a bigger gesture would be for the Iranian government to admit its own faults in contributing to the country’s environmental challenges, while consulting and working with Iran’s foremost environmental experts instead of jailing them and chasing them into exile.

Unfortunately, for the time being, the Iranian government has chosen the opposite route.