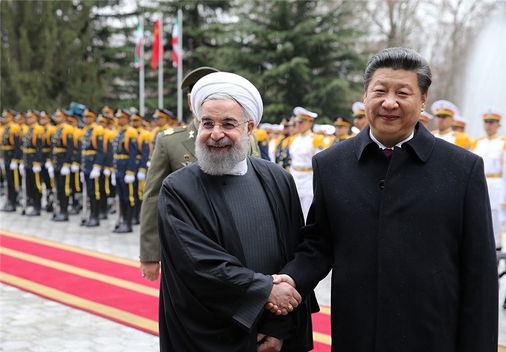 A powerful trend at the international level—led by the United States, Israel and Saudi Arabia—is trying to sell the idea that Iran’s active regional presence, together with its missile program and location at several of the world’s geostrategic chokepoints, is an attempt to restore the Persian Empire and is a fundamental danger to global security.

In its latest effort to combat Iran’s so-called “destabilizing influence,” the Trump administration has planned a conference on “peace and stability” in the Middle East on February 13 and 14 in Warsaw, hoping to turn it into an anti-Iran gathering.

The reality is that, yes, Persia is back, but in a different form and in the context of a strengthening “new Iran.” The return of Iran is mainly based on increasing the power of the “state” in the domain of security and the economy. It is justified by the demands of Iranians to reclaim their country’s regional position, which has been weakened over recent decades as the result of wars, sanctions and the enmity and political pressures of regional and trans-regional rivals.

In recent years, the strengthening of the “state” of Iran has shown itself in two foreign policy trends: “strongest Iran” in the region and Iran in a “strong region.” The first trend perceives that historical determinism will compel Iran to have a strong presence in the region in order to fill security vacuums. From this perspective, Iran’s security and national interests would have been in serious jeopardy if it hadn’t intervened in post-Saddam Iraq and in the Syrian crisis. In Afghanistan, meanwhile, Iran’s decision to directly negotiate with the Taliban is essentially aimed at neutralizing the potential security threat of Taliban participation in the Afghan government and as an inducement to the Taliban to reject relations with the Islamic State of Iraq and al-Sham.

The second trend perceives that the strengthening of the state of Iran in the region relies both on its domestic strength as well as regional stabilization. From this perspective, it is necessary for Iran to balance the strategic constraints stemming from the country’s available economic resources and its perceived need to continue to play in the “great game” of the broader security environment.

The common point in both trends, however, is that there is a strong linkage between national power in the domain of economic growth, security and stability and the country’s active role in regional affairs to tackle imminent security threats. From this logic, only through producing power in the region, at the hard and soft levels, can the country achieve national and sustainable security.

Iran defines power in acquiring economic growth and sustainable security in a “broader security zone.” Iran’s geographic centrality and its historical connectivity with the neighborhood, situates the country at the center of five significant sub-regional systems—the Levant, the Caucasus, Central Asia, South Asia and the Persian Gulf. From this perspective, Iran could be the main crossroads for commerce between the Black Sea, the Mediterranean, the Caspian and the Persian Gulf. Yet benefiting from this connectivity requires sustainable security through pre-empting threats and building up good relations with friendly states to fill the security vacuums stemming from wars and post-conflict situations.

In this respect, Iran has welcomed the Chinese One Belt, One Road initiative and perceives growing relations with China as an opportunity. Also, Iran benefited from the dynamic role of Russia in regional fields, especially in Syria, to preserve Iran’s position in regional equations. Iran is planning for further comprehensive security, political and economic cooperation with Russia to achieve its national interests and goals as the connecting point of Eurasia and the Middle East. Based on the same logic, increased relations with India and Turkey are also in progress.

From the logic of competent geopolitics and regional connectivity, Iran cannot afford to leave Syria and Iraq, or even be excluded in a Yemeni peace settlement, despite the military threats announced by the US and Israel particularly against Iran’s position in Syria. Iran will also preserve its strong presence near geo-strategic chokepoints, especially the Strait of Hormuz. Again, Iran perceives an active presence in its broader security zone as necessary for creating sustainable security and enhancing national power. Yet in this process, Iran is likely to gradually shift from a hard military presence to a soft presence and seek to build up good relations with friendly states and political forces in the region.

Contrary to the US view, Iran’s growing regional influence does not have to come at the expense of the West’s and its allies’ interests. One could note that ancient Persia, Safavid Persia, and the Islamic Revolution—three periods during which an imperial tendency has become strong—are historical rhythms in the Iranian strategic calculus. In the end, Iranian intellectual and policy circles have shown an ability to readjust the country’s orientation to fit changing regional circumstances. In other words, due to current strategic and economic constraints, Iran couldn’t and wouldn’t return to its imperial past.

Ironically, however, US President Donald Trump and his allies’ current policy of “maximum pressure” on Tehran to contain Iran’s regional role could have the reverse result, incentivizing decision makers to intervene more to deter the threats in the region. One reason Iran signed the 2015 nuclear deal was to strengthen its regional position by achieving sanctions relief. Historical experience shows that only a strengthening Iran, with an appropriate regional role commensurate with its resources, has the tendency and domestic consensus to negotiate with the United States.

Both the West and the East will one day need a strong Iran for the sake of a regional balance of power and to counter new security threats with global ramifications, such as battling extremist forces and terrorist groups and other disorders stemming from failed states in the Middle East.

Kayhan Barzegar is the director of the Center for Middle East Strategic Studies in Tehran. He is also an associate professor of international relations at the science and research branch of the Islamic Azad University. Follow him on Twitter: @kbarzeg.