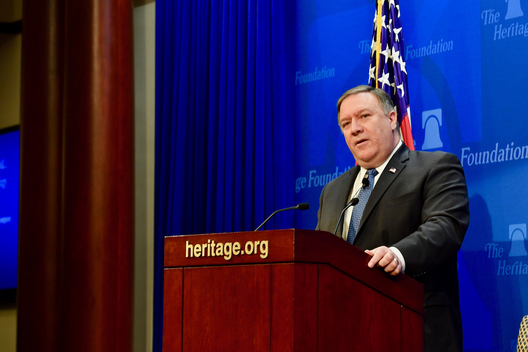 Appearing at a conservative think tank in Washington in May, US Secretary of State Mike Pompeo presented a list of twelve demands that Iran had to meet for the Trump administration to consider new negotiations with the Islamic Republic.

The list covered a wide range of what the US calls Iran’s “malign activities,” from its continued enrichment of uranium—allowed in limited quantities by the nuclear deal President Donald Trump discarded—to its regional interventions and ballistic missile program.

At the same time, the State Department has also increasingly focused on human rights abuses in Iran. Pompeo in July gave a speech at the Reagan Library in California that was entitled “Supporting Iranian Voices.” It dwelled on corruption and repression by the Iranian government. State Department tweets also highlight human rights in almost daily pronouncements on Iran and in recent speeches by Pompeo and other senior officials before the United Nations and hawkish American audiences.

On October 15, Pompeo officially added improvement in Iran’s human rights practices to his 12 demands. In an op-ed in Foreign Affairs magazine entitled “Confronting Iran,” he wrote: “President Trump has made clear that the pressure will only increase if Iran does not live up to the standards the United States and its partners and allies—and the Iranian people themselves—want to see. That is why Washington is also demanding that Tehran make substantial improvements on human rights.”

While the timing of the article was a bit unfortunate—coming as evidence mounted that US ally Saudi Arabia murdered a dissident journalist in its consulate in Istanbul—the administration appears to have no problem with double standards.

Talk of support for human rights in Iran is being amplified as harsh economic sanctions are hitting Iran’s energy and banking sectors. The Trump administration, however, blames Iran for the harm inflicted on its own people.

Brian Hook, the State Department’s special representative for Iran and the main public face of the administration’s “maximum pressure” strategy, has said that “the suffering that the Iranian people are going through economically with the collapse of the rial, the high unemployment, especially high youth unemployment, is a consequence of a regime that has been robbing its citizens for many decades, and they spend that money on revolution outside of its borders.”

Many agree with Hook and his colleagues that mismanagement and an overly expansionist foreign policy are fundamental sources of the problems that Iran is facing today. However, observers also voice concern about US unilateral actions which have a negative impact on the lives of ordinary Iranian citizens. Among the critics is Idriss Jazairy, the UN Special Rapporteur on the negative impact of unilateral coercive measures on human rights. In a recent statement, Jazairy wrote: “There is a need for differences between states to be resolved through peaceful means as advocated by the UN Charter, while avoiding exposing innocent civilians to collective punishment.”

US officials insist that the mechanisms and exemptions the Treasury Department has in place will permit the continued supply of food, medicine and other humanitarian goods to Iran. According to guidance from the department’s Office of Foreign Assets Control (OFAC): “Financial transactions in support of trade in certain food, medicine, and medical devices from the US [or from a foreign country], may also be conducted without specific OFAC authorization, subject to certain restrictions.”

In practice, however, sanctions on Iranian banks make payment for such goods extremely difficult. The Treasury added to the complexity recently by sanctioning Parsian Bank, a private sector bank that has facilitated much of Iran’s humanitarian trade even during prior sanctions periods.

Iran faced similar sanctions from 2012 – 2015. The sanctions that were restored in August and those that are coming in November were suspended after Iran and world powers reached the Joint Comprehensive Plan of Action (JCPOA).

In a report for the Woodrow Wilson International Center for Scholars published in 2013,  Iranian-American analyst Siamak Namazi (currently serving a ten-year prison sentence in Iran on bogus espionage charges) investigated the connection between sanctions and medical supply shortages in Iran. The report concluded that “Iran’s own mismanagement of the situation aggravated the problem, but it is not the root cause of it. While the list of issues leading to the supply crunch is long and complicated, at the heart of it all are the obstacles that sanctions have created in the way of humanitarian trade, namely in denying Iran of the needed banking operations and limiting its access to hard currency.”

Every day, Iranians are writing on social media about the shortage of vital medicine around the country. Once again, citizens criticize the government for mismanagement while acknowledging the role played by US-imposed sanctions. Either way, their basic human rights are being neglected and there is seemingly no prospect of the US and Iran going back to negotiating table and lifting this burden.

Image: US Secretary of State Mike Pompeo delivers a speech, “After the Deal: A New Iran Strategy” at the Heritage Foundation on May 21, 2018 (State Department photo/ Public Domain)