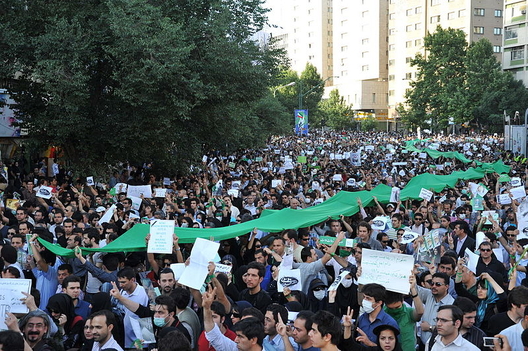 July 15, 2009 was a historic day in Iran’s recent history. Some three million people marched in silence on Enghelab (Revolution) Street in the capital of Tehran to convey their anger at the Islamic Republic in the most peaceful manner.

The regime had disconnected cell phone services in a failed effort to prevent the march, which followed the manipulated “re-election” of President Mahmoud Ahmadinejad, and had announced in advance that any demonstrations would be deemed illegal. When this author reached Enghelab Street at 3 pm, the normal sounds of traffic and yelling vendors had been replaced by silence. Every few minutes, one could hear a “shush” coming from the enormous crowd.

Groups of police in black riot gear sat on the pavement, their batons and shields scattered around them. It was an embarrassing scene; the demonstrators must have surged onto the streets in such unexpected numbers that the riot police could neither confront them nor flee. In an act of compassion, demonstrators offered their water bottles to these men.

The scene that day was testimony to a reality in the Islamic Republic of Iran: the desire for peaceful change is genuine and strong. Forty years after the revolution, frustration with the regime is widespread. The anger simmers beneath the surface but emerges from time to time spontaneously in the form of a march, protest or an overwhelming vote for an unexpected candidate, as in 1997 when Iranians first surprised themselves by electing Mohammad Khatami instead of the regime favorite as president.

Nothing scares the leadership of the Islamic Republic more than the unpredictability of this force and the ability of pro-reform politicians to galvanize it. That is why the regime has jailed hundreds of activists since the early 2000s, hoping it would destroy their ability to mobilize people. But this force and the skill to muster it were demonstrated again in 2013 and 2017, when it brought Hassan Rouhani, a relative moderate, to the presidency to prevent more hardline forces from consolidating control over all aspects of the regime.

This force may not have all the characteristics of a movement, but it has been able to bring about some change and to lessen the government’s control over Iranian society. Yet it is unclear how it will manifest itself in the face of growing economic hardship.

Less than a decade after the silent march, a different constituency surprised the government by taking to the streets in occasionally violent demonstrations. In the late days of 2017 and early weeks of 2018, protests broke out in some one hundred cities and remote areas where demonstrations against the state had not been seen since 1979.

This time, it was the disgruntled lower rung of society that participated, not the middle class. Most protestors were jobless and angry over the economy and some called for the fall of the regime. The protests signaled that support for the government had crumbled in the rural, poor base that had made the 1979 revolution possible and allowed its adherents to stay securely in power ever since.

Unlike the 2009 Green Movement, which coalesced around presidential candidates Mir Hossein Mousavi and Mehdi Karroubi and the demand for a new vote, the new protests appeared leaderless and without a clear agenda. But the protestors were equipped with smart phones and had the ability to organize and communicate with one another. Some 48 million Iranians—more than half the country’s population—have smart phones and are online. Technology helped the protests spread quickly to almost every province, including remote areas. More than two dozen people died in clashes with police and scores were arrested after attacking public property.

The resort to violence spread unease within Iran. Akbar Alami, a former member of Parliament, recently warned that resorting to violence was “utterly senseless” and that it could result in a civil war similar to the conflicts that have torn apart Syria and Libya. “Only peaceful change can avoid severe consequences,” he wrote, calling for a referendum for which the full force of the movement for change could be deployed.

The regime has heard the message of the protests but has so far resisted the idea of a referendum. In an effort to silence those calls, it has sidelined the leaders of the reform movement and placed the leaders of the Green Movement under house arrest since 2011. At the same time, the Rouhani government has sought to safeguard its early accomplishments in reaching a nuclear deal with the West and to remain within that agreement despite the Trump administration’s unilateral withdrawal from the pact and re-imposition of crushing economic sanctions. The country is trying to comply with international regulations, such as anti-money laundering laws, to clear its reputation as a pariah state.

As Iranian society has evolved, social pressure and a chronic crackdown on women over mandatory veiling have lessened dramatically. The regime’s thugs who patrolled the streets to intimidate women have largely disappeared, although much publicity is given to continuing cases of harassment including of women who have thrown off their headscarves entirely.

Even politicians who are considered traditional conservatives have become more pragmatic in an effort to gain popular legitimacy. Ali Larijani, the speaker of Parliament who previously ran as a conservative candidate and who carried out censorship as head of Iranian broadcasting in the early 1990s, is now formally known as a “moderate conservative.” He has sided with President Rouhani, stopping hardline members of Parliament from dismissing cabinet ministers, and has sought support from the reform camp. Having failed at becoming president when he ran as a conservative in 2005, Larijani appears to have ambitions to run in 2021 as a pragmatist.

While it is too soon to predict who the candidates will be given the unpredictability of Iranian politics, during parliamentary elections in 2016 reformers backed Larijani as a candidate from the religious city of Qom, a coalition that would have appeared far-fetched a few years earlier. For now, reformers have said they might throw their support behind him in 2021. Mustafa Tajzadeh, a former deputy minister who was jailed after the 2009 uprising, said: “Until further notice, voting under any condition, to chose between the bad and the worse, is the only alternative.”

It is too early to predict how the presidential elections will shape the future. Many Iranians—including veteran reformers—seem to be losing hope that the system will provide meaningful change. Many worry that the hostility coming from Washington will strengthen the most repressive forces in society. But the new alliances and political flip-flopping are the result of the pressure coming from the grassroots. That force may be leaderless and without an agenda for now, but it cannot be ignored.

Nazila Fathi is a former New York Times correspondent based in Tehran and the author of The Lonely War: One Woman’s Account of the Struggle for Modern Iran. She covered Iran from 1993 to 2010. Follow her on Twitter: @nazilafathi.