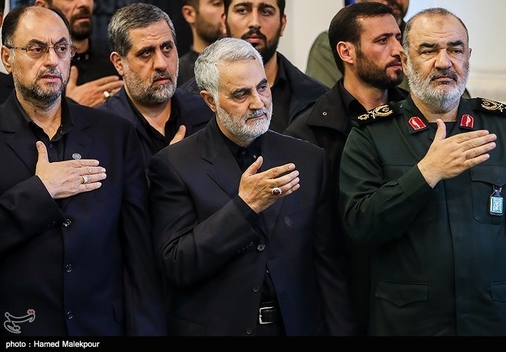 What made you decide to write about the Islamic Revolutionary Guard Corps (IRGC)?
I worked in Herat, Afghanistan from 2009 to 2011, and in Kabul in 2012. There, I witnessed the extent of the Iranian influence, reaching the senior levels of the national, provincial, and municipal governing bodies, the country’s elite, and the rank and file of the Afghan armed forces and police. The IRGC—specifically its extraterritorial branch, the Quds Force, Iran’s lead agency to implement its regional strategy to create an arc of influence across the Middle East—played a leading role in implementing Iran’s strategy and enjoying significant freedom of movement in Afghanistan, especially in the western provinces.

During the next four years, from 2013 to 2017, I was based at the Pentagon as the senior policy advisor for the US Central Command, whose area of responsibility included the Middle East. From there, I could observe the IRGC and Quds Force activities in the entire region. When I joined the think tank community last year, I decided to tell the story of the Quds Force and its military involvements in the region in a language accessible to the general public.

How has the IRGC come to embody the doctrine of the Islamic Republic today?
The Islamic Republic is a complex political system incorporating a national government in charge of running the day-to-day affairs of the country as well as a revolutionary body which has assigned itself the role of leading the Shias in the region in opposing the political order and creating a Shia arc of influence. The IRGC and the Quds Force are the armed forces of the revolution. They are the guardians of the Islamic Republic and the headquarters of Shia militancy in the region.

By spreading its influence across the Middle East, what does Iran hope to gain?
The Middle East is home to Shia and Sunni Muslims. Defending the Shia interest in the region and expanding its influence has been the heart of the revolutionary thought that brought the Islamic Republic to power. The revolution’s founder, Ayatollah Ruhollah Khomeini, told everyone who cared to listen that the revolution was not about Iran, but the entire region. The Islamists in Iran borrowed from the Communist playbook of the early twentieth century and created a governing system that included a robust ideologically-based movement. In place of the Communist International, which advocated communism worldwide, the Islamic Republic created organs that served as the headquarters of the militant Shia movement in the region. Not only to strengthen the government in Tehran, but to maintain a region-wide movement. In fact, the Quds Force was organized to outlast the Islamic Republic as the headquarters of the Shia militancy in the region should the government in Tehran fall.

Where and how does the IRGC operate? Any countries people should be surprised about?
The Quds Force principally operates in the Middle East and Central Asia. It also leads organized activities in Asia, Africa, and Latin America. The Quds Force has also created a large network of non-combatant associates in the West, especially in Western Europe. The network operates front businesses, including transportation and banking, as well as the recruitment of Shia refugees. It operates religious and cultural associations globally to support Iran’s regional strategy and has significant outreach through the media and academic worlds. It’s the vastness of the Quds Force network—such as networks run by Quds Force’s major partners like Lebanese Hezbollah—across the globe that might surprise us.

How did the 2003 Iraq War play a role in the rise of the IRGC’s influence in the region?
The invasion of Iraq had an enormous effect on the rise of the Quds Force into becoming the prominent Shia fighting force in the region. Iraqi President Saddam Hussein had for years minimized Iran’s influence beyond its western borders. In the chaos that pursued post-Saddam Iraq, the Quds Force’s senior officers, along with the Shia Iraqi allies who were living in exile in Iran, entered Iraq and began recruiting Shia youths in southern Iraq to fight the Americans. By the time the US pulled its forces out of Iraq in 2011, the Quds Force and Iraqi militias under its command had expanded their influence within the Iraqi institutions, including the armed forces and federal police. Iran’s control reached levels at which the government in Baghdad increasingly acted as a vassal state.

Why does Tehran mainly rely on commanding foreign nationals to fight its wars rather than Iranians?
The Shia army under the leadership of the Quds Force is organized to gather fighters from all countries with significant Shia populations. This is by design. The Quds Force has been successful in recruiting, arming, and organizing as many as 200,000 Shia youths in different countries of the Middle East. This army will continue to be one of the largest and most significant militant forces in the region. However, the Quds Force’s way of war also calls for use of significant Iranian forces in major battles to augment its foreign Shia legion. For example, in the Battle of Aleppo, thousands of Quds Force, IRGC, Basij, and artesh(army) troops participated. The Iranians also suffered significant casualties in the battle, including the largest number of generals killed in action since the eight-year Iran-Iraq War. Foreign legion augmented by regular Iranian forces is the organizational setup of Iran’s expeditionary doctrine.

What is the West getting wrong about the IRGC and Quds Force Commander Qassem Soleimani?
The IRGC and the Quds Force are the organized armed forces of the revolutionary side of the Islamic Republic. Just because asymmetric warfare and the use of foreign militias are part of their toolbox, it does not mean these forces are not organized for the long haul, even outlasting the Islamic Republic itself. Qassem Soleimani, as brilliant as a military tactician he is, serves as the current commander and is not indispensable. It’s his organization that is built to remain. The West needs to recognize the IRGC and Quds Force as permanent fixtures and the headquarters of the Shia militancy in the Middle East for years and decades to come.

There’s often talk about an Islamic military dictatorship taking over Iran or that Soleimani could be the next president. Does either seem like a possibility?
The Islamic Republic’s operating doctrine calls for a civilian government in charge of day-to-day running of the country as well as a revolutionary organ, which includes the IRGC and the Quds Force as the guardians of the Islamic Republic and its expeditionary force. An IRGC-led military dictatorship negates the Islamic Republic’s doctrine and would be its defeat; hence the very low probability of its occurrence—unless the entire system is on the verge of collapse. Even then, it could be too late of a solution. In my interviews for the book, people who know Soleimani repeated that although he’s a politically ambitious man, he would not agree to run for president. Soleimani has more power in his current portfolio than President Hassan Rouhani or other presidents ever had in the past four decades, a symptom of the dual political system.

How are Israeli airstrikes affecting the IRGC’s efforts in Syria?
The series of successful Israeli airstrikes have caused big defeats in Syria. On May 10, within a span of few hours, the Israeli air force attacked almost all Quds Force-led military installations across Syria. The Iranians were unprepared and underequipped to launch a counterattack. As long as Israel has Russian understanding for its actions, the Quds Force’s plans in Syria remains in ruins. As they rebuild or expand their infrastructures, command and control centers, intelligence cells, bases and runways for the UAV and missile forces in the country, they will continue to be attacked by Israel. For the first time in Syria, the Iranians are engaged against a powerful military against their own military doctrine of asymmetric and proxy warfare avoiding direct engagements with superior forces.

What are some of the challenges the IRGC is facing today?
If the Islamist ideology was the source of strength and the organizing doctrine of IRGC’s extraterritorial branch, the Quds Force, that very same ideology is now creating the conditions for its defeat. Syria is a prime example. After the victory of the Quds Force-led forces in the Battle of Aleppo during late 2016, the Iranians achieved their main goals: Syrian President Bashar al-Assad regime was saved, and the main opposition was all but defeated. Iran could have called it a victory and pulled its troops and its Shia militias out of the country. Instead, it decided to change its strategy, build permanent bases in the country, and engage Israel. Such strategy ran diametrically opposed to the Quds Force’s military doctrine and its way of war. Nonetheless, the Quds Force did change its strategy for ideological reasons, causing the destruction of most of its facilities in the country. Ideology can help the Quds Force up to a point, such as in recruitment of foreign fighters and their commitment to the cause. However, going to the extreme could cause its very own destruction.

What can the West do to curb the IRGC ambitions?
The West can curb the Quds Force’s freedom of movement in strategic locations in Syria, Iraq, and Yemen by taking away its access to major airports and seaports in the region to deliver personnel and materiel to its forces. It can also disrupt its financial and business empire outside Iran. The West can support Israel in its determination to prevent the Quds Force in building permanent bases in the region and curb its plans to upgrade the missile forces of its allied militias. Any such or similar moves could disrupt IRGC’s ambitions in the region. However, the probability of the West taking such course of action is low at this time, unless Iran behaves in a way that would force the West into action.