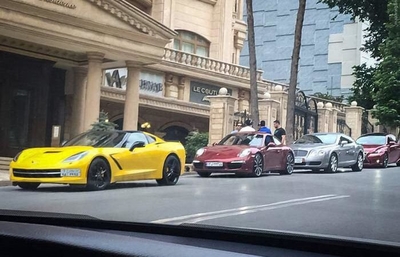 “Iran suggested to me a massive Potemkin village, a facade with people at the top partying and people below struggling,” a cable from the US Embassy in Tehran read during the late 1970s.

Not much has changed since the turban replaced the crown in 1979, except that now the party is behind closed doors and the wealth is displayed on social media for much of Iran to scroll through.

The specific group in question are known as aghazadehs, children of the elite, who live lavishly in Tehran and abroad. The families of the aghazadehs are likened to Russian oligarchs: powerful individuals who profit the most under the Islamic Republic through their connections and familial ties.

Before social media existed, the wealth of the aghazadehs was known through word of mouth: a luxury car sighting, or one of the many opulent high-rises in north Tehran. During the late 1990s, Fatimeh Hashemi—a daughter of one of the wealthiest clerics of Iran, the late former President Ali Akbar Hashemi Rafsanjani—was described in several books and articles as being known for wearing Chanel suits under her chador. According to one anecdote from a New York Times journalist, she also served caviar at a dinner party.

One of Rafsanjani’s sons, Mehdi Hashemi, told another journalist in 2005 when his father was getting ready to run for president again, that the family opposed this because “we have everything already.”

Today the lives of the aghazadehs are no longer the stuff of rumors and anecdotes. Some now share windows into their elitist lifestyles on social media—specifically the photo-sharing app Instagram—where they can garner as many as half a million followers. With the Iranian economy in shambles, partly due to government mismanagement and corruption, as well as the re-imposition of US sanctions, Iranians are paying close attention to the luxurious cars and clothes aghazadehs flaunt on social media.

Radio Free Europe/Radio Liberty’s Golnaz Esfandiari has documented some of the controversies surrounding the aghazadehs social media posts, including the lavish wedding of an Iranian fashion model and designer to the son of Iran’s ambassador to Denmark, as well as the son of the former ambassador to Venezuela, who is always pictured on Instagram in a different Ferrari. Sasha Sobhani once openly bragged about how his wealth was developed through his “own cleverness” and not his father’s diplomatic status. Separately, several Instagram photos of the granddaughter of Ayatollah Ruhollah Khomeini—the founder of the Islamic Republic— have made the rounds, including one of her holding a supposed Dolce & Gabbana purse with a price tag of over $3,700. Though there was debate over whether she was in fact carrying a knock-off, several selfies behind a BMW—a car make that is at least triple the cost in Iran than in the West—confirmed her aghazadeh status.

Ridicule of the Iranian elite on social media isn’t new. In 2014, the Instagram account Rich Kids of Tehran (RKOT) emerged, providing the first real glimpse into the luxurious lives of the nouveau riche. Iranians were quick to criticize the one percenters, even going so far as to start a Poor Kids of Tehran Instagram account to mock them. After all, the RKOT account emerged at the height of the most punitive sanctions the Islamic Republic had up until then faced in its thirty-some years of existence.

Under the multilateral sanctions regime led by the Obama administration, luxury vehicles became so common that a main stoplight in Fereshte-Elahieh—intertwining neighborhoods likened to Beverly Hills—looked like the Monaco Grand Prix. It was a sign that the elites were flourishing under sanctions, while the average Iranian suffered. According to The Economist, German carmaker Porsche sold more cars in Tehran during 2011 than other Middle Eastern city. (This disparity in wealth resulted in some parked luxury vehicles getting keyed in Tehran.) Even restaurants were taking it too far. A revolving restaurant in the highest structure in Iran not only had an outrageous fixed-price menu, but also offered edible gold ice cream.

These days because of the growing economic crisis, more attention is given to the lives of the Iranian government elite than ever before. Public discontent has prompted Iranians to start an anti-corruption campaign on social media that targets the aghazadehs and nepotism. The Persian language hashtag #Where_Is_Your_Child? received so much attention that high-ranking Iranian government officials—including Foreign Minister Mohammad Javad Zarif—started speaking out about their children’s careers and emphasized that they had attended university in Iran.

Recently, a member of parliament said that thirty to forty children of high-ranking government officials studied in the United States, while Parliament also came out with a statistic that over a dozen dual nationals worked for the Iranian government. Former President Mahmoud Ahmadinejad weighed in on the controversy, asking US President Donald Trump on Twitter to reveal the names of the government officials who have US bank accounts or green cards. Ironically, much of the government elite flourished under his presidency.

During Ahmadinejad’s two terms, the elite bubble grew with many families benefiting from black market dealings. As one Iranian businessman noted in 2012, “smuggling has expanded by leaps and bounds. Products whose imports into the country have become officially prohibited are nonetheless brought using the most favorable rate of exchange. They enter the country without paying the slightest fees and customs duties and are subsequently easily distributed throughout the city.” Now with the re-imposition of unilateral and secondary sanctions by the Trump administration, it seems history is repeating itself.

Already corrupt businessmen have used the crumbling Iranian rial and return of sanctions as a business opportunity. This included over 10,000 cell phones imported using foreign currency that was traded at a favorable rate, and 38,000 gold coins being bought at rates below the market. Though the individuals involved in the cases are now going on trial, it’s just one of many examples of the corruption prevalent inside Iran, and how those at the top are profiting since the US withdrawal from the Joint Comprehensive Plan of Action in May.

Most of these corrupt businessmen aren’t known by name, which makes public condemnation a hard task for the average Iranian. The aghazadehs are part of that prolific corruption that permeates Iran, and with some of their lives very public, they are now the target of growing Iranian anger and frustration about the state of the country. As more punitive sanctions are re-imposed in November aimed at cutting off Iran’s oil exports and wealth continues to be accumulated by a select few, the average Iranian won’t just be blaming Trump, but their own leaders.

Image: A Corvette, Porsche, and Mercedes Benz at a stoplight in north Tehran. (Digiato)