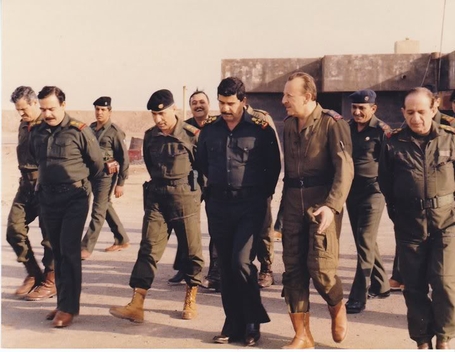 This August marks the thirtieth anniversary of the Iran-Iraq War ending. This tragic eight-year conflict was a transformable event for Tehran and Baghdad. There were over one million casualties on both sides, and the conflict effectively transformed the entire Middle East, too.

The narrative of “futile war” comes to mind when one tries to look at the Iran-Iraq War objectively and retrospectively. Who lost? Or, perhaps one should ask, who gained at the end of this almost decade conflict? The war had many air and ground battles across the 1,000 km border that neither Iraq nor Iran was able to declare permanent victory, or force their will and agenda on the ceasefire which took place on August 20, 1988.

Many Iraqi youth participated in the conflict, and those who were lucky to be unscathed on the war front continued to suffer from post-traumatic stress. The war also created a generation of widows and orphans in which Iraqi society as a whole was neither able to recover from nor the state able to reintegrate due to the 1991 Gulf War and the subsequent punitive sanctions.

For Iraqis, the accumulation of a heavy national debt and the devastating effects on its oil economy meant that then President Saddam Hussein was tricked into this endless war. The Ba’athist propaganda machine used a jingoistic approach by labelling the Iran-Iraq War as the “Arab World eastern borders protection from Iranian hegemony.” Thus, there was more reliance from Arab neighbors and Western countries—including the United States—that opposed the newly founded Islamic Republic of Iran.

This disparity between high Iraqi expectations for rewards from the Gulf Cooperation Council countries (GCC) matched their lack of response and empathy, which further increased tensions and hostile policies implemented by Saddam. Ordinary Iraqis felt that GCC countries pushed and used them to stall the Iranian drive to spread its Islamic Revolution at the time. To make matters worse, the financial support and settlement that some GCC countries promised to Iraq during the 1980 – 1988 war never happened.

As a result, Iraqis view the end of the Iran-Iraq War as the starting point of their country’s economic and social decline. The 1970s oil boom and its parallel economic growth ended only to be replaced by isolationism during the 1990s. For ordinary Iraqis, the first word which comes to their mind when describing the Iran-Iraq War is mat-hana, or “the grinder.” Its ramifications led to Saddam’s invasion of Kuwait in August 1990, which later triggered the crippling multilateral sanctions on Iraq, and arguably the 2003 US invasion of the country.

Did the Iran-Iraq War achieve its objectives? Well, it depends on which side it’s studied from. While the eight-year war did impede the economic growth of Tehran and Baghdad, it entrenched a culture of zero sum between the two countries, and made the Middle East more fragile and unstable. It’s not a small event to forget nor should historians view it as a traditional border war between neighbors. Its ramifications aren’t fully understood yet, and to say the least, it led to the creation of a generation of Iraqis and Iranians in which the use of military and clandestine operations overrides diplomacy and soft power that is now seen today.

At the same time, the war led to a clear polarization within the Arab World, as positions were declared and sides were taken. Syria and Libya sided with Tehran, while Egypt, Jordan, and most GCC countries sided with Baghdad. By 1988, a new geopolitical map of alliances and foes was formed.

The Iran-Iraq War also triggered the rise of sectarianism in the Middle East. It became a tool and justification for heightened political sectarianism, which was used by Baghdad and Tehran and their regional backers. Towards the end of the war, its sectarian nature and the promotion of it as such became a indication of a growing theme within the Middle East.

The GCC states may have spoken in “Arab” and “Persian” terms, but in reality, they meant “Sunni” and “Shia” animosities. Saudi Arabia and other neighboring Arab countries felt threatened by the 1979 Islamic Revolution for its Shia affiliation. As a result, Saddam was then projected as a champion of Sunni Muslims in the face of the new ayatollah-led revolution. Iraqi Shias then became the first victim of this new found sectarianism, as demonstrated by the outcome of the 1991 Iraqi uprisings in the south.

Thirty years later, despite the hardships of the 1991 Gulf War, severe multilateral sanctions, and the 2003 US occupation, generations of Iraqis still haven’t been able to remove the scars of the futile Iran-Iraq War. Its impact is still being felt in the Middle East today.

Lukman Faily is the former Iraqi ambassador to the United States during 2013 – 2016. He also served as the ambassador to Japan during 2010 – 2013. He has more than three decades experience in Iraqi community work and political activism and among the Iraqi diaspora in the United Kingdom. Follow him on Twitter: @FailyLukman.