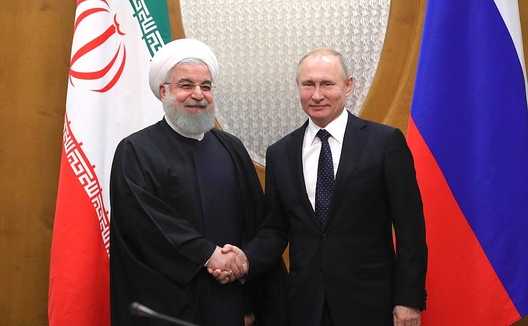 Current tensions in the Persian Gulf are undoubtedly disturbing. Even if war is averted, the region faces a number of negative consequences, including lower investment and tourism as well as rising economic distress in an atmosphere of crisis and uncertainty.

However, every conflict also has its beneficiaries. In the case of the US and Iran, the clearest winner is Russia.

In withdrawing from the Joint Comprehensive Plan of Action (JCPOA) and re-imposing sanctions, the Trump administration is forcing other countries to choose between trade ties with Iran and with the United States—essentially no choice at all. Countries that had been importing Iranian oil have been obliged to stop. One such state is Poland, which started to buy Iranian oil after the JCPOA was reached. However, recently all purchases have been cancelled and now Poland has to buy energy resources elsewhere—currently from the United Arab Emirates but likely more from Russia—its main geostrategic threat—in the future.

Other countries, now unable to do business with Iran, will inevitably have to approach Moscow, whose oil is of lower quality than Iran’s in terms of sulfur content. The list includes Japan, South Korea, Italy and India—all of which had to reduce and then end their purchases from Iran due to US pressure. Furthermore, in the longer term, this may even soften the European policy of sanctions on Russia. This would undoubtedly be a major achievement for the Kremlin.

Although Russia officially supports the JCPOA, the existing split between the US and the European Union regarding the most appropriate approach toward Iran suits Moscow’s strategic interests. Russia’s long-term political and security goal is to undermine Western coherency and unity. Every event that increases discord within the alliance negatively affects the power of the West as well as intensifying anti-US sentiments among many Western Europeans.

What suits Russian interests is the fact that some European countries such as Poland are trapped between the positions of the EU and the US. This causes uncertainty and anxiety among them. At the same time, Russia’s pro-JCPOA rhetoric gives it a chance to build a platform of cooperation between Moscow and the EU, in opposition to the US.

Such a political initiative, bringing together Western Europe and Russia against the US, might find fertile ground in countries such as Germany, which have traditionally maintained good ties with Moscow. Russia also benefits from the fact that due to the current heated discussion about Iran and the crisis in the Persian Gulf, almost all experts and commentators have stopped talking about Russia, its occupation of Crimea and military intervention in eastern Ukraine.

A war against Iran would also shake the Pax Americana regional security architecture in the Persian Gulf, giving Moscow—which has already benefited from its intervention in support of Syrian dictator Bashar al-Assad—greater opportunity to reduce American influence in the Middle East.

Furthermore, a JCPOA collapse and rising US-Iran tensions clearly impact Iran’s domestic politics. These factors intensify anti-Western sentiments in the Islamic Republic and undermine supporters of rapprochement with the West.

The big losers are President Hassan Rouhani and the pragmatist-reformist camp, which as under the administrations of Presidents Hashemi Rafsanjani and Mohammad Khatami in the past, tried to increase cooperation with the West to promote the modernization of the Islamic Republic. It is highly significant that after the JCPOA came into force, Tehran signed various multi-billion dollar deals with Western companies but not with Russian firms. This was not surprising since the West has more to offer in terms foreign direct investment and advanced technology than Russia. As former Iranian ambassador in Russia Nematollah Izadi put it, without sanctions Russia would have “a smaller share of the cake.”

It is obvious that if Iranian rapprochement with the West had proceeded, Russian economic influence would be reduced if not eliminated in Iran. In the current situation and especially if the JCPOA collapses, Iran will have no choice but to increase its ties to the East, including Russia. In other words, the current tensions will force Tehran to rely on Russia in particular for arms and nuclear technology. Without the JCPOA and with new sanctions and the unceasing threat of a war, Iran will also not be able to develop its energy industry—mainly natural gas—and as result it will not become a formidable competitor to Russia.

Finally, there is Syria. The current situation reduces Iran’s financial resources and the country’s ability to devote them to foreign operations, including in Syria, which is considered by Iran to be “the golden ring of the chain of resistance against Israel.” Although for a long time many commentators described Iran-Russia relations as a strategic alliance, this was an erroneous assumption. Moscow and Tehran shared only tactical interests from the very beginning and it is clear that at some point cooperation will turn into competition, because both sides want a dominant position. In Syria—just as in any other arena of geopolitical competition—there can be just one hegemon—either Russia or Iran. The more problems faced by Iran, the lower the chance that it will be able to prevent Russian dominance in a post-war Syria.