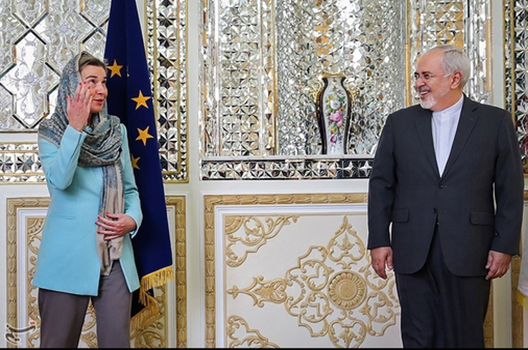 Running out of targets for sanctions, the Trump administration has now put Iran’s chief diplomat on its list of Specially Designated Nationals and Blocked Persons.

The stated reason for this is that Iranian Foreign Minister Mohammad Javad Zarif, who was educated in the US and spent much of his life representing Iran at the United Nations, is too good at his job.

In periodic visits to New York, Zarif meets with think tankers, politicians and journalists and presents his country’s point of view. The Trump administration is clearly irritated that Zarif’s efforts at public diplomacy have been successful, with most of the international community—and many Americans—blaming the US for withdrawing unilaterally from the 2015 Joint Comprehensive Plan of Action (JCPOA) while Iran remained in full compliance.

The practical effect of the designation on Zarif is minimal. As the foreign minister tweeted, “It has no effect on me or my family, as I have no property or interests outside of Iran.”

However, the diplomatic consequences could be significant. As foreign minister since 2013, Zarif was Iran’s chief negotiator in the talks that led to the JCPOA. Should new talks occur—as President Trump has stated to be his goal—Zarif would presumably again lead the Iranian team.

While the US could theoretically still meet with him despite the sanctions, Zarif might balk at participating. Indeed, a major question is whether Zarif—or President Hassan Rouhani—will even attend the upcoming meeting of the UN General Assembly in September, an annual gabfest at which many important side conversations are held. Under an agreement the US signed as the host of the United Nations, it is obliged to admit accredited diplomats and other officials. But the Trump administration could wait until the last minute to give permission or impose other bureaucratic obstacles that would lead Zarif and even Rouhani to boycott the meeting. Last month, the administration restricted Zarif and Iranian diplomats to a six-block radius in New York City.

As part of its “maximum pressure” approach to Iran, the Trump administration appears to feel that it has to keep adding sanctions to the multitude of US penalties on Iran that already exist. The decision to designate Zarif has apparently been in the works for some time. The administration reportedly chose to move forward on July 31 because it had decided for now to forgo suspending waivers that allow foreign governments to aid Iran’s conversion of parts of its nuclear program to non-military purposes. The Treasury Department argued successfully—against reported opposition from national security adviser John Bolton and Secretary of State Mike Pompeo—that such sanctions would require the US to penalize major foreign companies for work that makes Iran less of a proliferation threat.

The latest developments only underline the incoherence in administration policy. While Trump contends that he quit the JCPOA because he wants and can achieve a “better deal,” his current team of top advisers support changing Iran’s government. Both Bolton and Pompeo are said to have supported US military retaliation against Iran for shooting down an American drone that Iran says strayed into its airspace last month. Trump pulled back just before the strike because he feared that it could trigger a wider war and sink his chances for re-election.

Trump reportedly authorized Kentucky Senator Rand Paul to meet with Zarif when the Iranian was last in New York because Pompeo—an ambitious Kansas politician who is expected to run for senator in 2020—has shown such hostility toward Iran that he has undermined himself as an interlocutor with the Islamic Republic. Iran has an even lower opinion of Bolton, who has spoken at the rallies of the Mujaheddin-e Khalq, an Iranian opposition group based in Europe.

The confusion within the Trump administration over Iran policy is having real world consequences. Instead of pushing Iran to end provocative actions in the Persian Gulf, sanctions have incentivized Iran to sabotage a half dozen oil tankers, seize a British ship (in retaliation for the British seizure of an Iranian tanker off Gibraltar) and begin to breech limits on enriched uranium set in the JCPOA.

The Iranians have indicated that they would be willing to talk to the US about matters such as exchanging prisoners, but have apparently been rebuffed by the Trump administration, which recently sent its top hostage envoy to intercede with the Swedes about a jailed US rapper. Meanwhile, at least five Americans languish in Iranian jails.

The US also ignored an offer by Zarif for Iran to ratify the Additional Protocol of the nuclear Non-Proliferation Treaty—which allows for intrusive inspections of Iran’s nuclear facilities—in return for the US Congress legislating sanctions relief. While an apparent nonstarter, the offer could have been a basis for a new dialogue.

The more time goes on, the more it becomes apparent that sanctions have become the end, not the means of US policy toward Iran by default if not intentionally. The longer the US continues to starve Iran of revenues from oil exports, the more Iranian individuals and entities it tars, the more likely the Iranians are to respond in ways that increase the chances of a military conflict that could engulf the Middle East. With Zarif sanctioned—along with Iran’s Supreme Leader Ayatollah Ali Khamenei and the leader of the powerful Quds Force, Qassem Soleimani—there may be no one to talk to in Tehran should a crisis occur.