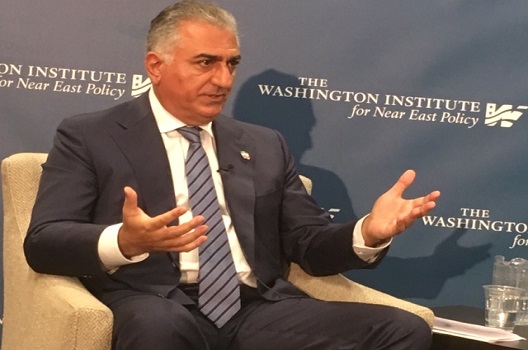 History, it is said, does not repeat but it can rhyme.

An appearance by the son of the deposed Shah of Iran at a prominent Washington think tank on Dec. 14 was reminiscent in some ways of speeches by the late Iraqi opposition leader Ahmed Chalabi in the run-up to the 2003 US invasion of Iraq.

Reza Pahlavi, like Chalabi, insisted that the current government of his homeland is on the verge of collapse because of its destructive domestic and foreign policies. A new democratic secular Iran, Pahlavi also said, would “transform the Middle East,” including by no longer threatening Israel with destruction.

Chalabi used much the same arguments to convince the George W. Bush administration  that overturning Saddam Hussein’s regime would spread pro-Western democracy throughout the region and benefit Israel. Instead, the US invasion further destabilized the Middle East and turned out to be a boon to Iran’s spreading influence.

While calling for “regime change” in Iran – and urging the Trump administration to do the same – Pahlavi said that he does not advocate US military intervention and would like political change in Iran to be peaceful. Unlike Chalaby, who upon returning to Iraq in a US military transport worked to destroy what remained of Saddam Hussein’s institutions, Pahlavi also said that a new Iran would need reconciliation and the participation of current members of its security forces. He said he was in “direct communication with representatives of the military and paramilitary forces” but did not give details.

The appearance at the Washington Institute marked new visibility for Pahlavi, who fled Iran as a teenager during the 1979 revolution. Since the outbreak of popular protests in Iran a year ago, Pahlavi and his supporters have been active on social media and a London-based satellite television station, Manoto-TV, has broadcast nostalgia-laden videos of pre-revolutionary life in Iran.

On Dec. 5, Pahlavi took a seat in a reserved section at Georgetown University for a program on the discriminatory treatment of women in Iran. He spoke afterwards at a private dinner and was photographed with several of the speakers including Masih Alinejad, an advocate for the end of compulsory veiling.

At the Washington Institute, Pahlavi, 58, said that he is not personally ambitious to rule Iran, but suggested he could play some sort of “guiding” role in coordinating opposition to the Islamic Republic and creating a “temporary provisional government” to rule the country after the regime’s fall.

He also said, in response to a question from this analyst, that “I have yet to have any meeting with any member of the current [US] administration” – unlike Chalaby who was the darling of then Vice President Dick Cheney and Deputy Defense Secretary Paul Wolfowitz. Pahlavi seemed open to the prospect, however, saying, “If the [Trump] administration is prepared to talk, that’s great and we welcome that opportunity.”

Pahlavi was careful not to directly criticize the policies of the Trump administration but acknowledged that sanctions re-imposed in the aftermath of the US unilateral withdrawal from the 2015 nuclear deal have “heavily affected the Iranian people” and made it more difficult to send resources to members of the opposition. He said the administration should focus on individuals at the top and seize more Iranian assets in the United States. He did not identify those assets, however.

It’s hard to know how much support Pahlavi has in Iran or in the Iranian diaspora. Some Iranian Americans have urged him to condemn the abuses of his father and grandfather if he hopes to be taken seriously as a future leader.

A sprinkling of Iranian Americans in the crowd applauded Pahlavi’s remarks criticizing the Iranian government for human rights abuses and a foreign policy that uses Iranian resources in support of foreign causes. But unlike those at the American Enterprise Institute that used to cheer on Chalaby at so-called “black coffee briefings,” Iran experts at the Washington Institute were skeptical of Pahlavi’s ability to spur or assist political change in Iran.

Mehdi Khalaji, a scholar of Islamic studies and an expert on Iran’s clerics, moderated an initial discussion with Pahlavi, whom he introduced as “Mister,” not “prince.” “You portray Iran as in a pre-revolutionary condition … but there are differences between now and the last years of the shah,” Khalaji said. “Millions of Iranians are beneficiaries [of the Islamic Republic] and the repressive apparatus is working.”

Khalaji said after the event that despite widespread protests in Iran, they are mostly about economic grievances. He said that the country lacks any “real organized opposition group” inside or outside apart from the Mujahedin-e Khalq (MEK), an exiled cultish former terrorist group that is detested in Iran and that Pahlavi also rejected as undemocratic. Members of the Trump administration – most prominently John Bolton, the national security advisor – and Rudy Guiliani – the president’s personal lawyer – have endorsed the MEK and taken hundreds of thousands of dollars from the organization for speaking at its annual meetings outside Paris.

Patrick Clawson, director of research at the Washington Institute, told this author that Pahlavi had requested the speaking engagement.  Clawson expressed doubt about Pahlavi’s role in a future Iran. “He wants to be Queen Elizabeth,” Clawson said – a ceremonial head of state with no responsibility for governing.

Barbara Slavin directs the Future of Iran Initiative at the Atlantic Council. She tweets @BarbaraSlavin1.