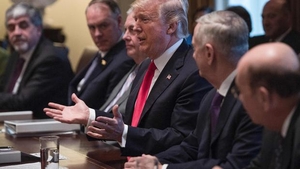 US President Donald Trump (C) speaks during a cabinet meeting at the White House in Washington, DC, on January 10, 2018. / JIM WATSON / AFP/GETTY IMAGES

President Trump has agreed to waive nuclear-related sanctions against Iran again but has threatened to pull the plug in a few months if European countries don’t agree to renegotiate the landmark agreement.

The decision to continue to waive sanctions, announced today, preserves the Joint Comprehensive Plan of Action (JCPOA) until the next deadline a few months from now but perhaps not much longer. A senior administration official, who spoke on condition of anonymity, told reporters “this is the last such waiver.” The US will work with Europe, he said, on a follow-on agreement that would renegotiate the terms of the accord so that its restrictions on Iran’s nuclear program would never expire.

European countries and the other signatories to the deal – namely Russia, China and Iran – have all rejected renegotiation of a complicated accord that took over a decade and two US administrations to achieve.

Indeed, the foreign policy chief of the European Union, Federica Mogherini, said on Thursday, after meeting with her British, German, French and Iranian counterparts: “The unity of the international community is essential to preserve a deal that is working, that is making the world safer and that is preventing a potential nuclear arms race in the region. And we expect all parties to continue to fully implement this agreement.”

The Trump administration coupled its waiver announcement with new sanctions on 14 individuals and entities including Sadegh Larijani, the head of the Iranian judiciary and brother of Iran’s parliament speaker. One administration official said the sanctions targeted the judiciary for its “appalling treatment of citizens” during recent protests in Iran.

US officials also said they hoped Congress would find a way to amend the Iran Nuclear Review Act (INARA) which requires the president to certify every 90 days that the JCPOA is in US national interests. Trump refused to do so in October, but Congress, embroiled in major disputes over other issues, failed to act.

Given the damage Trump’s often-expressed distaste for the accord has already done – creating uncertainty that has dis-incentivized foreign investment in Iran – the decision to renew the waivers for another three months is perhaps the best supporters of the deal could have hoped for but hardly a resounding victory. The effort to convince Trump not to walk away from the JCPOA will have to be maintained and the results are uncertain.

Had Trump refused to waive sanctions again now, he would have put the United States in material breach of the agreement, created a massive new split with Europe and given Iran justification to limit its implementation of the deal. Of course, those same consequences now loom again in a few months.

In the run-up to Trump’s decision, Iranian officials warned that they could cut back access to their nuclear facilities by the International Atomic Energy Agency if the US re-imposed sanctions on Iran oil exports and the Central Bank – the core penalties lifted by the JCPOA. They might also have begun increasing the level of enrichment of uranium limited by the deal.

That the deadlines come as Iran has experienced massive unrest over economic and other grievances is especially important.

Had Trump refused to extend the waivers, he would have given the Iranian government – and its hardline elements in particular – a shiny new scapegoat for the failure of the regime to meet the aspirations of its citizens.

Indeed, Mohsen Sazegara, a prominent Iranian dissident in exile, told a conference call organized by the Atlantic Council that “I hope Trump keeps the JCPOA” because “it changes the subject [from] the protests of the people” if Trump does not.

Sazegara went on to say that he would like the US to put more pressure on the sources of revenue flowing to Supreme Leader Ayatollah Ali Khamenei and the Islamic Revolutionary Guards Corps, which is involved in military intervention abroad and repression at home.

While the new sanctions on individuals and entities announced today do not contravene the agreement, any new sanctions directed at oil exports or the Central Bank would not only violate the JCPOA but also hurt ordinary Iranians, further depressing the value of the currency and boosting inflation.

Critics of the JCPOA have called on the US to “fix it or nix it” but the fixes they propose would violate the accord by unilaterally extending its various sunset clauses and adding new provisions on ballistic missiles. Given the chaos within the Trump White House – largely emanating from the president himself – there are real doubts about the capacity of the United States to participate in the sort of diplomacy required to alter or augment the agreement – assuming any of the other parties would agree, which so far, they have not.

If the US does walk out of the JCPOA, the agreement will likely collapse.

Although European governments have vowed to continue to implement the deal even if the US does not, Sir Peter Westmacott, a former British ambassador to Washington who attended a conference in Tehran this month, said on the Atlantic Council call that without US participation, Europeans alone could not preserve the deal.

Many Iranians – inside and outside Iran – will likely welcome the new sanctions related to human rights, however symbolic they may be. If Trump really wanted to help the Iranian people, he could lift restrictions on Iranians traveling to the United States. The various iterations of the travel ban Trump has sought to impose for the past year are an unwarranted sanction on a population that has never committed a terrorist act in the United States – the ostensible reason for the ban – but that has contributed enormously to the US economy and society.

The US could also help the cause of reform in Iran by lifting restrictions on the export of technology that allows Iranians to communicate among themselves.