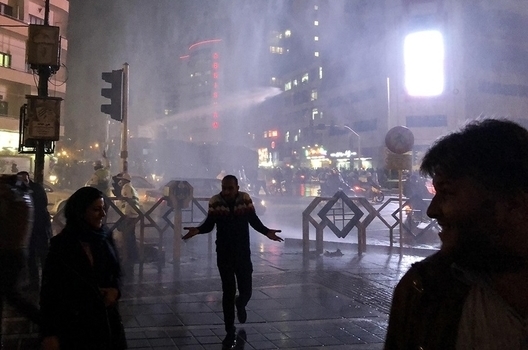 US President Donald J. Trump delivered on his campaign promise and finally withdrew the United States from the Iran nuclear deal; a giant question mark looms.

When the Joint Comprehensive Plan of Action (JCPOA) was agreed in July 2015, the priority for the P5+1 was to keep Iran from acquiring a nuclear weapon. The United States also hoped to eventually see reforms in Iran. For Iran, the priority was the lifting of sanctions.

How far back the deal set Iran’s nuclear weapons program is up for debate. Critics of the deal argue that, not only did the JCPOA fail to prevent Iran from ever developing nuclear weapons, but it freed up more cash for nefarious activities in the region vis-à-vis Syria, Iraq, and Yemen. Iran defends its activities in these states as necessary to clean up problems the United States and Saudi Arabia created.

But as their leaders spend money on foreign wars, the Iranian people have not felt the economic relief the nuclear deal promised. Many still struggle to make ends meet. Inadvertently, the JCPOA put a spotlight on divisions within the Iranian government itself, and exposed the corruption in its spending. Therefore, did the JCPOA help spur popular unrest in Iran, even if that wasn’t the intention of its authors?

Tearing at the fabric of the Islamic Republic

Scenes of people taking to the streets in late 2017 offered the first public indications of the possible fragility of the Islamic Republic as an institution. During the Green Revolution in 2009, protests were politically charged, exhibiting outrage by mostly the middle class at the hardliners for winning the presidential elections over the reformists.

In December 2017, however, demonstrations kicked-off outside of Tehran among the working class, airing grievances against the government’s failed promise to improve Iran’s continued water shortage and pollution crisis.

But the recent protests gradually evolved and, crucially, in a matter of days, revealed threats to the very foundation of modern-day Iran, some going so far as to call for the death of the Islamic Republic itself.

For the first time since the Islamic Revolution of 1979, Iran witnessed wide, sweeping demonstrations across the country that included protesting the ideological fabric of the state. By comparison, the Green Revolution’s largely urban protests focused on electoral outcomes, not the foundation of the government. Hearing “Death to the Islamic Republic” chanted in Farsi and seeing it posted on signs in 2017 was unprecedented. Under velayat-e faqih, Iran’s interpretation of Shia Islamic law, such action is considered “mohareb” – waging war against God and punishable by death.

Advancements in technology over the past nine years have admittedly offered a greater window into the recent protests than was available in 2009, though during the Green Revolution Western media still had access in Iran that has been restricted since. More recently, limited visas to foreign journalists means more reliance on social media. And in 2017, high tech communication apps and the ability to use VPNs to circumvent government restrictions also emboldened demonstrators. But reliance on technology is a slippery slope: without physical presence in the country it is extra difficult to verify the content being shared.

The Iranian government played down the scale and significance of recent protests. They acknowledge dissatisfaction as part of society but do not interpret that as wanting chaos or regime change.

Protests have continued periodically in various parts of the country since the widespread demonstrations of late 2017, and the most poignant messages are those heard in Farsi that say, “our enemies are right here.” The Iranian government’s official message that Americans are to blame for their hardship seems to be losing steam.

The Iranian public is largely pro-American – in 2015, the nuclear deal was met with celebration in the streets of Iran’s bigger cities like Tehran, Shiraz, and Isfahan. It was sold as a beacon of hope and an end to isolation from the West, with a promise that investment would be pouring in so fast Iranians wouldn’t be able to keep up.

The international sanctions regime that preceded the JCPOA put immense pressure on the Iranian government. Iranian officials would likely argue US pressure did not bring them to the negotiating table, but the fact of the matter is that US-led international economic sanctions on the Islamic Republic’s banking sector crippled the country. The sanctions also hurt the population directly, even in the form of medicine shortages, and the propaganda machine pointed fingers at the Americans to try to win support. The people were at their wit’s end.

But in June of 2013, there was a ray of hope for change: the surprise election of reformist President Hassan Rouhani, who expressed openness to negotiating with the West.

Several months after his election, US President Barack Obama and the newly-inaugurated Rouhani had a historic phone call on the sidelines of the United Nations General Assembly. This marked a cautious détente between their two countries, whose diplomatic relations had been severed for over thirty years.

The public later learned secret talks had occurred between American and Iranian officials in Oman around the time of the presidential phone call. There were also talks a month prior, when the United States was weighing whether to take action against Syrian President Bashar al Assad – Iran’s ally – in response to a confirmed chemical weapons attack, which Obama had previously said was a “red line” that would trigger an American response.

Then-Secretary of State John Kerry ultimately (and accidentally) spared Obama that decision. He instead developed an alternative plan wherein Russia would lead the effort to remove Assad’s chemical stockpile from Syria. Former officials maintain the chemical weapon and nuclear issues were unrelated. But as Syria’s war rages on, the impact of Obama’s desire for a nuclear deal on his calculation to step back from the red line remains a subject of fierce debate.

The P5+1 nonetheless reached the landmark nuclear deal in 2015, offering some hope for better relations between the United States and Iran. US domestic politics, however, transformed Iran from one of the few bipartisan issues in Washington to one of the most polarizing.

The post-deal narrative split Washington into two camps: pro-deal and therefore pro-peace, or anti-deal and beating a war drum – echoing the Bush-era “with us or against us.” Even some journalists, traditionally meant to be objective and neutral on issues they cover, took positions.

But the mistake many US lawmakers and observers continue to make is defining a complicated, complex country like Iran in black and white terms. Any Iranian-American will tell you the nation is layered in gray – it’s the Persian way.

The United States misses an opportunity?

Now the US has pulled out of the deal and it appears to be the beginning of the end of the JCPOA in its original form.

As Trump was about to make his announcement, a contact in Tehran told me the mood was “tense,” and people were upset because “they know the rial will plummet more and the government can’t do anything. As always.”

“I see a bewildered and angry nation in Tehran’s streets,” said an Iranian who wished to remain unnamed.

Iran’s public does not seem to have faith its government can turn around the economic effects of the United States’ JCPOA withdrawal and re-imposed sanctions, but there are also mixed emotions toward the United States and the West. Iranians feel caught in the middle and abandoned by everyone. This feeling is perhaps best encapsulated by a cartoon circulating on social media featuring a family at the center of a burning American flag on one side and the nuclear deal, lit aflame, on the other.

With US media transfixed on the JCPOA and Trump’s every twist and turn, there has been little coverage of the fact that discontent continues to simmer under the surface in Iran. And for all the Trump team’s talk about what President Barack Obama did wrong in 2009, the response to Iran’s recent widespread protests has largely consisted of some presidential tweets and little else publicly since then. Trump’s written Nowruz message did attack the Iranian government directly, but short of mentioning that the Iranian people are hostages of their government at the end of his recent JCPOA announcement, Trump has not addressed them directly or extensively on camera.

What’s next for Iran remains to be seen. The rial is in free fall and unlikely to recover without reforms.

The Trump administration has promised to re-instate crippling sanctions with the hope of getting Iran to the negotiating table for a better deal. In their view, it worked with North Korea, so they think it will in this case, too.

But Iran is not an isolated state like the DPRK. It has a firm footprint in the Middle East and has established itself as a hegemon. And the “psychological warfare” Rouhani touched on in his almost instantaneous response to Trump’s announcement is worthy of its own separate discussion. It is incongruent with Iranian psychology to speak of regime change and then expect the regime will come back to the negotiating table.

How the Iranian government’s message is spun as the financial faucets run dry and whether it resonates with the 80 million Iranians seeing their window to the West close will be important to watch. How the population reacts as this reality sets in and whose side they ultimately take is key; from here on out, it could get worse for the Islamic Republic.

Suzanne Kianpour is a correspondent for the BBC covering foreign affairs, national security, and Congress. Follow her on Twitter: @KianpourWorld