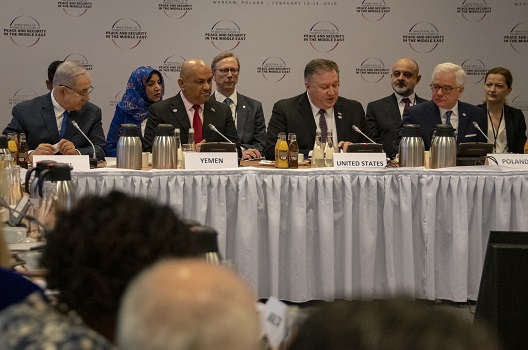 The Trump administration has sought to break out of its international isolation on Iran by pressuring nations to go to Warsaw for a summit on peace and security in the Middle East. But the administration has failed to craft an effective multilateral approach towards Iran based on common concerns and a realistic understanding of what is achievable.

Despite White House backtracking from an initial expressed aim to focus on Iran, US officials and regional leaders such as Israeli Prime Minister Benjamin Netanyahu used the occasion to unleash rhetorical barbs against Iran—which was not invited.

Many other key countries and parties, such as Russia, China, Turkey, Qatar and the Palestinians, boycotted the Warsaw meeting; US European allies, apart from Brexit-burdened Britain, sent only mid-level representatives.

The Trump administration has attempted to compel key partners into adopting its objectives towards Iran, such as withdrawal from the Joint Comprehensive Plan of Action (JCPOA). However, other powers have made clear their desire to continue to engage Iran politically and economically. Indeed, these powers have not lost sight of the fact that Iran—for reasons having to do with its size, location and natural resources—is and will continue to be a regional power no matter what its form of government. This is not only reflected in their aim to preserve the JCPOA, but also their belief that Iran must be a component of any sustainable order in the Middle East.

Notably, the Warsaw summit overlapped with the latest round of Syria peace talks between Iran, Russia and Turkey in Sochi. These “Astana-process” negotiations highlight another approach to multilateralism: one based on fostering cooperation between opposing powers based on mutual interests. In Sochi, the parties continued negotiations on a political settlement in Syria, hashing out details of a constitutional committee comprised of figures approved by the Syrian government and opposition.

The Sochi talks are realpolitik exemplified, with the different sides recognizing each other’s respective interests and engaging in a carefully deliberated process to reach a comprehensive agreement through direct negotiations. They challenge the Trump administration’s ostracism of Iran, which is based on abrogating the JCPOA—which was codified by a UN Security Council resolution—and coercing other countries into compliance with US secondary sanctions.

Meanwhile, since the JCPOA’s implementation three years ago, the European Union (EU) has supported dialogue with Iran to help resolve the region’s many other crises. A case in point was the recent EU statement announcing the launch of a financial vehicle designed to facilitate trade with Iran despite US sanctions. The statement hailed Iran’s “public support for the UN talks in Sweden,” which produced a limited agreement among Yemen’s warring parties. Last year, EU officials also noted “good progress” in talks with Iran on Yemen, with Tehran showing “itself willing to push for a ceasefire and ease the humanitarian crisis.”

Importantly, the statement also stressed that the EU was “gravely concerned by Iran’s ballistic missile activity” and said that efforts to increase the range and precision of Iranian missiles “deepen mistrust and contribute to regional instability.” This reflects the EU’s view that addressing the challenges posed by Iran need not conflict with a constructive engagement policy.

India and China have also not turned their backs on multilateralism that includes Iran. Both countries have adopted grand strategies to increase their influence in regional configurations of which Iran is a linchpin. China’s Belt and Road Initiative (BRI), which is intended to reduce Chinese reliance on the US-controlled Strait of Malacca by expanding commercial and political ties across Eurasia, is partly premised on gaining cheaper, quicker, and more secure access to Persian Gulf energy via land routes. Iran not only has the world’s largest combined reserves of natural gas and oil but it is strategically situated between the Caspian Sea and the Persian Gulf and at the crossroads of Europe and Central Asia. China has thus made massive investments in Iranian infrastructure projects and voiced support for Iran joining the Shanghai Cooperation Organization (SCO).

India’s counter to the BRI, the International North South Transport Corridor (INSTC), also holds a special place for Iran. The project aims to connect St. Petersburg and northern Europe with the Persian Gulf and the Indian Ocean via Central Asia and the Caspian Sea. On February 5, India and Russia signed a memorandum of understanding to expedite INSTC’s creation with the aim of facilitating trade via Iran. Nasrollah Tajik, an Iranian diplomat and former member of parliament, said after the MOU was signed: “The implementation of this corridor, which has been delayed for years… will give a unique role to involved countries to develop Eurasia economically.”

The Iranian port of Chabahar, which sits alongside the Indian Ocean, is key to India’s geopolitical goals with INSTC. It would allow India to circumvent its rival Pakistan and gain access to Central Asian markets, including Afghanistan, for which Indian investment is vital. Notably, for all its proclamations about bringing “maximum pressure” on Iran, the Trump administration granted a sanctions waiver to India to continue its development projects in Chabahar, tacitly acknowledging Iran’s role in balancing potential Chinese dominance on the Eurasian landmass.

Unlike the United States, other powers do not seek to deny Iran a role in the regulation of regional matters, especially on issues Iran sees as vital to its national defense and where it can act as a spoiler if sidelined. A more effective US strategy towards Iran would embrace inclusive multilateralism and pivot towards aligning with the EU’s carefully calibrated dual-track policy that balances engagement and pressure. Such an approach would help achieve Western interests vis-à-vis Iran and prevent US great power rivals from making deeper inroads into the Middle East.

Image: US Secretary of State Michael R. Pompeo delivers opening remarks at the Ministerial to Promote a Future of Peace and Security in the Middle East, in Warsaw, Poland on February 14, 2019. (State Department photo/ Public Domain)