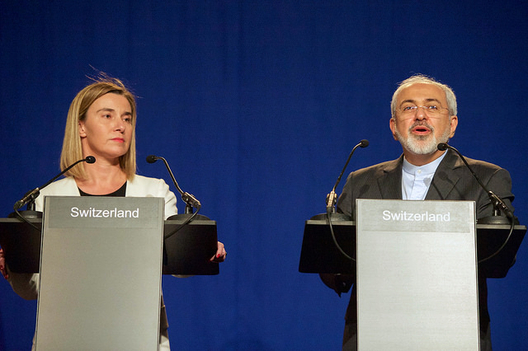 “You cannot swim without getting wet,” Iranian Foreign Minister Mohammad Javad Zarif told the annual International Mediterranean Dialogues Conference last week, signaling that Iran is losing patience with European leaders and expects the European Union (EU) to back up its political support for the Joint Comprehensive Plan of Action (JCPOA) with concrete actions.

Six months have passed since the Trump administration unilaterally pulled out of the nuclear agreement, and nearly a month since the US re-imposed secondary sanctions on Iran’s oil and financial sectors. Under the terms of the JCPOA, Iran agreed to curb its nuclear activities and to allow for a stricter international inspections regime. In return, all nuclear-related sanctions against Iran were supposed to be removed to facilitate the country’s re-engagement with the international economy.

Instead, the Trump administration has launched an unprecedented pressure campaign against Iran in violation of UN Security Council resolution 2231 which reaffirmed the JCPOA and mandated all UN member states to abide by it. Through its secondary sanctions, the US has threatened to target companies as well as countries that trade with Iran. On the other hand, since the US withdrawal, the International Atomic Energy Agency (IAEA) has verified multiple times that Iran has been fully complying with its obligations under the JCPOA. Iranian officials including President Hassan Rouhani have indicated several times Iran’s willingness to continue fulfilling its obligations as long as the other parties (the EU, Russia and China) provide the economic benefits that Iran expected to receive and guarantee Iran’s oil and gas exports. While Iranians are glad that for the first time Europe is not supporting a confrontational US policy towards Iran, there is a growing call among domestic actors for a tougher foreign policy stance.

The EU has frequently reiterated its commitment to the deal and promised to take the necessary steps to preserve it. As part of the plan, the EU has been working out the details of a “Special Purpose Vehicle” (SPV) to facilitate financial transactions and provide export guarantees for trade with Iran. The SPV will act as a new payment mechanism that allows countries to transact with Iran mainly by relying on a barter exchange. According to EU foreign policy chief Federica Mogherini, the SPV will aim to “assist and reassure economic operators pursuing legitimate business with Iran.”

From Tehran’s view, the SPV could potentially become the savior of the nuclear deal. Yet, if not materialized soon, it is very likely that Iran will consider withdrawing from the JCPOA, putting a final end to an already hobbled agreement. In a conversation with Iranian reporters on the sidelines of high-level talks in Brussel, Iranian Deputy Foreign Minister Abbas Araghchi once again warned about the possibility of the collapse of the nuclear agreement if Iran does not receive the economic gains it was promised. Therefore, the EU must act soon if it wants to keep the nuclear agreement alive.

It is no secret that the United States is a much larger and more attractive market for European firms to do business than Iran. This is the reason that European multinational firms such as Total, Siemens, and Peugeot left Iran even before the re-imposition of US sanctions. However, the EU leadership has always insisted that its main interest in the nuclear agreement is regional security and stability, not business opportunities. For Europe, preserving the nuclear agreement with Iran is about preventing another conflict in an already troubled region—a conflict that could flood Europe with a new wave of refugees.

The collapse of the nuclear agreement would put Iran, the US and their regional allies and proxies on a collision path, which would have significant ramifications beyond the Middle East, especially for Europe. If the agreement collapses, Iran might produce higher enriched uranium and expand its regional footprint to strengthen its bargaining position in a post-JCPOA era. Last but not least, prospects for peace talks in Yemen and Syria could become even more challenging.

Moreover, the failure to preserve the Iran deal would significantly undermine the sovereignty of the EU and its ability to enter international agreements independent of the United States. Particularly, after disappointing news about several European countries refusing to host the SPV, the EU needs to unite on this issue and implement it a way that displays its power and autonomy on the international stage.

First and foremost, the EU has the option to set up multiple SPV’s in several European countries instead of pressuring a single country to host the payment system. This would further complicate the scenario for the application of US sanctions. Indeed, there are reports that France and Germany will co-host the mechanism. Secondly, Europe should encourage non-European countries to join the SPV, not only to facilitate trade with Iran but also to strengthen the role of the euro against the US dollar in international trade.

In August, the EU agreed to provide an €18 million package for supporting the Iranian private sector, especially small and medium-sized enterprises (SMEs), environmental projects and addiction reduction programs. The EU must further invest in support packages and collaborate in development projects to help Iran deal with the major challenges it is facing as a result of US sanctions. These investments by the EU will go a long way toward preserving the historic multilateral non-proliferation agreement, preventing further destabilization of the region and protecting EU’s sovereignty.

Bijan Ahmadi is a peace advocate and the founder of the Institute For Peace & Diplomacy. He has been interviewed about Iran’s foreign policy and the Iran nuclear agreement by major media outlets including CBC, The Star, Globe and Mail, iPolitics, BBC Persian, Radio Canada, CTV News. In 2017, in his former role as the President of the Iranian Canadian Congress, he testified at the Canadian Senate Foreign Affairs Committee about the negative impact of sanctions on Iran.

Younes Zangiabadi is the research director at the Iranian Canadian Congress where he organizes policy briefings for Canadian parliamentarians and policymakers focused on Canada’s Iran policy, US-Iran relations, and the nuclear agreement with Iran. He has written for publications including the Huffington Post and Forbes. He is is currently a Masters Candidate at the Graduate Institute of International and Development Studies (IHEID) in Geneva.