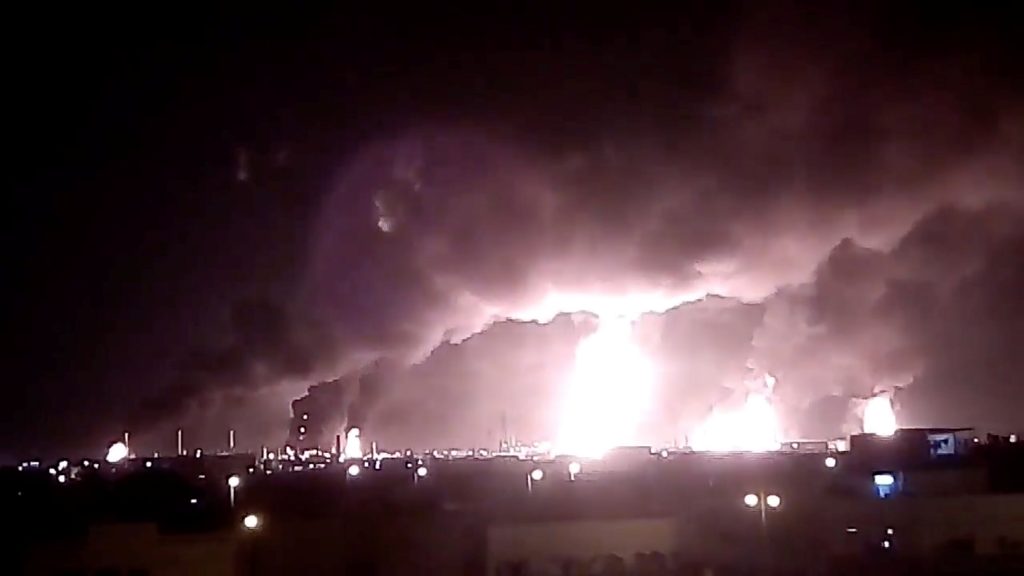 The world remains shocked by the unprecedented attack on major Saudi oil facilities carried out by either Iran or one of its allies, Yemen’s Houthi rebels. Whoever was responsible, it seemed to have crossed one of the unstated red lines that have governed armed conflict in the Middle East and maintained a fragile state resembling peace since the 2006 war between Israel and Lebanon.

In truth, the red lines have been fading to a barely distinguishable pink ever since US President Donald J. Trump announced that the United States would withdraw from the nuclear deal and impose a policy of “maximum pressure” on Iran targeting not just the Islamic Republic but any of the countries doing business with it.

The attack on the Aramco facility illustrated the latest salvo in a dangerous new normal that has come about in the Middle East: a constant widening and deepening of the conflict between an Iranian-led axis and the United States and its allies. Even if a war is avoided—and that is looking increasingly unlikely—the status quo is imperceptibly dragging the region’s economy into the gutter and further deteriorating already fraying quality of life.

In the wake of the Aramco attack, many have forgotten how the Middle East jumped with alarm when Lebanese militant group Hezbollah attacked what it thought was an outpost in northern Israel on September 1 with Kornet anti-tank missiles. Across the Middle East, many worried it would be the beginning of yet another long and protracted war between Israel and one of its regional adversaries.

In that case, Israel responded proportionally, firing rockets into southern Lebanon. There were no reported casualties in the exchange—which featured a comical stunt by Israel using a dummy to fool Hezbollah Secretary General Hassan Nasrallah into believing he had harmed Israeli troops. Israeli Prime Minister Benjamin Netanyahu, at heart a risk-averse leader despite his blustery rhetoric, did not want to chance an unpredictable war that could unleash Hezbollah’s missile arsenal against northern Israel just before crucial September 17 elections.

Across the Middle East, every few days there has been some kind of unprecedented escalation. The Hezbollah attack was in response to an alleged Israeli drone attack in the group’s south Beirut stronghold on August 25, as well as a series of strikes in Syria that killed two Hezbollah operatives. A week after the Kornet attack, Lebanon claimed it downed and captured another Israeli drone over Lebanon on September 9, while Israel insisted the aircraft crashed as a result of a malfunction.

In recent weeks came news that Israel had bombed positions in Iraq controlled by Shia militias close to Iran, an unprecedented move that angered Baghdad officials against US troops inside the country, and even prompted a statement by the Pentagon that it had nothing to do with the attacks.

Israel says it was urgently attempting to rein in an Iranian program to develop precision missiles for Hezbollah and its other non-state allies and proxies, which—as the highly accurate Aramco attack showed— is a game changer for the region.

It now means Hezbollah, Hamas in the Gaza Strip, and the Houthis in Yemen have access to more accurate rockets and drones that can pinpoint Israeli and Saudi strategic assets, including power plants and airports.

Experts are unsurewhat exactly Hezbollah has among the estimated 100,000 rockets and missiles it has in its arsenal. But over the years the rockets possessed by Iran’s allies have gotten more and more accurate and killed, as shown by increasingly damaging attacks on Saudi Arabia by the Houthis.

Reports in recent weeks also surfaced of a US cyberattack targeting Iran, in response to alleged Iranian targeting of oil tankers in the Persian Gulf.

The US Treasury Department sanctioned the Jammal Trust Bank for having a “longstanding relationship” with Iran’s ally Hezbollah, even though the US Embassy in Beirut and USAID partnered with the same institution in a 2018 education initiative.

While Iran placed sanctions and raised the possibility of other action against a US-based think tank, the Foundation for the Defense of Democracies, that Tehran alleges is no fount of ideas but a gray-zone project that has an operational role in designing sanctions against it, prompting accusations that Iran had placed the institution on some kind of hit list.

Trump gratuitously claimed on August 30 that the United States was “not involved” in the satellite failure of an Iranian rocket test.

The posturing and pinprick attacks are leading to the wider, large-scale war that everyone fears—as shown by the drive by some in Washington for a larger scale US response to the Aramco attack.

But even without a war they are damaging the entire region. As predicted by experts, Iran’s economy is no longer in freefall but is in deep trouble thanks to the US sanctions that violated a nuclear deal that was enshrined into international law by a UN Security Council resolution.

But Iraq also remains mired in poverty, unable to pull itself out of the economic malaise of the Islamic State of Iraq and al-Sham (ISIS) war.

Dubai, long considered a model for economic liberalism and prosperity in the region, is suffering financially and scaling back its ambitions, largely as a result of the geo-political machinations of its sister emirate, Abu Dhabi. Lebanon’s economy is hanging on by a thread, strained by the Syrian refugee crisis as well as a lack of investment and commerce. Turkey is in recession. Israel itself is also suffering economically, in part because of regional uncertainty. And the attacks on the Saudi oil facility will likely spook potential investors considering buying into the upcoming Aramco public offering, which the kingdom hopes will help it finance its ambitious development goals.

The aggressive stance of the administration of Donald Trump against Tehran and its bid to recruit allies to enforce its policy of “maximum pressure” is damaging the Iranian economy. But the repercussions and uncertainty created by the policy are also badly hurting US allies.

Image: Fires burn in the distance after a drone strike on Aramco's oil processing facilities in Saudi Arabia on September 14, 2019 (Reuters)