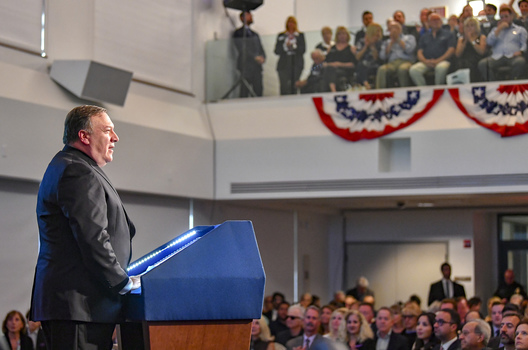 Among the oddest features of Secretary of State Mike Pompeo’s address at the Reagan Library on July 22 — billed as “Supporting Iranian Voices” – was the absence of any actual Iranian on the dias.

Pompeo was introduced by Fred Ryan, chairman of the board of the Reagan Foundation, and by Sen. Tom Cotton, a hawkish Republican from Arkansas. At the end, there was a brief question and answer session with former California governor Pete Wilson. In the front rows in the audience was a similarly non-ethnic crowd.

Normally, at such gatherings, a prominent Iranian American would have said a few words in gratitude for the administration’s expression of support for the democratic aspirations of the Iranian people. But the Trump administration’s policies – unilaterally quitting the Iran nuclear deal and re-imposing draconian sanctions while making it almost impossible for most Iranians to visit the United States – have put the many Iranians who oppose the Tehran government in an awkward position.

Some major groups, such as the National Iranian American Council (NIAC), boycotted the speech. Others, such as the Public Affairs Alliance of Iranian Americans (PAAIA), sent a few representatives but kept a low profile. On Twitter, some of the biggest boosters of Pompeo’s remarks came from non-Iranian neoconservatives who have worked to destroy the Iran nuclear deal and to exert “maximum pressure” on Iran, not so much because of its human rights abuses as because of its regional military interventions and support for groups that oppose Israel.

In his remarks, Pompeo used many of the arguments presented by groups such as the Foundation for the Defense of Democracies, which closely follows the line of Israeli Prime Minister Benjamin Netanyahu. Like Netanyahu, Pompeo said the current president of Iran, Hassan Rouhani, and his foreign minister, Javad Zarif, were not “moderates” but “wolves in sheep’s clothing.”

Pompeo likened the Iranian government to a “mafia” enterprise and accused senior Iranian officials, including the head of the judiciary, Sadegh Larijani, of stealing millions of dollars while ordinary Iranians struggle. The Supreme Leader of Iran, Ayatollah Ali Khamenei, “has his own personal, off-the-books hedge fund called the Setad, worth $95 billion,” Pompeo said. Khamenei’s foundation, which pays no taxes, supports many of the activities of Iran’s Islamic Revolutionary Guard Corps.

Few would disagree with Pompeo’s harsh criticism of Iran’s entrenched corruption and human rights abuses. But US policies are likely to bolster the most repressive elements of the Iranian regime – who have access to hard currency – and inflict the most suffering on ordinary people about whom the Trump administration purports to care. Pompeo asserted that it was the Iranian government’s mismanagement that has led the Iranian currency to lose much of its value. In fact, the rial has plummeted since Donald Trump was elected because of his threats to leave the Joint Comprehensive Plan of Action (JCPOA), which he finally did on May 8.

The Trump administration is now sending diplomats around the globe trying to convince importers of Iranian oil to reduce their purchases to zero by Nov. 4. While sanctions are unlikely to be as effective now as they were in 2012-2014, when the US was leading an international consensus in support of negotiating the JCPOA, they will certainly bring pain to Iranians – and US consumers.

The other part of the administration’s policy is to step up an information war on the Iranian government. Pompeo, who has been tweeting harsh remarks about Iran since he came to office, said that the US would be expanding its Farsi-language broadcasting to Iran to a 24/7 enterprise.

But while Bush was sincere if tragically inept in seeking to export democracy to the Middle East, the Trump administration has shown little concern for human rights in many countries that are equally if not more repressive than the Islamic Republic.

Only a week earlier, President Trump publicly showered praise on Vladimir Putin, whose government is certainly a “kleptocracy” as egregious as Iran’s, who is responsible for assassinating opponents, propping up the brutal regime of Syrian President Bashar al-Assad and intervening in US elections. Trump has also had kind words for Kim Jong-un, leader of a regime that incarcerates tens of thousands of opponents, uses hunger as a weapon and executed Kim’s uncle and a half-brother. Trump has little to show for his Singapore summit with Kim, at which he made only vague promises of  “denuclearizing the Korean peninsula.”

The JCPOA, in contrast, provided a detailed technical roadmap to prevent Iran from developing nuclear weapons in the first place in return for sanctions relief. This agreement is now in jeopardy, thanks to the United States, with little prospect of negotiating a replacement.

As so often since the Trump administration came to power, the president himself stepped on his own policy with an unhinged late-night tweet. Responding to comments by Rouhani warning the US not to attack Iran, Trump tweeted in all-caps: NEVER, EVER THREATEN THE UNITED STATES AGAIN OR YOU WILL SUFFER CONSEQUENCES THE LIKES OF WHICH FEW THROUGHOUT HISTORY HAVE EVER SUFFERED BEFORE.”

Many Iranians would welcome a change in their government but not at the price of another bloody revolution or ruinous war. Few would trust the Trump administration to be the agent of that change.