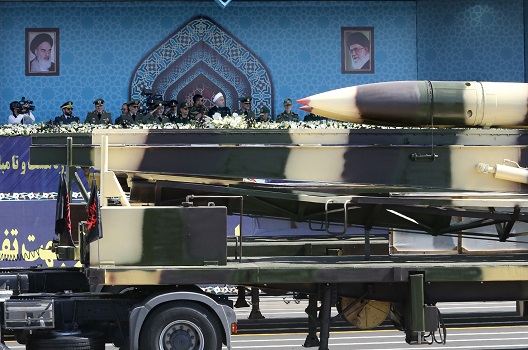 The Trump administration has been ratcheting up pressure on its European allies to agree to unspecified new measures against Iran’s ballistic missile program as the price for conserving the Joint Comprehensive Plan of Action (JCPOA).

The US, referring to United Nations Security Council Resolution 2231, which codified the 2015 nuclear deal, has repeatedly called on Iran to refrain from testing ballistic missiles and dramatized what it says is evidence of the transfer of Iranian rockets to Yemen in violation of the resolution. Iran has rebuffed the US demands, arguing that its missile program is for defensive purposes and noting that the UN resolution is not binding with regard to testing. European countries have been consulting with both the US and Iran but remain unsure what the Trump administration wants and are fearful of being asked to make continual new demands on Iran to preserve the JCPOA.

A Shia Persian state in the midst of Sunni Arab and Turkic countries, Iran is ethnically and religiously at odds with most of its neighbors. From a geopolitical standpoint, Iran faces the Gulf Cooperation Council alliance to the south and two nuclear weapons states – Pakistan and Israel – in close proximity. Turkey, a member of NATO, is also a neighbor and the United States maintains a large military presence in the region at bases in Kuwait and Qatar. Iran, however, is not a member of any formal security alliance and suffers from an acute sense of insecurity and victimization.

Iran, as the result of a decades-long conventional arms embargo, has also been unable to acquire modern conventional arms and has had to rely on antiquated equipment largely purchased prior to the 1979 revolution. Iran’s most modern fighter aircraft, the Russian-made MIG-29A Fulcrum, entered service in the early 1990s.

In 2020, Iran is theoretically allowed to purchase weapons from abroad under the JCPOA. However, Michael Elleman, a missile expert at the International Institute for Strategic Studies (IISS), told a panel on Iran missiles Tuesday at the Atlantic Council that Iran lacks sufficient funds to buy a new air force. “Iran is going to rely on ballistic missiles for the foreseeable future,” Elleman said. “This is their way of war.”

On the other side of the Persian Gulf, Saudi Arabia is one of the largest importers of modern military equipment from the United States and United Kingdom. According to the IISS, the Saudi  defense budget in 2017 stood at $76.7 billion, the third largest in the world after the US and China. Iran’s defense budget, in contrast, stands at approximately $14 billion.

Iran has been working to upgrade its ballistic missiles since the latter years of Iran-Iraq war. Its current inventory of Short Range Ballistic Missiles (SRBM) and Intermediate Ballistic Missiles (IRBM) is the largest in the region, and is seen by Tehran as a deterrence measure capable of retaliating against regional threats by targeting population centers.

While these missiles can be used to target large cities, they have limited utility against small targets, due to their lack of accuracy. Iranian officials have stated repeatedly that they intend to limit the range of their missiles to 2000 kilometers and focus on improving their arsenal’s accuracy.

The bitter history of the Iran-Iraq war lingers in Iran’s political psyche and its missile policies. During that bloody conflict, Iraq rained ballistic missiles on Tehran and other Iranian targets in the so-called “war of the cities.” Iran retaliated with old Soviet technology missiles purchased from China and North Korea.

Many of Iran’s current officials are veterans of the Iran-Iraq war and remember the horror of the missiles and of Iraq’s use of chemical weapons on Iranian troops – as well as the international community’s subsequent decision not to punish Iraq’s flagrant violation of international law. In the words of Iran’s Deputy Foreign Minister Abbas Araghchi, “We still remember the French Super Etendards (fighter jets), British Chieftain tanks, German chemical weapons, US AWACS planes and Saudi dollars… [used by Iraq during the war] our missile program is defensive.”

Washington’s concerns over Iran’s missile program are legitimate, but so are Iran’s concerns for its security. Diplomacy requires forgoing maximalist aspirations and a willingness to reach a compromise that serves the interests of all parties.

In negotiating with Iran, the US should refrain from making demands that could be perceived by Iranians as “capitulation” to foreign powers. Iran is capable of rational cost-benefit analysis, but increasing pressure may only ignite Persian nationalism.

The successful implementation of the JCPOA indicates that Iran and US can resolve disputes through diplomacy. However, Washington’s efforts to deprive Iran of the benefits of the nuclear deal, will certainly impact Iran’s decision to negotiate over its missile program. As a well-known Persian saying goes, “First, prove your kinship, then claim your inheritance.” This would mean that Washington should commit to fully implement the JCPOA and not threaten to walk away from the agreement in the absence of additional accords.

To address Iran’s missile program, Iran and the US – in conjunction with the Europeans — could agree on a moratorium on missile testing, in return for economic or other incentives. Since Tehran already has said that it is not planning to increase the range of its missiles beyond 2000 kilometers, an agreement on this issue could also be part of a new understanding. In the meantime, Iran should refrain from making provocative statements – against Israel, for example — that needlessly antagonize US allies and run counter to Iran’s own interests.

Sina Azodi is a PhD student in Political Science and a Graduate Researcher at University of South Florida’s Center for Strategic and Diplomatic Studies. He previously worked as a Research Assistant at the Woodrow Wilson International Center for Scholars and National Security Archive. He received his BA & MA from Elliott School of International Affairs, George Washington University. He focuses on Iran’s foreign policy and US-Iran relations. Follow him on Twitter @azodiac83