This article is part of a strategic collaboration launched by the Atlantic Council (Washington, DC), the Emirates Policy Center (Abu Dhabi), and the Institute for National Security Studies (Tel Aviv). The authors are associated with the initiative’s Working Group on Chinese and Russian Power Projection in the Middle East. The views expressed by the authors are theirs and not their institutions’.

On September 17, at the Shanghai Cooperation Organization’s (SCO) summit in Dushanbe, the Russian and Chinese-led bloc agreed to move forward on Iran’s application for membership. The decision to extend membership to Tehran—the culmination of more than a decade of setbacks—reflects the burgeoning ties between Iran and Russia.

As part of Iran’s emphasis on ties to the East—a policy that has received extra impetus amid stalled talks over the revival of the 2015 nuclear accord—the country’s involvement in the SCO is tied to its goal of deepening and institutionalizing its relations with China and Russia. Whereas Iran’s relationship with China has received much attention in the context of the SCO, the significance of the organization for Russia-Iran relations remains understudied.

Within the SCO, Russia has oscillated between adopting an ambiguous position on Iranian membership and serving as Iran’s most prominent advocate. With Moscow holding the rotating presidency of the SCO at the 2009 summit, Iran anticipated an upgrade from its observer status to admission as a full member. However, Russia was dissuaded from including Tehran’s membership application as an agenda item during the summit.

Moscow would have suffered greater reputational costs from closer association with Tehran, particularly due to the latter’s brutal crackdown on protesters during the 2009 post-election protests known as the Green Movement and then-President Mahmoud Ahmadinejad’s confrontations with the West over its controversial nuclear program. It also came at a time when Russia’s foreign policy priority was to reset its relations with Washington. In 2010, the SCO introduced a new criterion for membership that excluded aspiring member states under sanctions by the United Nations Security Council (UNSC). The fact that several days prior to the 2010 summit both Russia and China supported UNSC Resolution 1929, which imposed crippling economic sanctions on Iran, suggests that it was a move directed at Tehran and allegedly supported by Russia with an eye on improving US-Russia relations.

Fast forward to 2015 and the Joint Comprehensive Plan of Action (JCPOA) resulted in the easing of multilateral sanctions on Iran. Russia expressed readiness to admit Iran into the SCO following the process of admission of India and Pakistan. Whereas the procedural challenges of membership expansion to India and Pakistan may have slowed the process, Tajikistan’s staunch opposition to Iranian membership constituted the primary roadblock after the signing of the JCPOA.

At the organization’s 2016 Tashkent summit, despite the removal of UNSC sanctions, Iran’s membership was not even discussed, and Iranian media reported that then-Foreign Minister Mohammad Javad Zarif left the summit in protest. A statement from an anonymous Russian diplomat at the time revealed that Tajikistan had objected to Iranian membership due to bilateral frictions. These included accusations that Tehran was supporting the activities of the banned Islamic Renaissance Party of Tajikistan, as well as claims by Tehran that Dushanbe had stolen over $2 billion held in Tajik banks by an Iranian businessman arrested in 2013.Russia, which enjoys close ties to Dushanbe and Tehran, presumably served as the intermediary between the two countries, culminating in the thaw in ties.

Just months after the Donald Trump administration withdrew from the JCPOA in 2018, former President Hassan Rouhani praised Russia’s support for Iran’s membership in the SCO during a meeting with President Vladimir Putin on the sidelines of the SCO Summit in Qingdao in June 2018.

Iran has also been part of Russia’s ambitious greater Eurasia project, a vague and underdeveloped framework to foster geopolitical and economic integration across the region.   Putin’s virtual speech at the September SCO summit indicated that “Russia supports the decision to start Iran’s SCO membership process” due to its prior contribution to the organization and role as a pivotal actor in Eurasia, adding that “Iran’s SCO accession will undoubtedly contribute to enhancing the organization’s international authority.” Beyond Russia’s aspirational integration efforts, Moscow has viewed Iran as an important player in regional security.

At the regional level, Russia has traditionally viewed Iran as a stabilizing force against common challenges and threats, such as drug trafficking, terrorism, and transnational crime. Around 2007, the SCO started allowing observer states to partake in ministerial meetings, working groups, and its core body, the Regional Anti-Terrorist Structure, which allowed Iran to engage in limited information sharing in some of the aforementioned areas: drug trafficking, extremism, and terrorism. Both Russian and SCO efforts to mediate in Afghanistan have frequently emphasized the importance of including regional actors in the process, though Russian-led mediation lost momentum following the modest results of the 2009 SCO conference on Afghanistan.

This changed with the Taliban’s second takeover of Afghanistan in mid-August and the rise of the Islamic State of Iraq and al-Sham-Khorasan, which precipitated greater involvement by Iran, Russia, and the SCO in the stabilization of Afghanistan. For example, in late 2016, Tehran and Moscow began hosting talks with the Taliban while, in 2017, the SCO moved to revive the SCO-Afghanistan Contact Group (originally established in 2005 to offer a parallel discussion format for Afghanistan with member states and observers but disbanded in 2009). In Russia’s eyes, Afghanistan has strengthened the case for making Iran a full SCO member and also underlined the need to engage with Tehran under the quadrilateral Russian-Chinese-Pakistan-US talks.

Iran’s ascension and the China factor

In August, Iran’s Supreme National Security Council secretary Ali Shamkhani confirmed that “political obstacles” to join as a member state had been resolved following a conversation with his Russian counterpart Nikolai Patrushev. An envoy of President Putin confirmed this to the SCO prior to the September summit. Although Putin could not attend the summit due to self-isolation after being exposed to COVID-19 in his inner circle, he congratulated his Iranian counterpart Ebrahim Raisi in a telephone call. Russia has since coordinated with Tehran to ratify relevant documents on which Iran’s full accession remains contingent, most recently on October 5, when Iranian Foreign Minister Hossein Amirabdollahian traveled to Moscow to meet with his Russian counterpart.

In all likelihood, Iran’s membership in the SCO provides Russia with the institutional platform to keep tabs on China’s deepening relations with Iran. From Russia’s perspective, the signing of the twenty-five-year Sino-Iranian cooperation agreement in March 2021—even though its substance is less impressive than its optics—is a stark contrast to the uncertainties surrounding the renewal of its long-term agreement with Iran that expired in March.

That Russia includes “the China factor” into its decision-making is not unusual. For example, Moscow has been unreceptive to Beijing’s attempts to include an economic dimension to the SCO due to concerns that this would pose a challenge to the Moscow-led Eurasian Economic Union (EAEU), which includes all of the SCO’s founding members except China. It is also arguable that Moscow pushed for India’s membership in the SCO in 2017 to dilute what it saw as China’s increasing influence within the organization, particularly vis-à-vis the Central Asian states.

Forward to a multipolar world order?

Iran’s membership represents a diplomatic triumph for Tehran and for the country’s new hardline President Raisi, whose visit to Dushanbe was his first trip abroad as president. Given Iran’s previous trilateral naval drills reportedly held with China and Russia in 2019 and 2020 and a forthcoming one later this year, its alleged involvement in attacks on shipping and oil tankers and facilities in the Persian Gulf, and Iran’s interim free trade agreement with the EAEU—the only one with a Middle Eastern country—Iran’s recent higher profile in the region generates understandable nervousness among the Arab states in the Persian Gulf.

However, Russia does not appear to be tilting away from the Arab states and towards Iran. Less than a month before the Dushanbe summit, Russia inked a military cooperation agreement with Saudi Arabia in Moscow and welcomed the United Arab Emirates (UAE)—along with Uruguay and Bangladesh—as a member of the BRICS’ New Development Bank.

Since the start of 2021, Moscow has also been the recipient of significant investments in the power, real estate, and retail sectors from the UAE and Qatar, respectively. In June, Qatar was also feted as a guest country at Russia’s St. Petersburg International Economic Forum—often dubbed the Russian Davos. Additionally, the SCO summit was quick to approve three new dialogue partners—Egypt, Saudi Arabia, and Qatar—that could temper Iran’s influence at the SCO. Thus, Moscow’s tried and tested playbook in the Middle East, whereby opposing sides are simultaneously supported, continues to be relevant.

Bearing in mind Russia’s vacillating position about Iran’s SCO membership to avoid inevitable narratives of the group as an anti-West “triple axis” or “axis of weevils,” Moscow’s support at the recent Dushanbe summit may imply it has finally accepted the cold peace in US-Russian relations, which are at their “lowest possible point” since the Cold War. The Kremlin’s pessimism would be in line with Russia’s recently released National Security Strategy.

Unlike its previous iteration of 2015, for example, the new document omits any references to aspirations of an all-encompassing strategic partnership with the US or Europe. Moscow’s agreement to launch negotiations with Iran to upgrade the interim EAEU-Iran free trade agreement, covering 50 percent of traded goods to a permanent free trade zone, is consistent with this line of thinking.

Russia and Iran’s acrimonious relationship with the United States has brought the countries closer together. Moscow and Tehran tend to view the SCO as an indication of the burgeoning multipolar order. Russia’s backing of Iranian membership has been connected to Moscow’s desires to fold a formidable regional power into the organization. Iran in the SCO furthers Russian goals of projecting the organization as a Eurasian powerhouse and is perhaps an indication of the coming days of Russian and Chinese leadership of a non-Western international order.

Li-Chen Sim is an Assistant Professor at Khalifa University in the United Arab Emirates and a non-resident scholar at the Middle East Institute in the U.S.

Nicole Grajewski is an international security fellow at the Belfer Center for Science and International Affairs in Harvard’s Kennedy School and a doctoral candidate in international relations at the University of Oxford. 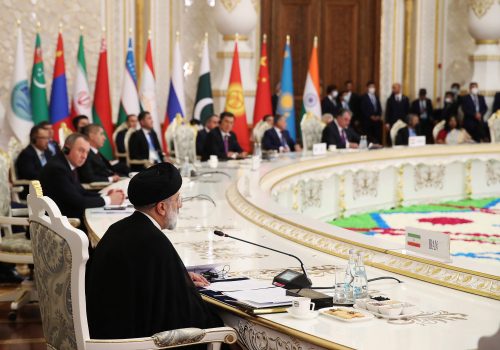 With the US out of Afghanistan, Iran jumps on the opportunity of joining the Shanghai Cooperation Organization

Even if Iran’s full membership in the Shanghai Cooperation Organization is stalled, the US exit from Afghanistan changes the regional landscape. 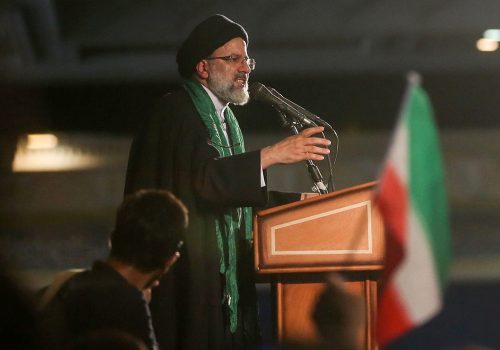 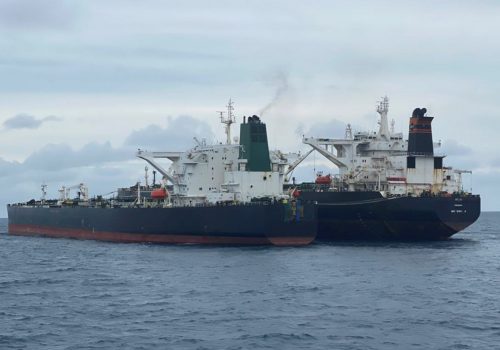 As long as China’s petroyuan provides a means to avoid US sanctions, Iran will keep loading tankers with crude and sending them eastward.