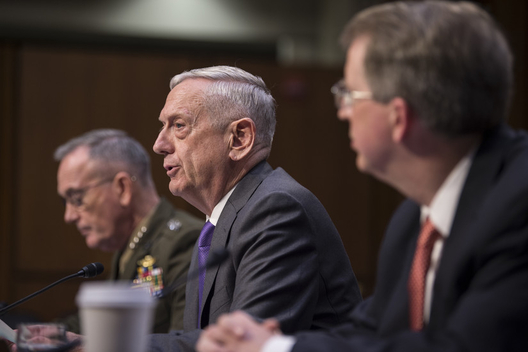 The speeded up departure of Defense Secretary James Mattis did not come as a surprise after President Donald Trump’s decision to withdraw US troops from Syria—and Mattis’ stinging letter of resignation. The Syria announcement was the final blow to a relationship that had become strained over issues ranging from the importance of alliances to the politically motivated deployment of US troops at the border with Mexico.

The retired Marine general had policy differences with the president about Iran as well. While a supporter of containment, Mattis advocated remaining within the Joint Comprehensive Plan of Action (JCPOA). His departure tilts the balance in Trump’s national security team in favor of more hawkish individuals who have openly advocated regime change as the ultimate solution to US differences with the Islamic Republic.

Mattis is certainly no softie when it comes to Iran. Quite the contrary, he has long held a “grudge” against the Islamic Republic dating to the 1983 bombing of the US Marine barracks in Beirut by Iran-backed Lebanese militants. In 2010, as the newly appointed commander of US Central Command (Centcom) and after years spent fighting Iranian proxies in Iraq, Mattis noted to then President Barack Obama his three top priorities in the Middle East: “Number one Iran. Number two Iran. Number three Iran.” It was this Iran obsession that led Obama to replace Mattis as Centcom commander in 2013, when the focus of US policy was on negotiating a nuclear accord with Tehran.

In 2016, after he had retired from the military, Mattis called Iran a “revolutionary cause devoted to mayhem.” But as Trump’s defense secretary, he seemingly moderated his position and acknowledged the risks of US military action against Iran. Mattis also contradicted the president’s harsh critique of the JCPOA, calling it a “pretty robust and intrusive” agreement. While it is not entirely clear what might have contributed to Mattis’ shift, Trump’s lack of experience and impulsiveness may have convinced the retired general that he needed to act as a check on the president’s worst instincts on Iran as well as on other matters. After all, those who have been to war are usually less inclined to go to war again.

While the news of the US withdrawal from Syria initially appeared to be good news for Tehran, undercutting the stated US policy of containment, Mattis’ departure is not an unqualified victory for Tehran. Left atop Trump’s national security team is national security adviser, John Bolton, a so-called “offensive realist” who has long pushed for bombing Iran’s nuclear facilities. Bolton also distrusts multilateral agreements and has close ties with the Mujahedin-e Khalq or MEK, an Iranian opposition group that was until 2012 listed as a terrorist organization by the State Department.

The other survivor so far of Trump’s reality show administration is Secretary of State Mike Pompeo. A self-described “counterpuncher,” Pompeo, who replaced the more moderate and less Iran-phobic Rex Tillerson, has also suggested in the past that US should consider attacking Iran’s nuclear facilities.

The former Kansas republican congressman, who was once denied a visa to “monitor” Iranian parliamentary elections in February 2016, was a prominent critic of the Obama administration’s diplomatic engagement of Iran, calling the nuclear agreement “surrender” and not a policy. As secretary of state, Pompeo has executed a policy of extreme rhetorical and economic pressure on Iran including a spotlight on Iranian human rights abuses and corruption and has openly cheered on Iranians protesting over economic, social and political grievances.

Pompeo, similar to Bolton, believes that the United States should either “dominate or shun” other nations and that America’s adversaries are “wicked” and that US should not accommodate their interests. This worldview is potentially extremely dangerous in the case of Iran because it mirrors the ideological discourse of some Iranian officials who see the US as the “Great Satan.” Coupled with the absence of high-level channels of communication between the two governments—which existed under the Obama administration in the lead-up to the JCPOA and afterwards—such mutually extreme and antagonistic perspectives are a prescription for confrontation.

With Mattis’ departure on December 31, Trump is likely to choose a replacement that shares his hostile view of Iran. In the meantime, the president has appointed Deputy Secretary of Defense Patrick Shanahan as the acting secretary of defense. A former Boeing executive with scant policy background, Shanahan holds views on Iran that are not entirely clear. But his company has made billions of dollars off arms sales to Iran’s Arab adversaries. Given Trump’s tendency to oust any voices of opposition, Shanahan—if nominated to replace Mattis—would likely embrace the president’s aggressive Iran policy, or experience the fate of other independents and be forced out.

Republican Senator Tom Cotton of Arkansas, another contender to lead the Pentagon, shares Pompeo’s ideological views and has long established himself as a prominent Iran hawk. Along with forty-six other senators, Cotton in March 2015 wrote a letter to Ayatollah Ali Khamenei warning Iran’s Supreme Leader not to negotiate with the United States. Cotton then led a campaign to try to torpedo the JCPOA. Like Bolton, Cotton has openly called for regime change in Iran. Cotton also supports a continued robust US military presence in Syria as do a majority of US Iran hawks. But his political ambitions may lead him to underplay his opposition to Trump on Syria in return for a cabinet office.

A Bolton-Pompeo-Cotton “axis,” supervised by a president who has threatened Iran with military action would be an ominous signal to Tehran. While Trump’s decision to quit Syria might reduce the chances for an accidental clash between Iranians and Iran-backed forces and US troops in the Syrian theater—and Trump is also pulling forces from Afghanistan—the withdrawals might allow the administration to shift its attention even more toward Iran. The US may also see a need to reassure Israel, Saudi Arabia and the United Arab Emirates that quitting Syria does not mean abandoning them to Iranian expansionism. On a quick trip to Iraq on December 26 to greet US troops, Trump made clear that the US would keep several thousand servicemen and women in that country for the time being to deal with any contingencies.

Former British Prime Minister Winston Churchill is famously quoted as saying “jaw-jaw is better than war-war.” However, the departure of a cerebral general fond of Marcus Aurelius’ Meditations could further push the Trump administration toward “war-war.” That is especially a concern as Trump faces the second half of his first presidential term contending with new economic, political and legal challenges.

Sina Azodi is a PhD student in Political Science and a graduate researcher at University of South Florida’s Center for Strategic and Diplomatic Studies. He focuses on Iran’s foreign policy and US-Iran relations. Follow him on Twitter: @azodiac83.

Barbara Slavin directs the Future of Iran Initiative at the Atlantic Council. Follow her on Twitter: @BarbaraSlavin1.