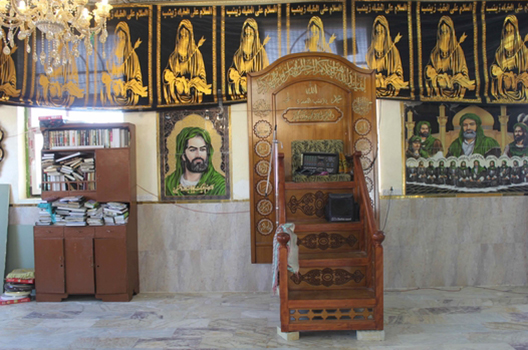 In the northern Iraqi city of Sinjar, a large sign outside the Sayyida Zaynab shrine boasts of how an Iran-backed paramilitary group returned it from the rubble.

“With God’s blessing: the engineering and construction personnel from Brigade 40—the Imam Ali Brigades—have undertaken the reconstruction of Sayyida Zaynab the Younger’s shrine in Nineweh Governorate, Sinjar district, after the Islamic State of Iraq and al-Sham (ISIS), the enemies of religion and doctrine, destroyed it” reads the green sign, emblazoned with the brigade’s logo.

The Imam Ali Brigades are one of around sixty Shia-majority paramilitary groups operating under the Iraqi Popular Mobilization Forces (PMF) umbrella, a state-sponsored organization that played a significant role in ousting ISIS from Iraq.

But many of the brigades, including Imam Ali, align themselves with Iran. Formed in 2014, the group has taken part in battles against ISIS in Iraq’s western Saladdin province, but has also deployed to Syria as part of Iran-led offensives.

The US Treasury Department designated Imam Ali’s Secretary General Shibl al-Zaydi as a Specially Designated Global Terrorist in November 2018 for acting as a “financial coordinator” between the Islamic Revolutionary Guard Corps Quds Force (IRGC-QF) and “sectarian armed groups in Iraq” and for helping “to facilitate Iraqi investments on behalf of IRGC-QF Commander Qassem Soleimani.” He is also thought to have close ties with the Lebanese militant group, Hezbollah, an Iranian proxy.

In response, the Imam Ali Brigades published threats to the United States: “The only language to use with them is that of the field and arms… to teach America and its stooges, we and Hezbollah have one body, one project, one goal, and that is the creation of a state of divine justice.”

Sinjar city, with a once-mixed population of Sunni and Shia Muslims, Yazidis and Christians, now stands almost empty, with many buildings damaged or totally pancaked. Only 25,200 people of its former 96,000-strong population have returned, according to statistics from the Norwegian Refugee Council, which works in the area.

Even as homes and businesses lay in ruins, work began on repairing the Sayyida Zaynab shrine nearly as soon as Sinjar was retaken from ISIS in November 2015. The site houses the daughter of Imam al-Sajjad, the fourth Imam revered in Shia Islam.

Living in the shrine, mausoleum official Sayyed Amir Ayyoub al-Husseini belongs to the tribe responsible for its upkeep. He fled in August 2014 as ISIS approached Sinjar, and then returned with PMF units some 18 months later as the city was recovered.

“The mausoleum was completely destroyed, but grace to God, as you can see, we have rebuilt it bigger, and better than before,” he says enthusiastically.

So far, $35,000 from private donations has been spent on the reconstruction and the site now employees thirty people—cleaners, aides for pilgrims and the like—whose salaries are paid by Iraq’s Shia Endowments Office. There are further plans to build minarets, gardens, and to carry out upgrades to the surrounding roads and pavements.

The shrine appears a carbon copy of others with links to Iran across the region, such as the Hezbollah-guarded Sayyida Khawla shrine in Baalbek, Lebanon.

The shrine’s lavish interiors and gleaming golden dome preside over the scenes of destruction below it. The gulf between them is not subtle.

Al-Husseini acknowledged the contrast but said pilgrims still came from as far away as Basra, a Shia-majority city over 1,000 km away in southern Iraq.

“As you can see, families come here,” he said, gesturing at children scampering across the shrine’s marble floor on a sunny Saturday afternoon. “Grace to God, it was so crowded yesterday.”

Not everyone feels so positive.

Sinjar’s former residents feel “so worried,” about the shrine reconstruction and the message it sends about the splintered security forces’ priorities, according to a local activist.

“There are sixty-eight Yazidi religious shrines and temples exploded during ISIS’ attacks, and they haven’t been rebuilt,” said Falah Hasan Issa. “There was only one Shia shrine, and they reconstructed it.”

The Imam Ali Brigades are just one of a multitude of security forces now operating in Sinjar. There is also the Wa’ad Allah Brigades, a PMF faction affiliated to the Fadhilah political party, whose roots are in Basra; then there are the Kurdistan Workers’ Party (PKK) and Peshmerga. The mix mirrors political divisions in the area: control of Sinjar is disputed between Iraq’s federal government and the Kurdistan Regional Government (KRG).

The reconstruction is a sign of soft power deployed by groups like the Imam Ali Brigades. Like other PMF paramilitaries, it described fighting ISIS as a “sacred defense.”

It publishes images showing religious iconography, and rebuilding a place of pilgrimage in Sinjar is the physical manifestation of those virtual messages. Through reconstruction of holy sites and surrounding infrastructure, the group can continue justifying its presence in northern Iraq. Through participating in engineering work and security duties such as checkpoint management, it can gain a foothold in a strategic location. Sinjar is geographically important, some 200km from Turkey and lying on the main route between Mosul and Syria, where Imam Ali has previously deployed troops—and advertised that fact.

What’s more, if the group’s role in reconstruction spreads beyond the shrine to working on housing and businesses, it may allow them to build goodwill among communities that feel abandoned by traditional state apparati, from federal Iraq or the KRG.

This won popular support for Hezbollah and Iran, while creating an “Islamic milieu” peppered with politico-religious attractions. For example, the Lebanese border town of Maroun al-Ras was largely destroyed in 2006 but was rebuiltwith an “Iranian garden,” complete with a model Dome of the Rock that deliberately looms over neighboring Israel. While it would be unwise to overplay the Iranian influence in Sinjar by way of the PMF—there hasn’t been a dramatic takeover by the Islamic Republic here—shrine reconstruction by Iran-aligned groups indicates a similar strategy.

At the moment, though, Sinjar lies in ruins. Rebuilding the shrine sends a clear message from the Imam Ali Brigades: we are present and working to reconstruct sectarian identities while claim a stake in the “victory” over ISIS. Yet that victory has come at a price for most of Sinjar’s ordinary residents, who remain displaced across Iraq or who have fled the country entirely. Given that their homes and lives have been destroyed, the presence of a new shrine will likely provide little comfort.