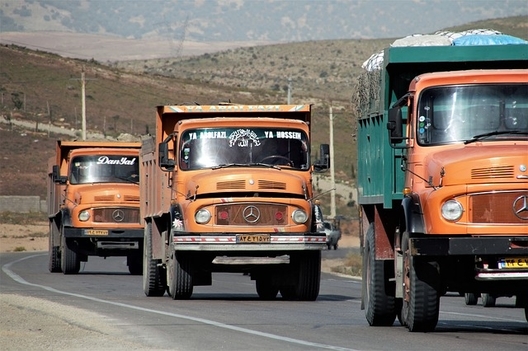 A female truck driver in a burgundy headscarf stood on the side of a highway to Mashhad, explaining in a video sent to Voice of America Persian that she was joining a truck driver strike. It wasn’t long before the video and others like it caught the attention of the International Transport Workers’ Federation (ITF). ITF posted a statement on its Twitter account saying it stood in solidarity “with the truck drivers across Iran who are on strike calling for better pay, lower fees, basic workers’ rights, and safer roads.”

Social media has played an important role in spreading images and footage of the striking drivers as they parked their trucks in port cities and the Esfahan and Kermanshah provinces. Since the truck drivers’ strike commenced on May 22, drivers have heavily relied on social media platforms accessed through circumvention tools to get the word out, including the now-banned messaging app Telegram. Thanks to coverage of the strike, which reportedly now includes gasoline tanker and taxi drivers in some cities, the Teamsters—the largest labor union in the world—also threw their support behind the strikers.

The Iranian government has yet to offer a solution for this growing protest. But in the wake of the December-January Iran protests—over the state of the economy, corruption, and general disenchantment with the government—many wonder if such protests will become widescale if the legitimate grievances of the Iranian people are not addressed, especially in the wake of the US reimplementing staunch sanctions.

Rather than focus on the protesters’ grievances, hardliner members of parliament faulted the West and messaging apps like Telegram for perpetrating nationwide unrest—the most geographically widespread protests since 1979. This prompted the judiciary to rule on April 30 that Telegram—which over half of Iran’s population of 80 million uses—be blocked and replaced with domestically-made apps, despite objections from the Rouhani administration.

Though the Supreme Leader’s Telegram channel transitioned to the domestic apps, most channels run by other Iranian government echelons continue to function, including those of the Islamic Revolutionary Guard Corps (IRGC), former president Mahmoud Ahmadinejad, and reformist parliamentary faction leader Mohammad Reza Aref.

Telegram users weren’t keen on making a transition, either. Although state media boasted seven million Iranians joined Soroush, a domestically-produced app, many on social media complained about slow upload speeds—likely a purposeful government measure to control the flow of images and videos from protests—while others joked and warned of government surveillance. For now, it seems Iranians won’t abandon Telegram. Instead, they rely heavily on circumvention tools like anti-filtering software and Virtual Private Networks (VPNs) to navigate the ‘electric curtain’ of censorship, which bans news and social media websites like Facebook, Twitter, and YouTube.

Some technology experts in the Iranian diaspora have also developed ways to help the Iranian people get around inconvenient censorship. The independent technology and research organization known as ASL19 has an online app store known as Paskoocheh, Persian for “alley way,” that provides Iranians easy access to circumvention and privacy tools. While NetFreedom Pioneers, a firm that focuses on promoting freedom of information, has developed Toosheh, Persian for “knapsack,” through which Iranians can access free, unfiltered web content that only requires a satellite dish and downloading the app off its website. During the height of the Iran protests, Toosheh was downloaded over one-hundred thousand times inside the country.

Two Iranian information technology experts developed a modified version of Telegram called TeleDR or “Telegram Digital Resistance,” with its own built-in proxy. Since its inception in May, TeleDR has [RB1] had over one million downloads within Iran. Although that number isn’t large compared to the 56 million internet users in in Iran, it reflects growing demand among Iranians to stay connected to the online community. This may seem like progress in combatting government-imposed censorship, but it’s proving insufficient.

In recent weeks, the Supreme Council of Cyberspace issued an order to the Ministry of Information and Communications Technology to start blocking circumvention tools, citing a plot by the United States to overthrow the Iranian government. To complicate matters, long before US withdrawal from the Joint Comprehensive Plan of Action, sanctions were already hurting the Iranian people in the tech realm. Apple’s App Store and the Google Play Store pulled Iranian-developed apps, and prevented Iranian access to online services such as Adobe, Android Developer, Dropbox, and PayPal. Despite reports the Trump administration had discussed allowing the “free flow of information in Iran,” tech companies remain reluctant to make their Western products accessible to Iranians for fear of violating sanctions.

Now, with US plans for the “strongest sanctions in history” to stifle Iran’s economy and arguably push more Iranians into the streets, we are likely to see added incentive for the Iranian government to crackdown on cyberspace to crush dissent and the dissemination of information.

The goal of policymakers and internet freedom advocates should not only be to remove sanctions related to technology, but also to get ahead of the censorship curve and have protocols in place if and when the domestic internet does happen. Without the right tools and protocols, we will only hurt the Iranian people’s chances of connecting to each other and the world.

Holly Dagres is an Iranian-American analyst on Middle East affairs. She specializes on Iran. She is also the curator of the weekly newsletter, The Iranist. Follow her on Twitter: @hdagres.