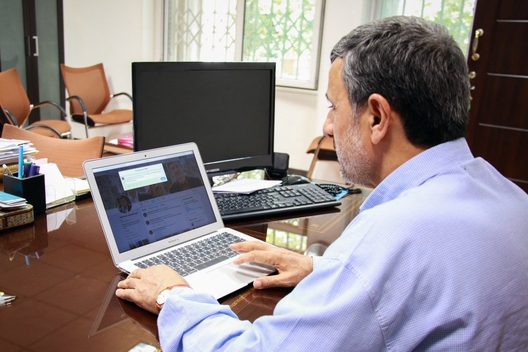 “Freedom has no limits; ideas and thoughts should never ever be limited … Any type of restrictions on ideas and beliefs especially on Social Media will lead to chaos and dictatorship.”

Probably the last person a Jeffersonian-style tweet would be connected to is former Iranian President Mahmoud Ahmadinejad.

Irony seems to be lost on Ahmadinejad, given that social media—Twitter, Facebook, and YouTube—were banned under his presidency after the 2009 post-election protests known as the Green Movement. For almost a decade now, Iranian internet users have had to rely on circumvention tools to bypass censorship, while the former hardline president tweets like it’s his day job—which is more and more becoming the case.

The ex-president isn’t the only Iranian official tweeting despite the ban. Over a dozen high-profile government officials are on Twitter, often in both English and Farsi: everyone from Supreme Leader Ayatollah Ali Khamenei to President Hassan Rouhani to Foreign Minister Mohammad Javad Zarif. Of those mentioned, the only person that seems to be tweeting on his own behalf is Zarif.

Ahmadinejad joined Twitter in March 2017 as part of a bid to run for a permitted non-consecutive third term in May 2017 presidential elections, but he was disqualified by the Guardian Council, which vets all candidates for elected office in Iran. The former Iranian president’s verified English account @Ahmadinejad1956 has about 64,000 followers, while his Persian language account has less than a fourth. Ahmadinejad’s Twitter bio reads: “Husband, Dad, Grandfather, University Professor, President, Mayor, Proud Iranian.”

Over the past year and a half, the former Iranian president has been a social media enigma. All of Ahmadinejad’s tweets are in English—leading many to believe that he’s not the author.

On the world stage, Ahmadinejad was infamous for recommencing and escalating Iran’s nuclear program, being a Holocaust denier, and peddling 9/11 conspiracy theories. On the domestic front, to those who were not enchanted by his populist message—and they were many—Ahmadinejad was the face of the brutal repression of the Green Movement protests that left dozens dead and thousands arrested. Ahmadinejad called those protesters “dirt and dust,” which is often brought up by Iranian Twitter users responding to his tweets.

During his two terms, many upper and middle class Iranians referred to the Iranian president as Ahmaghinejad or idiot-nejad. For them, he was an international embarrassment. They also criticized the populist president for not speaking English, especially since his predecessor Mohammad Khatami was a fluent polyglot.

In a popularly shared video from 2009, Ahmadinejad is seen shaking hands with Russian Prime Minister Dimitri Medvedev and responding to “How are you?” with a “Yes, happy new year.”

According to a Tehran-based journalist requesting anonymity, Ahmadinejad’s language skills have come a long way. The ex-president has been working on his English during the past five years since he left office and his tweets are his own—for the most part. This is believable when there are noticeable spelling errors such as “fallowing” instead of “following.”

To make a point that he is taking a crack at English, Ahmadinejad has posted several videos of himself thanking his followers over the past year. The latest was on September 10, where Ahmadinejad thanked his followers and requested they continue sending their comments, before ending the video with “stay strong and God bless.”

The Tehran-based journalist also said that the ex-president takes advice from his advisors, specifically on the topics of US politics and sports. Recently, Ahmadinejad defended tennis player Serena Williams’ catsuit on Twitter—which came as a surprise since Iranian women must wear hijab in accordance with Islamic law.

Ahmadinejad also tried to weigh in on the NFL controversy over former American football player Colin Kaepernick, by tweeting that it was a shame that Kaepernick was not playing this season (Kaepernick no longer plays for the NFL but recently snagged a lucrative contract with Nike). Ahmadinejad’s tweet caught Senator Ted Cruz’s (R-TX) attention, who then quoted the tweet and commented: “When a radical anti-Semite, anti-American Iranian dictator emphatically agrees with you, maybe that’s a sign that Beto, the NFL, and Nike are all on the wrong side of the American people.”

The ex-president has even taken things a step further by tweeting directly at US President Donald Trump on several occasions. After Trump questioned basketball player Lebron James’ intelligence on August 5, Ahmadinejad responded that “a President should love all, and not differentiate between them.” The ex-president then added that he loved James, as well as retired NBA players Michael Jordan and Mahmoud Abdul-Rauf.

On August 1, Ahmadinejad asked Trump to release the names of Iranian officials with green cards and US bank accounts. It was his way of fueling the fire from a recent fake news story on Fox News—that originated from Iranian state media—about how the Obama administration ordered 2,500 green cards for Iranian government officials to win them over while negotiating the 2015 nuclear agreement. Trump had tweeted about it on July 3.

Ahmadinejad also tweeted at Trump on the sixty-fifth anniversary of the CIA-MI-6 orchestrated coup against Iranian Prime Minister Mohammad Mossadegh. He told Trump that the coup was “the biggest sign of the real face of the United States Government without any mask or makeup. Isn’t it time to change this behavior?”

The ex-president has yet to receive a response from the American president, though some are rightfully worried it might lead to something bigger than just a Twitter spat.

So why is Ahmadinejad tweeting in English and chiming in on sports controversies? To attract attention and keep the focus on him. As Bloomberg journalist Ladane Nasseri recently commented on Twitter: “Ahmadinejad’s presidency was marked by many things. One of the constants was his keenness to attract attention and be in the spotlight.” Nasseri reminds us that this included crowd bathing, excessive touring of provinces, scandalous remarks, and endless awkward jokes.

Ahmadinejad is doing what he does best—on Twitter. Whether he is tweeting that politicians haven’t revealed the truth about 9/11, posting his qualms about the US dollar, reminiscing about his friend the late Venezuelan President Hugo Chavez, posting family photos or opining about “Zionist plots”—Ahmadinejad is trying to stay relevant.

Maybe it’s time we just ignore him. But Ahmadinejad is counting on us not to look away.