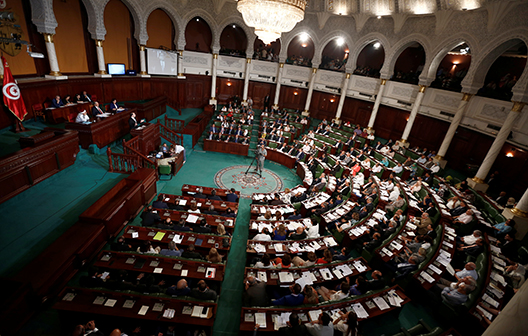 Much has been made of the recent resignation by Tunisia’s former prime minister Habib Essid and the appointment and parliamentary approval of his replacement Youssef Chahed as damaging to Tunisia’s political stability. In the aftermath of these changes, one former member of Tunisia’s National Constituent Assembly wrote, “Within the last 18 months, the parliament has been asked to vote on their confidence in the government four times, which does not bode well for the necessity of stable governance in Tunisia.” And Chahed himself exclaimed after taking office that Tunisia “can no longer afford a rapid succession of governments; the worst thing for this country is to see a change of government every year or year and a half.” However, Essid’s resignation and Chahed’s appointment, as well as all of the other changes in government that have happened in Tunisia since 2011, do not necessarily reflect any sort of political instability. Rather, they could be viewed as proof of the robust nature of Tunisia’s nascent political democracy.

Some of the criticism regarding Tunisia’s new national unity government stems from the belief that the new government was maneuvered by President Beji Caid Essebsi in a pursuit of more power. Chahed, a member of the ruling Nidaa Tounes party, has been characterized by some in local Tunisian media as a pliant ally of Essebsi who will govern in the president’s favor and follow his instructions. Others have reported that Chahed is a distance relative of Essesbi. This contributed to suspicion regarding nepotism within the government, as it followed what many viewed as an attempt by Essebsi earlier this year to engineer a hereditary transfer of power by appointing his son Hafedh as head of Nidaa Tounes. The incident prompted a split between the ruling party, leaving the Islamist party Ennahda with the majority of seats in parliament. Still, other figures close to Chahed reportedly describe Chahed as “an honest man” who “does not belong to any lobby.” Regardless, only time will tell whether Chahed will be able to deliver the “bold” reforms he has promised. In Tunisia’s new democracy, criticism of this new government should not come as a surprise; Essid’s government was not immune to criticism in 2015. The country’s political parties and alliances are still negotiating their roles in the political sphere.

The formation of a new unity government is also not necessarily a condemnation of Essid’s government, but rather an acknowledgment of the country’s need for a galvanizing force to push through necessary but difficult reforms. While Essid’s government did make progress on the security front – the maintenance of his ministers of interior, foreign and defense in Chahed’s new government is a reflection of that fact – progress on the economy over his 18-months in office has been minimal. In June, Essid said he would be ready to resign the post “if the country’s interest demanded it,” adding that “no one is indispensable.” Given the country’s difficult economic situation, a leadership change that would bring new faces into the government and spur new policies and strategies to tackle the country’s challenges would certainly be in the country’s interest. Moreover, Essid’s decision to call for a vote of confidence by the parliament does not necessarily show his resentment towards the president who wanted to oust him, but could more be a demonstration of his support of the democratic process; this is reflected by the fact that his decision to step down was determined by a parliamentary vote rather than a directive from Essebsi. Indeed, Essid said the parliamentary debate surrounding his leadership and the subsequent vote had “consecrated Tunisia’s nascent democracy.”

The shift from the more independent premiership of Essid to Chahed, whose political alignment with Nidaa Tounes is clear, is also a positive development for the country’s political system. Since 2013, Tunisia’s government has been led by a member of Ennahda and two technocrats. While some have called Chahed a technocrat, his is clearly a political rather than a technocratic government. This indicates that Tunisia may be past the point where political disagreements necessitate the formation of an independent and technocratic government. Rather, Chahed’s unity government, which is in many ways more inclusive than that of Essid, reflects political priorities of continuing to work with Ennahda, including more youth and women in the political process, and bringing in key power brokers – like the Tunisian General Labor Union– into the government. Chahed’s rhetoric during Essid’s formal handover of power on August 29, also suggests an understanding of the need for urgency in implementing difficult reforms. “We must succeed, we have no choice,” he said upon taking over from Essid, warning of an inevitable austerity program if the country fails to improve its economic standing by the end of the year. He has also signaled a strong emphasis on corruption, an issue that Essid’s government had struggled to tackle. It is worth noting that following his appointment by Essebsi, Chahed met with the head of Tunisia’s national anti-corruption agency and stressed his commitment to strengthen anti-corruption legislation.

It is also worth noting that Ennahda, despite raising some reservations, pledged to support and vote in favor of Chahed’s government. If Ennahda viewed Chahed’s appointment as simply a power grab by Essebsi, there would have been no utility in supporting the new unity government. Ennahda’s choice to support a new prime minister from Nidaa Tounes – as opposed to Essid, whose status as an independent was more beneficial to Ennahda – is significant.

Tunisia’s new government does not have to be viewed solely from a Machiavellian standpoint that paints Chahed’s appointment as a move orchestrated by a power-hungry president. While Tunisia has made great strides since 2011, major challenges remain. It is possible that Essebsi saw the removal of Essid and the formation of a unity government as the only way to force necessary changes and reforms to take place. Chahed’s new government may prove to be what motivates the Tunisian population to accept the sacrifices that will need to be made in order to push through reforms. Government rhetoric surrounding his new inclusive cabinet and the need for “audacious” governance certainly supports that possibility. Tunisia’s political progress has not been derailed as a result of this change in government. The question is whether this new government will be the revitalizing force that the country needs.

Elissa Miller is a program assistant at the Atlantic Council’s Rafik Hariri Center for the Middle East.