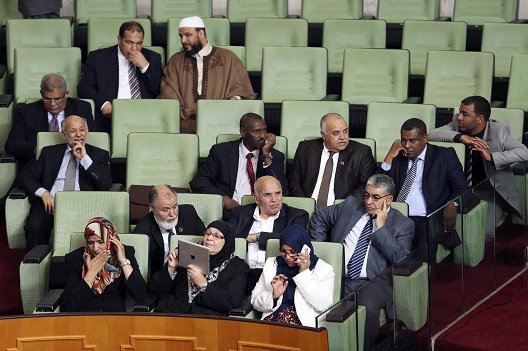 On July 29, forty-three members among a sixty-member Constituent Assembly in Libya, voted in support of the Libyan constitution draft. This voting has concluded a long and complicated process of debate that has been continued for more than three years to write a constitution that has the support of a two-thirds plus one majority among the member of the Constituent Assembly which was elected on February 20, 2014. Following this approval, the parliament should call for a popular referendum on this draft. According to the existing constitutional declaration, two-thirds of the voters should approve the draft and ultimately, enforced as a new constitution for the country.

For three years since its formation, the assembly has failed to agree on a draft constitution. Internal division has grown over the location of the capital, distribution of natural resources, the flag, the national anthem, distribution of members of the upper house and even the document’s preamble. But the deepest disputes are over constitutional guarantees of human rights and freedoms, citizenship rights, and equality, especially in light of controversy over the status of Sharia in the constitution.

Since the start of the Libyan revolution, talk of the role of Sharia has dominated political and revolutionary discourse. Most political players have sought to win over religious conservatives, a group that has grown since the revolution. During Libya’s independence celebrations on October 23, 2011, deputy Mustafa Abdul Jalil, head of the Transitional National Council, began a speech by prostrating himself on the ground then told the Libyan people that “any law that violates Sharia will be immediately annulled.” Accordingly, the first article of the constitutional declaration of 2011 enshrined Islam as the religion of the state and Sharia as the main source of legislation. In December 2013, shortly before the constituent assembly was elected, the Libyan parliament sought to preempt the body by declaring that “Sharia is the only source of legislation in Libya.”

Reaching an agreement on the status of Sharia in the constitution took a full three years of work by the committee. The first draft, issued in 2015, was deeply rooted in extremism and would have established a religious state, insisting that “Islam is the religion of the state, the rulings of Sharia are the source of all legislation, no legislation may be issued that violates this, and anything that contradicts it is considered void.” The article also required the state to pass the necessary laws to prevent the publication and propagation of doctrines that run counter to Sharia and practices that violate it. It is stated that this article be strengthened in the revised constitution.

There was considerable debate around this article at the time, resulting at last in the following wording, suggested in May 2017: “Islam is the religion of the state and Sharia is a source of legislation.” In Article 195, which lays out the measures required to change the constitution, the section enshrining Sharia as a reference point was fortified against any future alteration.

Lightening the load of religion in the new draft does not mean that human rights and freedoms have gained greater protection against future attacks. The status of Sharia as the single source of legislation, without any clear definition of what that means or any guidelines for forcing legislators to comply (and not including international treaties on human rights as additional sources of legislation) will mean that the fate of rights and freedoms is subject to interpretations by the majority in the house of representatives according to their understanding of Sharia, which by its nature is subject to multiple readings according to different schools of jurisprudence. The danger of this vague formulation was not lessened when the draft constitution placed international deals and commitments—including those linked to human rights—above the law. The draft gave such agreements a status below that of the constitution, meaning in practice that any legal mechanism to protect human rights and freedoms can be annulled if legislators see them as violating the rulings of the constitution.

Nor was the draft concerned with putting in place guarantees for achieving equality between citizens. Despite laws banning all types of discrimination between citizens, the proposal includes articles that discriminate between Libyans based on their gender and religion. For example, according to Article 69, only a “Libyan Muslim” can be a member of the house of representatives. Article 76 provides that membership of the upper house is also the exclusive right of Muslims. Article 99, which deals with requirements for becoming president of the republic, again restricts the position to Libyan Muslims—indeed, the president must have “two Muslim parents.” It is unclear in the conditions for candidacy to the presidency whether women are allowed to run for the office or not.

While the draft constitution of April 2016 required the state to pass laws guaranteeing protection of women, raising their position in society, banning discrimination against them, doing away with negative culture and social norms that detract from their dignity, as well as acknowledging the right of women to pass Libyan nationality to their children, the law did not outline how this was to be achieved, a shortcoming that threatens any possible gains. In the approved draft, the reference to women’s right to pass their nationality to their children was deleted entirely.

This backtracking in support for women’s rights can be partly attributed to the weakness of female representation on the committee. The body has sixty members representing the main regions of Libya—Tripolitania, Fezzan and Cyrenaica—with twenty representatives from each region. But the law provided a quota of just ten percent of seats for women, along with two seats each for Tuaregs, Tabu, and Amazighs. This system has been widely criticized by women’s rights campaigners, while Amazighs have boycotted the elections, meaning their seats have not been filled.

While the draft constitution envisions tightening restrictions on human rights, it also provides for the creation of a national council for human rights with the task of “establishing the values of the human rights and public freedoms found in Islamic law and international agreements.” But the wording does not guarantee the council’s independence or its right manage its own budget so as to avoid being subjugated to the government. The text also neglects to provide for the council including a quota of human rights defenders, in violation of the Paris Principles, a set of international standards which frame and guide the work of national human rights institutions.

It is deeply disappointing that the approved draft does not provide protection for human rights, but rather opens the door to abuses. The Libyan people’s decades of sacrifice demand that the committee seize this opportunity to put in place a constitution guaranteeing a democratic state that respects and maintains human rights. It is worth mentioning that the approval of this draft does not mean it was approved by consensus. Ten members of the assembly issued a statement refusing the way the draft was approved. They accused the assembly’s leadership of passing the draft in its entirety without reading or even reviewing it by the members.

Given its inability of writing a constitution that meets the demands of the Libyan revolution—strengthening rights, dignity, equality, and freedom—and amend the Constitutional Declaration to postpone the writing of a new constitution until after that political polarization has been resolved and stability has returned to Libya. Maybe it is better for the Libyan NGOs to kick off a wide campaign to discuss the position of rights and freedoms in the constitution. This might help Libyan citizens make an informed decision before heading to the ballot stations.

Ragab Saad is an Egyptian researcher who covers issues of democracy and human rights in the Arab world.

Image: Photo: Members of the General National Congress (GNC) wait for the ceremony to start the first meeting of the special body tasked to draft a new constitution for Libya, in Bayda April 21, 2014. The special body convened in the volatile east on Sunday. The body, drawn equally from all regions, will have 120 days to draft a constitution though analysts expect the process to take much longer given growing chaos as well as tribal and political divisions. REUTERS/Esam Omran Al-Fetori