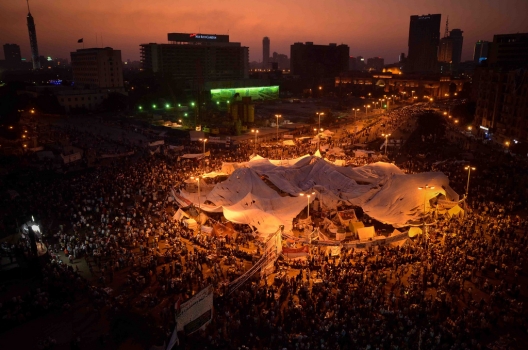 A bloody clash between two tribes in Aswan recently claimed more than twenty lives and left many wounded. On top of the current political struggle, the violations of rights and freedoms, and the danger of terrorism and violence, the blood spilled in the south is a harsh reminder that we do not live in a normal country, in a normal society, or with normal citizens. The great changes that have swept Egypt require solidarity and serious discussion of practical solutions that will only come from a cry for rationality.

I call on the government elite in official institutions and the political, economic, financial, and media elite allied with them to realize that our state institutions will not unite and surpass their current weak capacity through oppression, the tyranny of one voice and one opinion, nor through the violation of rights and freedoms, or ignoring the rule of law. The only way to build popular approval for the state and the government and to recover the true prestige of its institutions is to strive to maintain justice, to defend citizens’ dignity, rights, and freedoms, to allow for diversity, and to properly manage differences without oppression or coercion. Only then, and with solutions subject to the rule of law that combine security, economics, society, and politics and do not include the passage of oppressive legislation, will Egypt be able to face terrorism and violence and escape the disastrous toll on the state, society, and citizens.

I call on the government elite and those allied with them to realize that after the economic, social, security, and political crises it has endured, Egypt is in clear and present danger of becoming ungovernable. We need to heal our wounds, learn from our past mistakes, and look to the future. These wounds will be healed by transitional justice, which must punish violations of rights and freedoms and crimes of corruption and create a cohesive legal, political, and administrative regime to take over without repeating them. Learning from the mistakes of the past means realizing that the consequences of corruption are failure, and that the alliance between the government and the revolution is flawed. It means promoting democracy and development so as to create social justice and empower citizens to participate in public administration. Though the difficulties and risks remain great, the main hope is to bring stability to the state, justice to society, and happiness to citizens. Looking to the future means realizing that Egypt is prepared for progress, and that it is full of resources, including its people, environment, and inspirational history of civilization. For progress to take place, the government elite must win the legitimacy of popular approval. They must define a vision for progress that is coherent and plausible, and that will win popular support for its fateful decisions and difficult policies. This will not take place if the elite impose a single opinion and a single voice, suffocate politics, violate rights and freedoms, and strip the electoral process of any substance or content.

I call on the government elite and those allied with them ­– as they impose their will upon the people, in the coming presidential and parliamentary elections – to realize that the Egyptian people overcame the catastrophe of the 1967 war because the government elite and official institutions, especially the military, opened up to the civilian elite, and to the values of professionalism, productivity, and efficiency. The men and women of Egypt rose up in 2011 in search of dignity, rights, justice, and freedom. They were not conspiring against the national government or attempting to topple and dismantle it. Rather, they were attempting to save Egypt, protect it from tyranny and corruption, and to push it towards progress.

With the exception of a few statistical minorities infected with extremism, arrogance, and sectarianism, or those radicalized by the arrogance and sectarianism of others, most Egyptians want a democratic national government and just society far removed from religious or military despotism. First, they want an end to the violation of their rights and freedoms, and the implementation of a transitional justice program that promptly punishes criminals without mass sentencing. Second, they want the removal of oppressive laws, such as the protest law, and oppressive legislation, such as the amendments to articles in laws on the punishment of terrorism. Third, they want an openness to amending undemocratic articles in the constitution, such as those that gave exceptional, undemocratic status to the army, and the article that allows for the military trial of civilians. Fourth, they want anyone who has not participated in terrorism or other violent activities, taken up arms, or instigated any of the above to be allowed to participate in public and political life, as long as they respect the limits of the national government, do not mix religion with politics, and adopt the principles of transparency and oversight in their funding, rules of procedure, and external activities. These steps will help us all move toward progress, development, justice, and consensus going forward, will help preserve and normalize society, and allow citizens to rebuild their personal health and peace of mind.