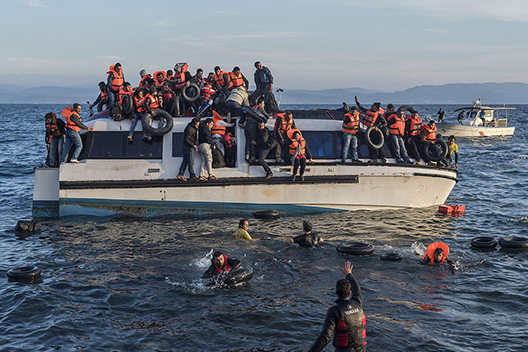 On May 4, 2016, the European Commission (EC) presented a draft regulation intended to overhaul the existing Dublin Regulation that has dictated the asylum application system in Europe for the past 20 years. By introducing a “fairness mechanism,” the idea was to establish a new system that imbibes solidarity among the EU member states.

The new regulation follows a recent EC Communication, which recognized the “inherent weaknesses,” and therefore the unsustainability of the existing Dublin system. By placing responsibility for the vast majority of asylum seekers on a limited number of member states that happen to host the EU’s external borders, the Dublin system had never been designed to ensure a fair sharing of responsibility for asylum applications across the EU However, the ongoing migrant crisis in Europe has only exacerbated some of the most disturbing implications of such a policy construct.

The new set of proposals for a Dublin IV system is momentous in that it addresses most of the shortcomings of the previous Dublin Regulations. By introducing an automatic mechanism establishing each member state’s upper limit of asylum seekers, the processing of applications would be based on the size of each state’s population and its GDP and a commitment to relocate all asylum applicants that exceed 150 percent of the established upper limit, to other member states. The new version of the Dublin Regulation has clearly set out to correct and reshape the current EU legal and policy framework related to refugees.

This proposal is further reinforced by the initiative to charge member states that do not implement the new system a solidarity contribution of 250,000 euros for each applicant.

The new EC initiative to address current imbalances in the EU asylum system is a welcome and well-founded change. But assuming it is adopted by the European Parliament, and by the national parliaments of the 28 member states, the success of Dublin IV will depend largely on the immigration flows remaining at the present levels, which significantly plummeted with the launch of the EU–Turkey agreement. The likelihood of this continuing is questionable given three concurrent developments.

First, concerns are mounting about Turkey eventually suspending its implementation of the EU–Turkey agreement on migration if the visa liberalization process falls through, or due to other circumstances in the future.

Second, Libya’s gradual ascent as an illegal migration time bomb, especially due to the absence of any viable government and stable institutions, could lead to up to half a million migrants taking the dangerous maritime route to Italy and Malta. The Italian coastguard rescued nearly 1,800 migrants trying to reach Italy from North Africa by sea in a 24-hour period last week, signaling an ominous surge over the coming period.

Against this background, there is little doubt that additional initiatives are needed to support and complement the proposed Dublin IV system. One such initiative might entail revisiting the resettlement scheme in its current form by expanding its geographic scope to reach not just regional but global levels. The idea would be to make use of all current and future EU cooperation and partnership agreements with third countries as incentives to participate in the resettlement scheme. Such agreements with third-party, non-EU countries could expand to facilitating returns and readmissions. This would include not only traditional host countries such as the United States, Canada and Australia, which to date have resettled relatively limited numbers of Syrians and Iraqis, but also major countries to the south of Europe, particularly in the Gulf region.

The proposed scheme could draw on replicable lessons from the Humanitarian Evacuation Program that the UN Refugee Agency (UNHCR) and the International Office of Migration (IOM) implemented in Macedonia in the 1990s. The program successfully established a system of international burden sharing that involved the evacuation or transfer of some of the refugees to third countries. Almost 96,000 refugees were transferred to 28 countries that agreed to host them on a temporary basis.

The proposed global resettlement scheme would be conducted on a voluntary basis. However, for the scheme to become attractive it would need to be based not only on humanitarian- and vulnerabilities-based considerations but also strive to address labor market and demographic factors. The proposed scheme should provide sufficient information on the “employability” of each person being considered for resettlement – such as education, languages, skills and professional experience, age, family structure and overall aspirations.

There would also be merit in organizing the scheme around two main categories: state-led and private. The latter would consist of adopting throughout the EU the very successful Private Sponsorship of Refugees Program that Canada has implemented for almost 40 years. Canada’s program relies on community and business organizations and smaller citizen-led groups that take responsibility for the refugees entering the country. Such support is not just with financial aid but also with skills building and the initial reception and integration processes. In Canada, between 5,000 and 20,000 refugees are privately sponsored each year. This figure is, of course, additional to the number of refugees resettled by the state.

While private sponsorship of refugees is currently implemented in only 15 of the 16 federal states of Germany and is being considered in the United Kingdom, extending it throughout the EU would clearly reduce the burden by productively engaging the private and non-governmental sectors. It would also encourage more EU states to contribute to refugee resettlement, since only 14 members are currently implementing annual resettlement programs.

A subsidiary variation to the proposed scheme would be to establish a purely business-led relocation and resettlement system that enables employers in the EU to fill both their skilled and unskilled labor shortages by tapping into selected segments of the refugee population in the EU and in selected third countries. While this system would likely attract criticism on humanitarian grounds, it would nevertheless open up and mutualize the benefits of resettlement and reduce the current deadlock in this major EU policy area.

This proposed global resettlement scheme ought to be preceded by a well-tailored, EU-led conference gathering all the member states, the United States, Canada, Australia and a selected number of countries south of Europe. Alternatively, or in parallel, it could also be introduced during the UN General Assembly high-level meeting on refugees and migrants that will convene on September 19, 2016.

Solon Ardittis is director of Eurasylum, a European research and consulting organization specializing in migration and asylum policy on behalf of national public authorities and EU institutions. He is also coeditor of Migration Policy Practice, a bimonthly journal published jointly with the International Organization for Migration (IOM).

This article originally appeared on Refugees Deeply, and you can find the original here. For weekly updates about the global migration crisis, you can sign up to the Refugees Deeply email list.