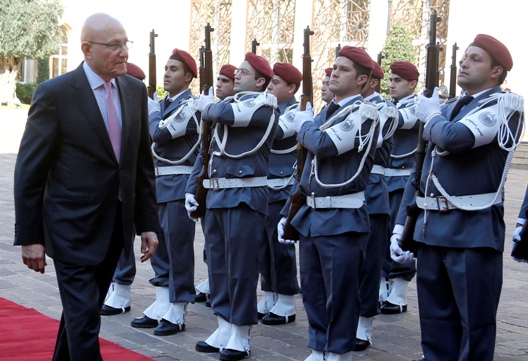 Lebanon's Prime Minister Tammam Salam reviews an honour guard during an official ceremony at the governmental palace to mark his assumption of duties as the new premier February 17, 2014. Lebanon announced a new government on Saturday, breaking a 10-month political deadlock during which spillover violence from neighbouring Syria worsened internal instability. (Photo: Reuters/Mohamed Azakir)

After ten months of stalling and infighting, Lebanon’s political factions have formed a cabinet. This does not indicate a broader political compromise, a willingness to tackle intractable and divisive issues, or a plan to address the country’s serious socio-economic problems. Rather, the cabinet’s significance lies in its makeup and the interesting compromises that led to its formation. These speak to the political calculations of key factions over the conflict in Syria, and reveal that Lebanon’s new cabinet will have a narrow and unambitious agenda. This cabinet is essentially a holding action by rival coalitions, allowing them to guard their basic interests while the Syrian war plays out, and to make a half-hearted, disingenuous, and likely useless attempt to defuse sectarian violence without addressing its root causes.

Cabinet seats are divided equally between the Sunni-led March 14 coalition which is opposed to the Syrian regime, a coalition led by the Shia group Hezbollah which is fighting on its side in Syria, and a third and ostensibly neutral group. All factions have enough seats to veto any policy initiatives they oppose. Further, the cabinet’s ministerial statement outlining its agenda will most probably make no reference to either Hezbollah’s maintaining a militia, or its controversial participation in the war in Syria—two key drivers of Sunni militancy in Lebanon. The cabinet’s structural paralysis probably rules out serious economic and legal reforms that would challenge entrenched political interests and patronage networks. Further, any major initiative taken by one faction will likely be vetoed by the other.

The attentions of Lebanon’s political factions are focused elsewhere. Over the past year, both sides calculated that waiting for a winner to emerge in Syria would allow them to better gauge their strength in Lebanon, and shape their political demands and ambitions accordingly. March 14 anticipated a regime defeat that would have seriously weakened its Hezbollah rivals in Lebanon, while Hezbollah preferred to wait for its military efforts in Syria to bear fruit and demoralize its domestic opponents. Yet a decisive outcome in Syria has not emerged, prompting both sides to renew their interest in short-term political compromise, albeit for different reasons.

By fighting against a Sunni-led uprising in Syria, Hezbollah provoked a Sunni militant backlash including bombings targeting Shia civilians in its South Beirut stronghold. It hopes that by keeping a political process going, it will defuse a potential cause for growing sectarian tension in Lebanon—the long-running political vacuum—while it continues the fight in Syria. Hezbollah also wants cabinet formation to facilitate presidential elections in May 2014, during which it hopes and can probably expect to secure the election of a non-hostile figure such as current Army Commander Jean Qahwaji. Political and security cooperation from the army and president will be critical for Hezbollah, as it continues to fight in Syria and expose its domestic flank to Sunni reprisal. Thus the priorities of Hezbollah and its key patron Iran are sustaining military efforts in Syria and containing sectarian violence in Lebanon. This explains why Hezbollah was willing to concede the Ministries of Interior and Justice to hostile March 14 figures in the current cabinet.

In March 14’s view, expectations of an imminent regime collapse in Syria were misplaced, and it must now reengage with Lebanese politics in the context of a balance of power that reflects continued regime survival. It has therefore agreed to drop its previous conditions for cabinet formation: that Hezbollah disarm and disengage from Syria. March 14’s foreign patrons, particularly Saudi Arabia, also recognize that Syria’s war is far from over, and likely gave it the green light to form a cabinet with Hezbollah. In the meantime, March 14 will have to make do with holding the justice and interior ministries, which are relatively powerful but, given the weakness of the state, unable to enforce decisions against Hezbollah, including disarming it or disrupting its campaign in Syria. Politically, it will also focus on pushing for a favorable electoral law ahead of parliamentary elections scheduled for November 2014.

In addition to ignoring the main drivers of sectarian violence in Lebanon—Hezbollah’s militia and involvement in Syria—none of the cabinet’s plans include dealing with the growing refugee crisis that is overwhelming public services, infrastructure, and the economy. Nor do they feature solutions to the lack of a new vision for the shallow, weak economy; rampant corruption; a dysfunctional public sector; a continuing brain drain; or the calamitous state of relations between the country’s two largest sects—the Sunni and Shia. Problems that can only be addressed through institutions are, as usual, banished from the discourse and agenda of government. Instead of governing, cabinets in Lebanon remain vehicles for securing parochial political interests in reaction to regional power dynamics, of which the war in Syria is just a particularly ugly and pertinent example.

Faysal Itani is a resident fellow with the Atlantic Council’s Rafik Hariri Center for the Middle East.