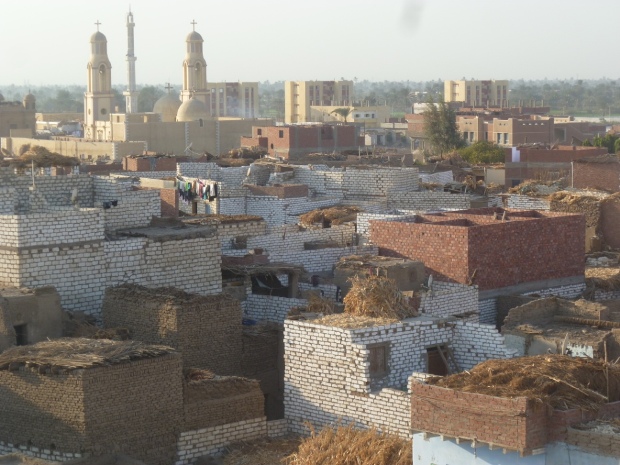 In many villages of Upper Egypt, the extended family lives together in the same complex. In a fair number of these families, however, there are no men present. Qufada, a small village in Upper Egypt, is no exception. High rates of unemployment force the men of the family to look beyond the borders of the village for work, often leaving their families behind.

The Coptic home of the now deceased patriarch, Shafik Khilla, in Qufada conveys few signs of luxury but has a dignity fitting proper village family life. The ground floor houses common areas such as the reception, kitchen, and bathroom facilities, as well as a place to store the family animals during the night. The upper level contains a single room for each of the five nuclear families who maintained residence. But is ‘nuclear’ a proper word when all the husbands are away?

Masry and Ruweiss, Shafik’s two sons, are elderly, peasant farmers like their father. Completely absent are the three young husbands of the home. Masry has three sons, Samir, Medhat, and Milad. Except for his first-born Samir who worked with him in the fields, he chose to educate them. Medhat, who also obtained a college degree, found work in a hotel in Sharm el-Sheikh on the Red Sea coast. Later, he was able to bring his older brother with him. They now each earn the equivalent of US$200 monthly, with rights to return home four days per paycheck.

Milad, meanwhile, found a job as a clerk in Cairo, for which he earns roughly the same salary and comes home just as infrequently.

Christians in Qufada make up roughly 400 families, in a community of around 16,000 people. They enjoy good relations and suffer no difficulties as a minority community. They supported Qufada’s own Salafi candidate Sheikh Hamdi Abdel Fattah in the recent parliamentary elections, who is esteemed as a local arbiter. Fr. Yu’annis, the village priest, says the family of Shafik Khilla is no better or worse off than the average Muslim family. Both religions see instances of poverty and wealth.

‘There is no opportunity to work in Qufada,’ states Fr. Yu’annis. ‘People finish their education, but because they have no land, money, or chance to open a project, they must search elsewhere. The only other option is to work the land as a peasant farmer. ‘ Work can be found in the nearby city of Maghagha, says Fr. Yu’annis, but it pays poorly and transportation costs eat a quarter of the earnings.

Sheikh Hamdi agrees. ‘There are few factories or businesses in Qufada,’ he states. ‘People do not have the means to start them, as the majority of people are poor.’ He estimates unemployment at 50 percent.

Both priest and sheikh relate the government provides no employment services. Neither church nor mosque can fill in this gap, though Fr. Yu’annis administers an extensive benevolence program.

‘Nothing has changed since the revolution,’ says Sheikh Hamdi. ‘If anything things are worse as the prices of basic goods have gone up.’

A generation ago nearly everyone in Qufada was an uneducated peasant farmer. Today, increased educational opportunities, side by side with lack of a vibrant local economy, lead many men to employment elsewhere in Egypt or abroad in Jordan or Saudi Arabia, for example. Sometimes husbands save enough money to return and relocate with their families to the regional city of Maghagha, or else Cairo.

Sheikh Hamdi states that over 3,000 village residents work elsewhere, totaling about half of the adult male population. The whole village tradition will be affected. Due to superior numbers, however, Muslims can better withstand the pressures of male emigration. The Christian community is much more vulnerable.

Amid the cries that Islamist government may whittle away the Christians of Egypt, a far more subtle phenomenon is underway. Christians, and their Muslim neighbors, are depopulating the villages of their ancestors, simply to find a better life elsewhere. Will Samir, Medhat, or Milad ever return to live in Qufada? How long can their families live there without them?

Demographic changes as these are not unique to Egypt. As the nation undergoes vast political upheaval, no less significant are these social realities. In fact, the question is fair: For the great majority of Egyptians, which is more significant – a president, or a husband?