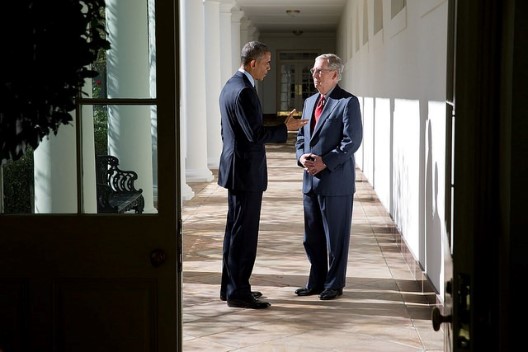 Despite unnecessary arguments from the White House that a brand new Authorization for the Use of Military Force (AUMF) for the war against the Islamic State (ISIS or ISIL), President Barack Obama decided to take the advice of the United States Congress by submitting a draft resolution to Capitol Hill. Yet, after reading an AUMF proposal that is both overly generalized and conditions-free, one cannot help but come to a simple conclusion: President Obama and his national security staff remain unconvinced that Congress needs to approve what it has been doing over the past seven months. Nonetheless, now that they have involved the legislative body, the White House needs to exert more effort in making the AUMF a workable document.

The product that President Barack Obama sent to Congress on Wednesday, February 11, is just the beginning of what will undoubtedly be a long and difficult debate on the war-making authority of the Commander-in-Chief, the limitations on the use of US ground troops, and the oversight Congress will exercise as the military campaign against ISIS proceeds. Critical national security committees in the House and Senate will schedule hearings to learn more about what the administration hopes to accomplish. Lawmakers from both parties and in both chambers will rightly feel compelled to modify the president’s proposal in order to tighten the language and ensure that Congress is a full and equal partner in the war effort.

Congressional input could drag out the debate for months, even as US aircraft continue to engage ISIS targets in Iraqi and Syrian airspace. But a full and honest, nationwide debate is precisely what the United States needs. President Obama’s draft as currently configured is at best weak on checks and balances and at worst a passé response to months of congressional hounding.

The draft AUMF is three pages long, which is not at all unusual for a resolution as weighty and important as authorizing military force. The problem, however, is not the length of the product but the content: how it is written, what is included in the document, and whether it is flexible enough to gain the buy-in of both parties in the House and Senate. As any president would do in a similar situation, Obama tries to thread the needle between members of his own party who are concerned that US ground forces will be deployed in the future, and a Republican caucus that is instinctively opposed to any provision that would unnecessarily limit the Commander-in-Chief’s power during a time of war. But in trying to find that middle ground, President Obama and his staff across the executive branch provide few details of the campaign, the administration’s military and political objectives, and the role it wants Congress to play once the authorization for military force is granted.

The main tenants of the AUMF include a three-year sunset provision that would force the next president to go back to Congress for another extension (if in fact operations against ISIS continue to occur at that time). It includes a ban on long-term, large-scale deployments of US ground forces, authorization against ISIS and “associated forces” who fight with or alongside the group, no geographic limitations, a repeal of the 2002 Iraq War resolution, and a requirement for the President to provide Congress with a report every six months on the strategy’s effectiveness.

Both parties have reasons to be disappointed by the president’s text. Many Democrats understandably look at recent history and cringe at a time thirteen years ago when Congress passed a resolution against al-Qaeda that was so short and uninhibited that it gave lawyers in the executive branch the opportunity to expand its meaning to groups that did not exist at the time of the September 11, 2001 terrorist attacks. The Democratic caucus likely looks at Obama’s draft AUMF for ISIS and see an uncanny resemblance to the 2001 authorization against al-Qaeda: time-specific, but incredibly broad as to which terrorist group can be targeted and where force can be used. Even Republicans who are reflexively prone to giving the Commander-in-Chief what is required to launch a sustainable military campaign, sympathize with this argument.

Therein lies the main problem in the administration’s ISIS AUMF. Its lack of specificity essentially repeats the mistake made thirteen years ago. If Congress wants to prevent something similar from happening in the future, the leadership and rank-and-file of both parties in the House and Senate need to stop complaining about what is or is not in President Obama’s AUMF and begin the work that is needed to refine it. As such, Congress should seek clarification on each of these tenants:

Obama’s draft is only the first step in a deliberative process that will involve every lawmaker in both chambers, all 535 members of Congress, each with his or her own opinion on the president’s power to wage war and their role during any military engagement. President Obama’s draft AUMF as currently configured is a skeleton of what it should be. It will be up to Congress and the White House to revise the draft into a more collaborative, more accountable, use of force resolution.

Daniel R. DePetris is an analyst at Wikistrat, Inc., a geopolitical consulting firm, and a contributor to The National Interest magazine.