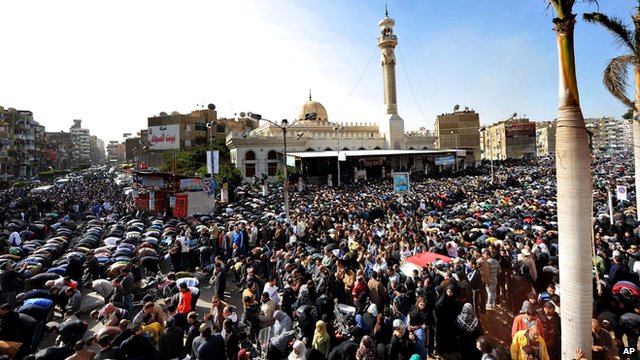 As protests continue to rock Egypt’s major cities, and the death toll rises, Egypt’s government and its opposition appear to be on a path to repeating the same mistakes made over the past two years.

In a short article about Prime Minister Hisham Qandil’s surprise visit to Tahrir Square in the early hours of Monday morning, State Information Service included a coincidental anecdote. While Qandil happened to be in Tahrir, security forces apprehended two “thugs” holding weapons and “big sums of money.”  The current government seems intent on following in the footsteps of the SCAF – and those of the Mubarak regime before it – using the same narrative in trying to explain away street protests as nothing more than paid vandals who want to undermine the stability of the country. In Morsi’s speech, he waved the same threatening finger, used by army generals and by Mubarak himself, so vehemently that he lost his place in his speech announcing the state of emergency in the three canal cities.

Morsi reminded Egyptians of his aversion to exceptional measures, and yet continues to use them. His November 2012 decree, expanding his already sweeping powers, was met with resistance by the Egyptian street. A decree instituting a state of emergency and a curfew in the Suez Canal cities, in contrast, has been met with outright defiance. At 9pm, as the curfew began, protesters marched the streets, and even held an impromptu soccer match outside the Ismailia governorate headquarters. Morsi took a risky gamble opting for a state of emergency, and as Egyptians defy the curfew for the second night in a row, his authority is undermined. He is once again in a position where he is considering backtracking, and may cancel the state of emergency in the three cities. That the president’s first response to the worst violence since he took office came in the form of a tweet certainly did not help matters. One TV presenter interviewing the mother of a man who died in the January 25 uprising struggled to find a way to explain the meaning of a “tweet.”

The government does not stand alone, accused of repeating the same tactics. The National Salvation Front (NSF), the largest bloc of Egypt’s opposition, continues along the same trajectory. The group insists on boycotting any efforts at national dialogue unless their five demands are met. Mohamed ElBaradei, a member of the NSF and head of the Dustur Party, described Morsi’s invitation to dialogue as “a façade.”

While many of their demands appear perfectly legitimate – amending the constitution for example – the longer that the standoff continues, the more the NSF’s list of demands grows. The most recent additions to the list include calling for the formation of a national salvation government, and a demand that the Muslim Brotherhood should be “subject to the law,” with the NSF stating that the group has no “legal or legitimate foundation,” pitting the president against the very group he hails from. And the larger the list, the less likely Morsi is to find a path to compromise. The NSF has found an unlikely partner, at least as far as one of their demands is concerned, in the Salafi Nour Party, who are also calling for the formation of a national salvation government – although the Nour Party disapproved of the NSF’s decision to place conditions on their participation in the national dialogue.

Attendance at the national dialogue talks was heavily Islamist, with Ayman Nour one of the few non-Islamist politicians making an appearance, alongside head of the Strong Egypt Party, Abdel Moneim Abul Futuh, former presidential candidate Selim al-Awa and head of the Salafi al-Watan party, Emad Abdel Ghafour. A press release published after the meeting placed emphasis on restoring security, but also addressed one of the NSF’s key demands: the formation of a committee to study changes to the constitution. The group also discussed making changes to the newly drafted election law for upcoming parliamentary elections, which both the opposition and women’s groups were critical of.

As protesters ignore President Morsi’s orders of a curfew, the urgent need for a sincere national dialogue grows. With Morsi’s history of an “illusion of compromise”, however, the NSF’s reluctance is understandable. Coming to the negotiation table is something that the NSF has resisted out of a sense of distrust, particularly at a time when members of the Muslim Brotherhood hold them responsible for the ongoing bloodshed.

There has to come a time when the government reviews the past two years and realizes that the same tactics will only bring about the same results – none of which are in Egypt’s best interest.

A gesture on the part of the Morsi government is needed to indicate that real change is possible. Acquiescing to the request for a national salvation government would go a long way to achieve a sense of consensus since this is at least one demand that has come from across Egypt’s political spectrum. Secular and Islamist politicians, together with the general street movement have all expressed dissatisfaction with Prime Minister Hisham Qandil and his cabinet, handed the arduous task of leading Egypt’s transition. While the current cabinet is admittedly light on members of the Muslim Brotherhood or its political arm, the Freedom and Justice Party, it is filled with holdovers from the Mubarak regime, and a new cabinet would likely be a source of appeasement for all parties. Genuine intent to amend the electoral law that will shape Egypt’s second post-revolution parliament could also rebuild the trust so sorely lacking between the political forces. Making these changes in an attempt to draw the NSF into talks seem the most logical first step to ending a cycle of street violence, protests and deaths.