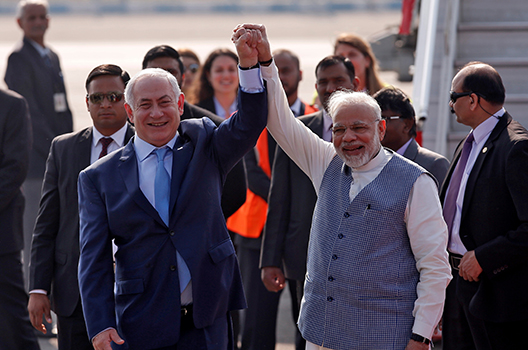 As Israel gears up for an election do-over in September, Israeli Prime Minister Benjamin Netanyahu will once again look to foreign leaders to bolster his leadership potential and diplomatic experience. In the wake of the high-profile visits to Russia and the US prior to the April 9 elections, Netanyahu is turning east this time, towards India to inch ahead of his main rival, Kahol Lavan.

The prime minister announced in early July that he plans to visit India before the next elections; according to diplomatic reports, the second-most populous country extended the invitation to Netanyahu at his initiative. While Israeli-Indian relations have received a boost under the leadership of Prime Minister Narendra Modi, Netanyahu’s intended passage to India comes at a time of increasing diplomatic and economic cooperation. Last month, for the first time, India voted in favor of Israel at the United Nations over a decision to grant consultative status to a Palestinian NGO. This vote will likely be leveraged as a further sign of India’s willingness to cast aside the post-independence, pro-Palestinian stance and instead, in the words of Netanyahu, “stand […] with Israel.”

New Delhi’s vote at the United Nations (UN) on June 6 is the latest sign of a deepening cooperation between Israel and India, and one that has affected the country’s voting patterns in international fora. In 2015, a year after Modi assumed office, in another diplomatic victory for Israel, India—together with only four other countries—abstained from voting on adopting the UN Human Rights Council’s report on Operation Protective Edge, a seven-week military operation led by the Israeli army in Gaza which led to a disproportionate number of Palestinian deaths and casualties. According to India’s foreign ministry, New Delhi’s recent vote at the UN was meant to ensure proper vetting of an NGO; nevertheless, the country’s decision to return the organization’s request to the application committee for further scrutiny was heralded by the Israeli government as clear sign of support for Israel and a vote against a “terrorist organization.”

Israeli-Indian relations have undergone a significant transformation in recent years. Although New Delhi recognized Israel in 1950, ties between the nations were long frosty, in part resulting from India’s desire to foment ties with the Arab world to garner support for claims to the disputed territory of Kashmir, a Cold War alignment with the Soviet Union, and India’s anti-colonial position.

Indicative of this latter stance, Mahatma Gandhi, leader of the Indian independence movement, consistently highlighted India’s steadfast support for the Palestinian cause, claiming in 1938 that “Palestine belongs to the Arabs in the same sense that England belongs to the English and France to the French.” In the wake of the 1991 multilateral Madrid Peace conference and an intentional pivot towards Washington, however, India decided to upend the prior recognition-without-relations policy and establish full diplomatic relations with Israel, becoming the latest major non-Arab, non-Muslim nation to do so.

In line with the pre-established foreign policy initiatives of Prime Minister Modi’s Hindu nationalist Bharatiya Janata Party, Netanyahu has sought to reinforce relations with India. In 2017, he oversaw Modi’s “ground breaking” visit to Israel, the first visit by an Indian prime minister in seventy years. One year later, Netanyahu reciprocated, becoming the second Israeli premier to visit the South Asian country. While Netanyahu has emphasized the nations’ shared threat of radical Islam, the leaders share more than a nationalist and––at times––exclusionary agenda. The increased strategic alignment between the nations thus hinges on India’s security objectives, in addition to water and agricultural needs.

Since 2014, India, which has longstanding territorial disputes with neighbors China and Pakistan, has turned to Israel for military hardware; India continues to be Israel’s most important arms market with sales worth an average of $1 billion each year. According to a report from the Stockholm International Peace Institute, India accounted for 46 percent of Israel’s arm exports between 2014-2018, which is 29 percentile points more than Israel’s second-largest recipient, Azerbaijan.

Last month, the Indian Ministry of Defense revealed that Israeli defense companies are engaged in nearly half of India’s current offset deals. One of these companies is Rafael Advanced Defense Systems, which signed a $100 million contract with Kalyani Rafael Advanced Systems Ltd. India (KRAS) in mid-July to manufacture and supply 1,000 surface-to-air missile systems for the Indian army and air force. According to reports, Rafael’s ‘Spice 2000’ missiles were used in airstrikes on alleged militant targets in neighboring Pakistan in February 2019 following a suicide bombing in Kashmir.

The joint venture between the Israeli company and BEL reflects Israel’s adjustment to the “Make in India” initiative launched by Modi in 2014 to encourage domestic manufacturing. Indeed, last month, it was revealed that India once again scrapped a $500 million arms deal for Spike anti-tank missiles after a domestic developer claimed it could deliver an alternative within two years—in spite of repeated attempts by National Security Advisor Meir Ben-Shabbat and Prime Minister Netanyahu to reauthorize the 2014 deal.

With the establishment of formal diplomatic relations in 1992, bilateral trade between Israel and India has also increased, from $200 million in 1992-3 to $5.84 billion in 2018. Beyond the ongoing trade in diamonds, investments, and human capital cooperation in the agricultural and water sector have witnessed—and will likely continue to see—significant growth.

Israel, which is one of the world’s leading experts on water management and irrigation technology, has offered assistance to address India’s water-related challenges and combat desertification. In a statement made last month, Israel’s ambassador to India, Ron Malka, thus noted that “as part of our growing partnership with India, Israel is keen to work together and share all its experience and cutting edge technology in our joint fight against desertification, including a strategic partnership on water management and water security.”

The current Chennai water crisis—much like the rest of the nation—is due to poor water management and limited clean water supplies despite increasing demand. According to a 2018 report by the government-run think tank NITI Aayog, 600 million Indians face high to extreme water stress while an estimated 200,000 people die each year due to inadequate or unsafe water. In an effort to address India’s water crisis, Modi has sought foreign expertise in water conservation and consumption, including from the Israeli private and public sector. Under the Indo-Israeli Agricultural Project launched in 2008, Israel’s agency for international development cooperation (MASHAV) has instructed thousands of Indian farmers on raising crop productivity by using improved irrigation and fertigation technologies.

In 2018, the India-Israeli Innovation Bridge, which helps Israeli startups leverage their technology in India, selected Aquallence to become one of only six companies to commercialize its water purification and disinfection systems in rural areas. More recently, in June, experts of Mekorot, Israel’s national water carrier, began assisting the northern Indian state of Punjab to develop and manage its water resources as part of an agreement signed earlier this year.

In his forthcoming visit to India, Netanyahu will seek to highlight the areas of increased cooperation as a result of his leadership and, simultaneously, as a sign of a waning international commitment to the Palestinian cause. Nevertheless, India’s attempts to downplay the significance of its recent vote at the UN demonstrate that—for now—New Delhi is trying to balance cozier relations with Tel Aviv with an ongoing commitment to the Palestinian cause.

Modi’s first visit to Israel thus was followed by a separate and equally-historic visit to Ramallah during which the Indian leader pledged to fund $41.35 in Palestinian aid projects.

Such a de-hyphenated relationship, as has been pursued by Modi in recent years, however, will become a more difficult sell to his Palestinian counterpart. A pre-election endorsement by Modi for his “dear friend Bibi,” who—with the backing of US President Donald Trump—is enforcing a more aggressive policy vis-à-vis Palestine, stands to challenge the viability of this hyphenation strategy.

Grace Wermenbol is a Non-Resident Scholar at the Middle East Institute. She previously served as a lecturer on the Israeli-Palestinian conflict at the University of Oxford and held a research position at Oxford’s Department of Politics and International Relations. She holds a Masters and PhD from the University of Oxford, where her research focused on the Israeli-Palestinian conflict.