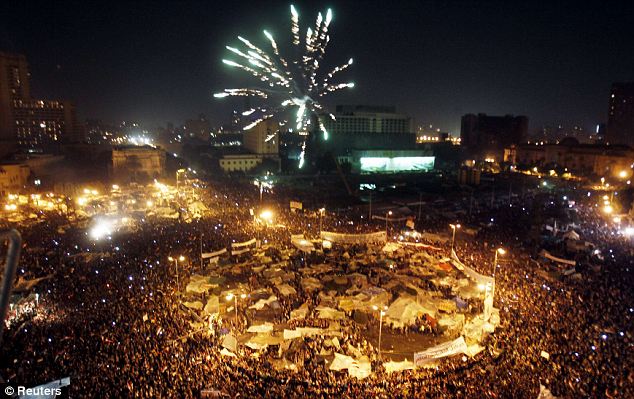 As the first anniversary of the Egyptian Revolution on January 25 creeps ever closer, the Supreme Council of the Armed Forces (SCAF) and the revolutionary groups have locked horns over control for the public perception of the popular uprising that led to the ouster of Hosni Mubarak and began the great Egyptian experiment in democracy. Whereas the SCAF, steward of the transitional period and self-perceived partner in the revolution, prefers to see the day as cause for national celebration of the unity forged between all Egyptians, the revolutionaries hope to issue a rallying cry to recapture the spirit of the revolution and reinvigorate calls for accountability and an immediate transfer to a civilian government.

Field Marshall Mohamed Hussein Tantawi issued a decree on Wednesday declaring January 25 an official national holiday. Major General Ismail Etman, director of the Department of Morale Affairs, likened the holiday to October 6 (in commemoration of the Yom Kippur War) and July 23 (the day of the Egyptian Revolution of 1952). He announced three separate celebrations: one for the revolutionary youth in Tahrir square to be allowed without interference from the military or security forces, a formal ceremonial procession, and “a musical concert to honor the revolution and its martyrs.” Although not explicitly stated, activists noted the stage constructed in Tahrir Square for this event.

Many activists have expressed disdain for the planned celebrations. Al Ahram Online quoted rights campaigner Nazly Hussein, saying, “The SCAF leads the counterrevolution… There’s no reason to celebrate the 25 January anniversary because there have been no improvements this year, especially in terms of social justice and freedoms.” Muhammad Radwan, activist for the revolution and blogger told the Atlantic Council, “The SCAF is trying to turn January 25 into a party and distract from the true goals of the revolution. They’re just trying to put people to sleep.” Youth groups have called for a separate march, dubbed “Friday of the Martyr’s Dreams,” in honor of those who gave their lives for the revolution on the Friday before January 25. They also plan to hold talks to educate the public of the reason why protests continue and to raise awareness of the coordinated smear campaign launched against them by the SCAF.

The ongoing information war between the revolutionaries and the SCAF over the January 25 anniversary presents yet another chapter in the fight for the hearts and minds of the Egyptian people. The SCAF previously utilized the crackdown on NGOs to suggest covert foreign manipulation, the arrest and military trials of prominent activists to sully their reputation, and the use of state media to label protesters as “thugs” in an attempt to assert its political autonomy and escape accountability. And these tactics have worked. The smear campaign has won over ordinary Egyptians, many of whom experience “revolution fatigue.” Activists, however, have not remained silent. Most recently, the Kazeboon (or “Liars”) campaign directly challenges the claims of SCAF officials in relation to crackdowns and violence against protesters.

The online-to-offline Kazeboon campaign, comprised of many different revolutionary groups such as the April 6th Movement and Mosireen (“We Insist”) to name a few, held rallies in different parts of Cairo and across the country since the beginning of this year. Campaigners pass out anti-SCAF informational flyers and screen independent documentation of military and security forces’ abuses against protesters that state media would not show and flies in the face of the SCAF’s public stance. (The name derives from the cover story published in Tahrir newspaper showing the picture of military officers beating the “blue bra girl” that shocked the world after Prime Minister Ganzouri promised violence would not be used against protesters.)

Revolutionary groups view the SCAF’s attempt to claim the iconic Tahrir Square as part of its celebration as disingenuous, at best, and blatantly antagonistic, at worst. With both groups competing over the message that the anniversary should deliver to the Egyptian people, the move will undoubtedly increase the potential for violence.