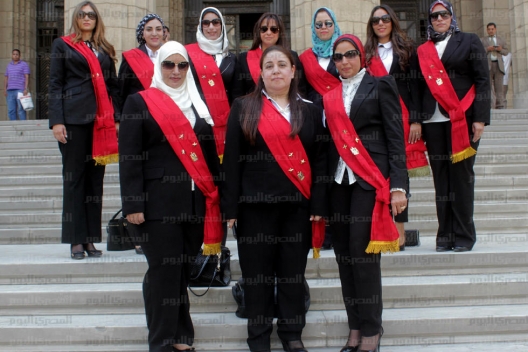 Last month, Egypt swore in twenty-six new female judges, in the largest appointment of women to the judiciary since 2007. This brings the total number of female judges in Egypt to around eighty. Shortly after his own swearing in, Justice Minister Ahmed al-Zend had announced his intention to appoint a group of female judges in an attempt to “eliminate all hurdles facing women’s work in the judiciary.” He added that, for the first time, women would also be appointed as deputies to the Minister of Justice. The latest batch of appointments, together with other appointments in the judiciary, are a positive development for Egyptian women in a field dominated by men.

Egypt follows a three tiered court system: the Courts of First Degree, (Mahkmat al-Daraga al-Oula), Appellate Courts (Mahkmat al-Esti’anaf), and Courts of Cassation (Mahkmat al-Naqd). In order to become a judge in any of these three tiers, lawyers must first join the public prosecution. With around 12,000 judges nationwide, Egypt has been taking small steps to address the inequities women face in the judicial system. There remain, however, many steps to be taken.

The Courts of First Instance, to which the twenty-six women were appointed, are First Degree Courts over which relatively young judges preside. At least forty-three women have been appointed to these courts in the past, and today, these judges are serving in Egypt’s Appellate Courts.

Within the Court of First Instance itself, three judges preside over trials: the Chief Justice is the highest ranking, flanked on either side by two Chief Judges. The Chief Judges are also divided into two ranks: A and B. The ranking reflects their experience and has no bearing in determining a final verdict, as the three judges enjoy identical privileges in this regard. Of the twenty-six new judges, eleven were appointed Chief Judges, and fifteen were appointed judges. Of the eleven Chief Judges, eight were ranked ‘A’ and three ranked ‘B.’

The Court of Cassation, of which there is only one, is the final stage of appeal and considered the peak of the judicial hierarchy in Egypt. Women have never served as judges in the Court of Cassation, but a significant milestone was achieved in this court shortly after the new appointments were made. The Supreme Judiciary Council (SJC) appointed Sally al-Saidi Aide to the Head of the Court of Cassation. Saidi is the first woman judge to be appointed in this position since the Cassation Court’s establishment in 1931. In 2009, Saidi also became the first female judge to serve in a criminal court.

Finally, there are a series of special jurisdiction courts which include the highest judicial power in Egypt, the Supreme Constitutional Court, Family Courts, Economic Courts, and the State Council (Mahkmat al-Qada’ al-Idari). In 2003, Tahany al-Gebali was appointed Egypt’s first female judge, serving on the bench of the Supreme Constitutional Court. In 2010, Dalia al-Namaky become the first woman to serve as a Chief Judge in the Family Courts. Women, on the other hand, have never presided over the State Council, a series of Administrative Courts that hear cases involving the state.

A History of Exclusion

There is no legal basis for the exclusion of women from serving as judges in Egypt. While Islamic law has often been used as an argument against female participation in the judiciary, several precedents indicate otherwise. In 1949, Aisha Rateb, a lawyer who had applied for a position at the State Council (Maglis al-Dawla), was rejected based on her gender. She filed a lawsuit against the government and Abdel-Razek al-Sanhouri, the then-head of the State Council, admitted that Rateb’s rejection resulted from “societal” and “political” dimensions. He said that Egyptian and sharia law do not prevent a woman from being a judge. Egypt’s highest religious authority—the Grand Mufti—issued several similar decisions. In 2006, Grand Mufti Sheikh Ali Gomaa said that appointing women as judges did not violate sharia. A similar fatwa was issued in 2013. Egypt’s current constitution also says, in Article 11, that the state guarantees the appointment of women in “judicial bodies and authorities without discrimination.”

Although it was not until 2003 that a woman was appointed a judge in Egypt, women have worked in the legal profession in Egypt since the 1930s. In 1933, Naima al-Ayoubi became the first woman to complete a Bachelor’s Degree in the Faculty of Law at an Egyptian university. Women now account for around half of the student body in the Faculty of Law, a quarter of the staff at the Administrative Prosecution, and there are at least seventy-two women serving in the State Litigation Authority.

The president appoints civilian judges, but not without the prior approval of the SJC. According to Human Rights Watch, up until 2007, the SJC often rejected women’s applications, at times openly admitting that gender was the reason, despite Gebali’s seat on the SCC bench. The Mufti’s 2006 fatwa, however, brought with it a significant turn of events. By March 2007, the SJC had received applications from 124 female applicants and by April 2007, thirty-one of them were appointed to serve as judges in first instance courts. The SJC appointed another twelve women in 2008.

After these gains, February 2010 brought with it a significant setback for women in the judicial profession. In August 2009, the State Council’s Special Board, a group tasked with vetting new appointments to the judicial body, announced that it would accept applications from women. Following the announcement, around 300 women applied to serve as serve as assistant representatives to the State Council and were interviewed. This prompted a quarter of the State Council’s General Assembly to request an emergency meeting, where almost 88 percent of the 380 judges voted against female participation in the State Council. At the time, at least one official reportedly claimed that allowing women to serve as judges violates Islamic teachings, ignoring the Grand Mufti’s 2006 fatwa. The Constitutional Court, however, ruled against the vote saying that women were constitutionally and legally able to serve as judges, and State Council head Mohammed al-Husseini himself ignored the ban on women, proceeding with the interview process. The General Assembly again convened, and the majority of Special Board members who had previously supported appointing women as judges reversed their decision. The interview process was put on hold, and consequently, women have never been appointed to serve in the State Council.

In January 2014, the issue again came to the forefront with a lawsuit filed in the Administrative Court against the President, Minister of Justice, and Head of the State Council by a female lawyer, Shaimaa Adel, who was prevented from applying for a judicial position with the State Council. Some male judges once again used the same arguments as in 2010 to prevent women from sitting on the State Council. State Council Judges Club Spokesman Judge Hassan Badrawy cited sharia and the political circumstances in his reasoning against women in the State Council. He added that the constitution does not “oblige” the judicial body to appoint women.

The state-run National Council for Women (NCW) publically voiced its rejection of this view. NCW head Mervat al-Tallawy addressed a letter to the State Council, calling on them to appoint women judges and saying it was a constitutional right. The Council’s response was to threaten a lawsuit against the NCW, saying that Tallawy’s letter “violated appropriateness and manners.” The letter ignored the issue of appointing women as judges.

The NCW, in particular Tallawy, however has shown no signs of backing down. With the appointment of the twenty-six new judges, Tallawy said, “Our respected judges eventually realized how vital it is to have female chiefs of justice in our society. It also shows that women in Egypt are suffering far less discrimination these days. The new appointment of female judges in first degree courts shows that our leadership respects people for who they are.”

Nancy Messieh is an Associate Director at the Rafik Hariri Center for the Middle East. Suzanne Gaber is an intern at the Hariri Center