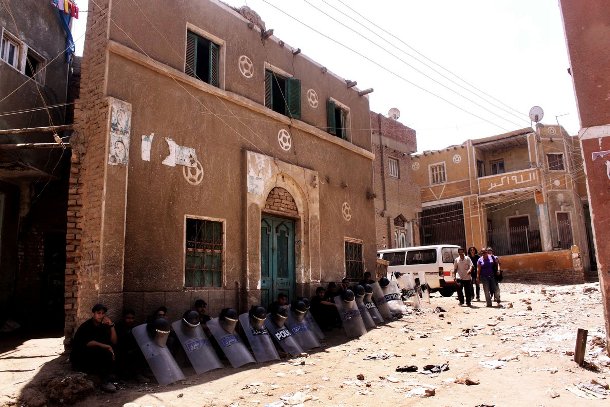 Egypt’s latest outbreak of sectarian violence taking place two weeks ago in the town of Dahshur has reignited discussions about sectarian strife in Egypt. A fight breaking out between a Muslim and a Christian deteriorated into violence, leaving in its wake several causalities, the death of a young Muslim man, and dozens of Christian families forced to flee their homes. Surveying public sentiment, it is possible to attribute these recurrent sectarian incidents to the state’s loss of authority and its failure to apply the law fairly to all. The rapidity with which the incident devolved into violence also underlines the absence of the rule of law in Egypt. The values of citizenship and of equality between Muslims and Christians are lacking, both a key factor in a widening sectarian chasm in Egypt.

Christians make up roughly 10% of the Egyptian population, and occasional sectarian conflict continues to result in deaths of both Christians and Muslims. However, these incidents are contained either by a temporary and often ineffective security presence, or more commonly, by traditional ‘reconciliation sessions’ in which perpetrators are never penalized. These meetings lie outside the justice system, and serve only exacerbate an insoluble crisis by allowing real offenders to escape punishment, and consequently feelings of hatred increase on all sides.

Over the 18 months since the revolution, incidents similar to the one witnessed in Dahshur have broken out across Egypt. Most are catalyzed by seemingly insignificant incidents, and in some cases church construction, unleashing mounting sectarian tension. In the case of church construction, this is something which can be resolved with the issuing of a uniform law setting fair conditions for the building of mosques and churches. Legislation previously required presidential approval to build or renovate churches, a responsibility which, in 2005, was passed on to governors.

The cause of these successive crises is the absence of the Egyptian state and its failure to target the root of sectarian issues. These incidents should be addressed by framing them not as taking place between Muslims and Christians, but as incidents taking place between Egyptian citizens. The biggest dilemma, however, is the fact that all those involved, whether Muslim or Christian, realize that the "state and the law" do not offer them protection and will not defend their rights. The absence of a state of laws drives citizens to take matters into their own hands, often resorting to violence, since citizens no longer feel that the state is able to protect them.

The state’s role has receded, with religious institutions taking its place, becoming the refuge of Muslims and Christians in the absence of guidance offered by the state and its laws. With extremism and a lack of awareness on both sides, Egyptian society has become more walled-off, deepening the gap between the mosque and the church and their affiliate institutions, such as schools and hospitals. An increasingly divided society belies the slogans of national unity espoused in patriotic rhetoric.

The state’s failure to play its role in Egypt during sectarian crises is noteworthy, allowing others such as the police and religious leaders to intervene and put forward solutions that prove problematic in the end, such as resorting to customary tribunals or forcing Christians to leave their homes in order to put an end to violence. Most recently, human rights reports stated that Christian families left Dahshur, fearing further retaliations. Returning two weeks later, they found their homes looted, despite the presence of security forces in the town. This raises serious questions about the neutrality of Egypt’s security forces.

Forced migration of Christians has become routine in the aftermath of sectarian incidents, with government officials either unaware or choosing to ignore the reality. It is a ‘solution’ that only deepens sectarian tension and heightens feelings of exclusion within Egyptian society among Christians. Whether the migration of Christians from their homes is voluntary or forced, in the end, they have left their homes, which cannot be described as anything other than collective punishment.

Solutions must be found to the crisis, outside the current framework of religious institutions and inept security forces, and must depend instead on a state of citizenship, which guarantees the safety and protection of all its citizens regardless of religion. Current concerns will not be addressed merely through the promise of a Christian vice president or the inclusion of Christians on the president’s team, as the presence of such a figure will not prevent the next clashes from breaking out. Accountability, awareness and exercising a fair and equal rule of law are essential in finding a remedy to an increasingly common problem in Egypt.