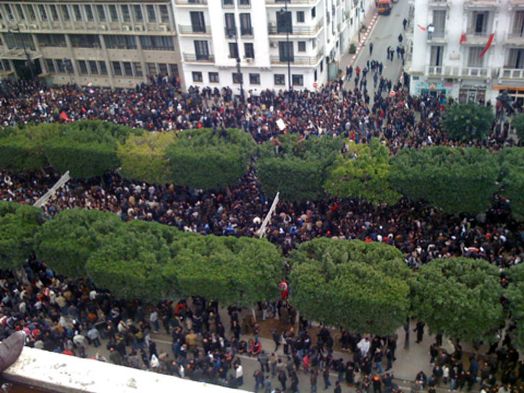 Although Tunisia’s transition appears promising, the situation remains fragile as parties and interests fragment society. Despite political differences, policymakers recognize the need to address youth unemployment. But slow economic growth and a failure of the economy to generate employment opportunities for the rising number of educated Tunisian youth necessitates a move towards a new development model focused on macroeconomic stability. Reforming the economy remains an immediate priority for the transitional government given its platform for supporting political progress and ensuring a stable transition.

Tunisia is not the only country in the region plagued by high youth unemployment. According to International Labor Organization’s (ILO) report on Global Employment Trends 2014, youth unemployment in the Middle East and North African (MENA) countries remains among the highest in the world, reaching 30 percent in North Africa in 2013. Tunisian youth, defined by the government as 15-25 year olds, compromise around 20 percent of 11 million Tunisians, but disproportionally account for over 40 percent of the unemployed labor force. The numbers reach even higher in inland governorates, pointing to regional disparities.

Recognizing that youth unemployment partly drove the 2011 uprising, transitional governments have chosen to address the problem by initiating public recruitment programs. This policy resulted in an inflated wage bill and swelling budget deficit. To mitigate mounting budgetary pressures the government has turned to the International Monetary Fund (IMF), signing a $1.75 billion Stand-By Arrangement (SBA) in 2013. Under the auspices of the SBA, Tunisian authorities began to scale-back public employment expansions and froze public sector wages. Despite this promising measure, the wage bill is estimated to consume 8 percent of GDP in 2014 accounting for new recruits in 2013 and employee bonuses.

In the past three years, Tunisia has borrowed $16 billion and will need another $2.8 billion in external financing to cover this fiscal year. The economy has been growing below its potential, as GDP declined to 2.6 percent in 2013 after a slight recovery in 2012. The interim caretaker government led by Prime Minister Mehdi Jomaa aims to increase growth to 4 percent. Even if the goal was met, it will not be enough to absorb the stock of current and future workforce. To do so, the economy will need to grow at around 8 percent and produce high-quality, high-skill jobs.

So, how can the transitional government begin to address youth unemployment in light of low growth? In the two decades prior to the 2011 uprising, Tunisia has grown at a steady rate, but the economy failed to produce jobs. Unemployment increased in 2011 to over 18 percent and remains high at around 17 percent. There are structural challenges that have contributed to structural unemployment, which the government can begin to address.

First, liberalizing restrictive labor market policies will have a direct impact on hiring more workers. In a joint report by the African Development Bank (AfDB), the Tunisian government, and the US government, researchers identified binding constraints to growth and employment in Tunisia. Constraints include high fiscal and regulatory costs of employing (and firing) workers, and barriers to entry, exit, and competitiveness of Tunisian companies. Moreover, financial sector barriers such as access and high cost of credit, restrictions on financial institutions and poor governance have placed Tunisia at 50 out of 185 countries in the World Bank’s 2013 Doing Business report. Undertaking financial sector reforms and streamlining procedural requirements will take some time but contribute greatly towards liberalizing labor markets.

Second, strengthening and consulting with the private sector will open up new employment opportunities. Currently, public services remain the primary contributor to growth, which is not enough to significantly reduce unemployment. Moving towards a strategy of engaging the private sector through public-private partnerships (PPPs) will help ease pressures on public finances and lower the cost and improve quality of public services. A regulatory law of PPPs already exists in Tunisia, but a new bill has been presented to the National Constituent Assembly (NCA) to amend the 2008 law to move away from concessions to a deferred payments system. Within this framework, there is also a need to ease business regulations to increase transparency and create mechanisms for accountability to attract foreign direct investment (FDI).

Finally, there is a need to reform the education system to produce graduates with skills that match private sector demands. The unemployment rate among university graduates hovers around 33 percent, and has been on the rise in recent years. It is no coincidence that there is large supply of labor but not enough demand in labor markets. This is because the quality of primary and secondary education is oriented towards a system of credentials as opposed to competitive skills.

There is a sense of urgency in addressing the mounting frustrations of young Tunisians, those who took to the streets in 2011 and can do so again if their aspirations as left unmet. It is crucial that Tunisian authorities develop and adopt a new vision for the economy and prioritize reforms that can have the greater immediate impact for delivering economic prospects for the young. This will have to be done within a framework of macroeconomic stability, structural reforms, and private sector investment to overcome the many constraints to economic growth.