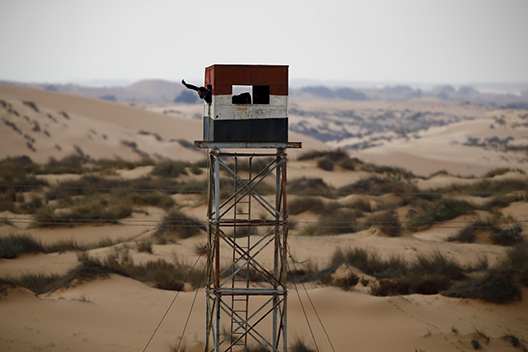 On July 1, 2015, Sinai State—the ISIS affiliated terrorist group —launched a massive operation across the Egyptian border governorate of North Sinai. The bulk of “The Battle of Sheikh Abu Sohaib al-Ansari,” named for the group’s deceased founder, took place around and inside Sheikh Zuweid: North Sinai’s third-largest city. Sinai State’s failed attempt to takeover a city of 60,000—trying to emulate ISIS’s roll through northeast Iraq—and the aftermath offer lessons learned about the group, about the Egyptian military response, and about the longer-term trajectory of the North Sinai conflict.

A year ago, after several hours of fighting, the Egyptian armed forces wrested areas of Sheikh Zuweid besieged by the Sinai State when the military called in air strikes. Although Sinai State maintains basic freedom of operation in the less inhabited areas of northeast Sinai, ISIS-linked fighters incorrectly judged that the Egyptian military would fold in a populated area as had the army in Iraq. It was a costly mistake. In the five days that followed, the Egyptian military claimed to have killed 241 Sinai militants in the process of repelling and retaliating for the July 1 attacks.

The medium- and long-term impacts of Egypt’s short-term military response initially seemed negligible. It was during the post-siege military campaign that the group fired its first rocket at Israel under the ISIS banner. It was a lame and ineffective attack, but displayed that Sinai State both survived and was able to continue operations during the onslaught.

In June 2015, prior to the Sheikh Zuweid siege, Sinai State claimed an attack on the Multinational Force and Observers (MFO) peacekeeping mission in North Sinai. Throughout the summer, Sinai militants continued their harassment of the MFO. In early September, Fijian and US troops ran over two of the tens of improvised explosive devices (IEDs) laid down around MFO checkpoints and outposts. The blatant risk to the MFO both initiated an Obama administration review and likely led Egypt to launch Operation The Martyr’s Right. According to data tracked by the Tahrir Institute for Middle East Policy, the military claims to have killed 2,918 suspected militants in 2015 alone.

Although there is no independent reporting in North Sinai, Egypt’s military campaign appears to have interrupted Sinai State’s ability to launch complex, multi-pronged attacks like the siege of Sheikh Zuweid—which was the culmination of quarterly large-scale strikes in Sinai since October 2014.

The ISIS affiliate has claimed IED attacks on Egyptian military and police vehicles, hit and run attacks on security checkpoints, and shootings and other attacks on policemen and soldiers on a semi-daily basis in the past year; but it was almost nine months before a Sinai State attack killed more than a handful of policemen in a single strike: at least 13 dead in a March 19 strike on the al-Safa police checkpoint south of al-Arish.

It is possible that, in the face of Egyptian military pressure, Sinai State has adapted its operations. Evidence for this theory includes the hundreds of IEDs on the roads of North Sinai in the past year, attacks against security forces further south and west in the governorate than the group’s standard area of operations, and certainly the October 31, 2015, downing of Metrojet flight 9268: in one terrorist attack the group killed 224 foreign civilians flying from Sharm al-Sheikh back to Russia.

If the group could not hold territory like ISIS, it could at least serve as an operational arm for ISIS in Egypt: exacting revenge against Bashar al-Assad’s Russian ally and the broader anti-ISIS coalition.

However, without insight into Sinai State’s internal planning, each of the above could also be evidence that Sinai State is weaker today than a year ago: unable to carry out larger insurgent attacks, the group settles for attacks carried out by smaller cells. While the impact of the Metrojet downing was significant, it did not require the numbers needed to execute a major attack.

An additional potential hint at Sinai State’s weakness is another failed operation, “The Battle of Sheikh Abu Ali al-Qaram”—another deceased Sinai jihadi. On January 14, 2016, an ISIS statement claimed Sinai State launched this multi-pronged operation south of Rafah near the Egyptian-Israeli-Gazan border crossing. The group claimed it engaged Egyptian border guards and used an anti-tank missile for the first time in three months; but using airstrikes the Egyptian military successfully thwarted what was, given the naming of the operation, likely intended to be a much larger attack.

However, despite setbacks for an ISIS-inspired state-building project, Sinai State has not given up its intention to govern territory. Through ISIS propaganda, the group projects governance activities such as distributing cash and food aid to the population of North Sinai while its “morality police” interdict cigarette and drug smuggling.

Egypt has kept Sinai State from actually resembling a state, but that does not mean eradication of the group is near. President Abdel Fattah al-Sisi recently said terrorism is confined to 2-3 percent of the peninsula—which, if accurate, is still 460-690 square miles in a strategic border area where much of the North Sinai population is concentrated. The regular attacks on police, soldiers, and civilians; the increased harassment of international troops and threats against Israel; and ISIS’s ability to send weapons and Egyptian recruits to the isolated governorate suggest Sinai State is still a threat to Egypt and its international partners.

Egypt now faces a paradox: its maneuvers during Operation The Martyr’s Right appear to have put pressure on Sinai State but they have also put real pressure on the local population, cooperation from which both the government and military recognize as necessary to defeat Sinai State. In September 2015 the Egyptian cabinet announced measures for easing civilian life in its comprehensive plan to combat terrorism in Sinai, but it is unclear if the positive steps outlined have been realized.

The US government and Egypt’s other international partners can help in two major areas: countering IEDs—the greatest cause of casualties and destruction in North Sinai—and border security assistance to block ISIS-guided assistance.

Both the United States and the United Kingdom have worked with Cairo-area Ministry of Interior specialist units to build capacity for IED detection and disposal. Expanded training of police and army explosives units could address a real and immediate threat to Egyptian security forces—and international peacekeepers—in North Sinai. More than just another defensive tool against IEDs, increasing the number of Egyptian that can effectively counter IEDs may also strengthen personal security ties between Egyptians and their international partners.

Finally, although Egypt may be keeping Sinai State under pressure within North Sinai, its attempt to isolate the governorate seems to be ineffective. The government claims foreign-trained militants “[possess] the ability to infiltrate [Sinai’s] borders.” In May, the US Treasury Department identified a Libya-based Sinai State leader serving as a conduit of ISIS financial and material support to North Sinai. The United States, Cyprus, France, Greece, and other NATO partners can assist Egypt with border security tools and training to better monitor the Libyan border, the Gulf of Suez, and North Sinai’s coastline for infiltration. US, French, and Russian naval craft recently procured by Egypt could be especially effective along the country’s long Mediterranean border.

With operational adjustments that protect the local population and with support and assistance from its international allies and partners, Egypt could be in a position to solidify its gains for the long term and rid Sinai of an ISIS threat for good.

Zack Gold is a nonresident fellow with the Rafik Hariri Center for the Middle East. Follow him on Twitter: @ZLGold

Image: An Egyptian policeman gestures from an observation tower is seen from the Israeli side of the border with Egypt's Sinai peninsula, in Israel's Negev Desert February 10, 2016. (Amir Cohen/Reuters)